Tzedakah: Jewish word for charitable giving, seen as a moral obligation.
There was no obligation on Saturday, however, just a lot of joy in being able to shop for children who otherwise might not have anything. This was our third year to travel south to Takoda Tavern, meeting up with Deb, GS, Gail and Irina (from our barn) and Kris and John (also horse friends) for our annual tradition. Deb, having posted our intentions on FB, had been gifted with donations from her network to the tune of 24 kids she could pick off the tree. 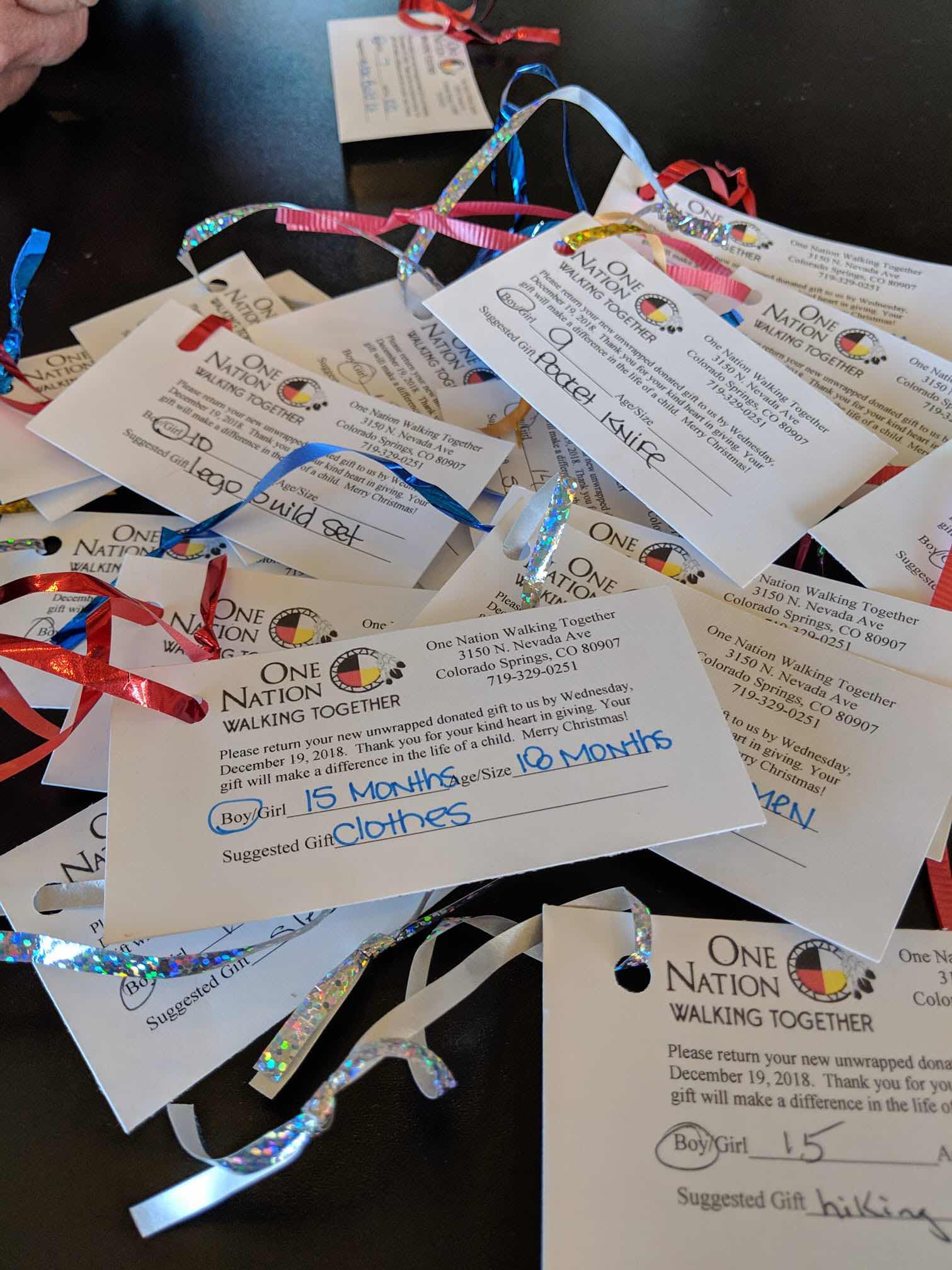 Deb pulled all of the cards on the tree for kids who were requesting clothes or shoes.
A total of 22 kids.
The place we met was Takoda Tavern in Parker. The cards were provided by One Nation Walking Together. One Nation provides goods and services to 11 reservations in 7 states, plus provides educational programs, powwows, film festival and a food sustainability program. I feel pretty comfortable with contributing to the project, since I feel confident that the gifts will actually reach their recipients. I had a 14 year old boy, a 5 year old boy, a 4 year old boy and a 6 month only girl. J had four boys aged 15 to six months,
The plan was to meet, pick kids, go to Walmart to shop and then return to the Tavern to eat lunch together. 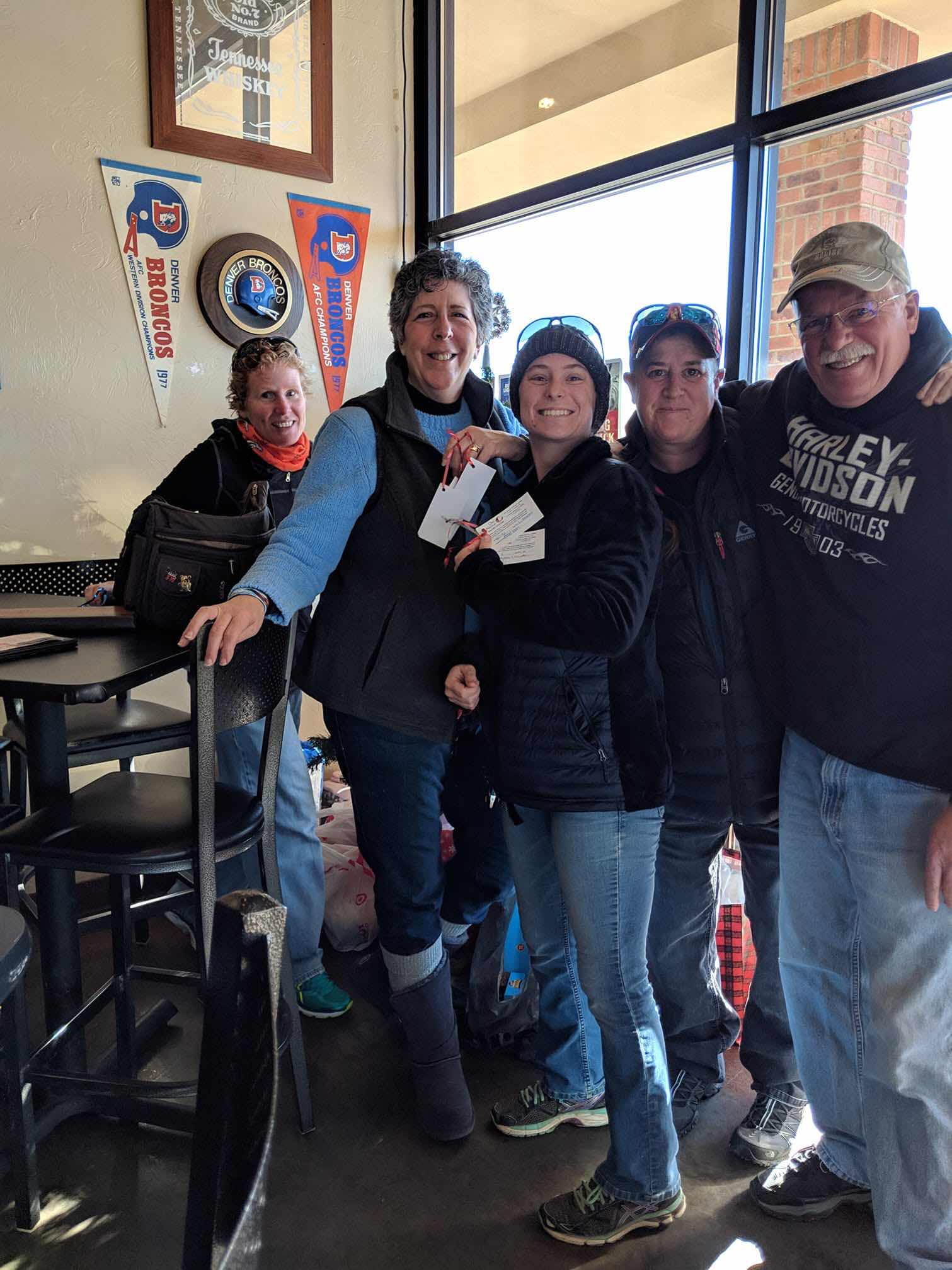 Intrepid shoppers
Shopping took some time. I insisted on picking up candy canes (the inch thick poles) and the filled candy canes (with sour sweetarts) to go in all the bags but the infant bags. Candy was always something I wanted when I was a kid and I had to get it for the kids. After that, we wandered looking for specific items. It’s been a while since we shopped for a kid and a lot of what was asked for was new or unknown to us, although J was not shy at asking those around us for guidance for some of the toys. When we finished with our shopping, we met up with Deb and GS, to help her finish up. She had a completely full cart of all types of items, organized by child by GS, who kept track of who had been shopped for and who else we needed. We were finally at the point where Deb had two kids to buy for, both teenaged girls wanting make up. J and I headed to the check out and let her go shop for makeup without us. At that point, it was going on two hours of shopping in Walmart and we were all hungry.
My phone rang and it was Deb, She was almost in tears, furious, demanding a manager in between telling me that her cart was gone. I told her we would finish putting the packages int the car and I would be right there. Walmart, who is not know for their efficiency, took Deb’s cart while she and GS were bent over picking out makeup brushes. GS swears it was less than 3 minutes between when he put the last set of makeup items into the cart and when he discovered the cart was gone. By the time they tracked it down, the girl had emptied it, stripped the wheels and left it derelict in the gutter. Deb was beside herself. Luckily, she knew what she had picked out and she and GS gathered the items out of the baskets they had been sorted into, in between demanding help from management.
I do have to say that the manager stepped up. Not only did he help GS and Deb find the items they needed, but he personally checked us out, child by child. Each gift went into a separate bag, and Jenn secured them with the tag before they went into a new cart. I helped GS sort and match items, while Deb raced around the store picking up the last of the items she needed. Deb always gets whatever is on the card, but then she supplements the gift with a set of socks and a hat, or hat and gloves. Her heart is so huge. Finally, the last of the items were in their bags, tags attached and payment made. The manager helped there as well: he gave Deb a $50 gift card toward the cost of the goods (and to compensate for the mistake). It helped. 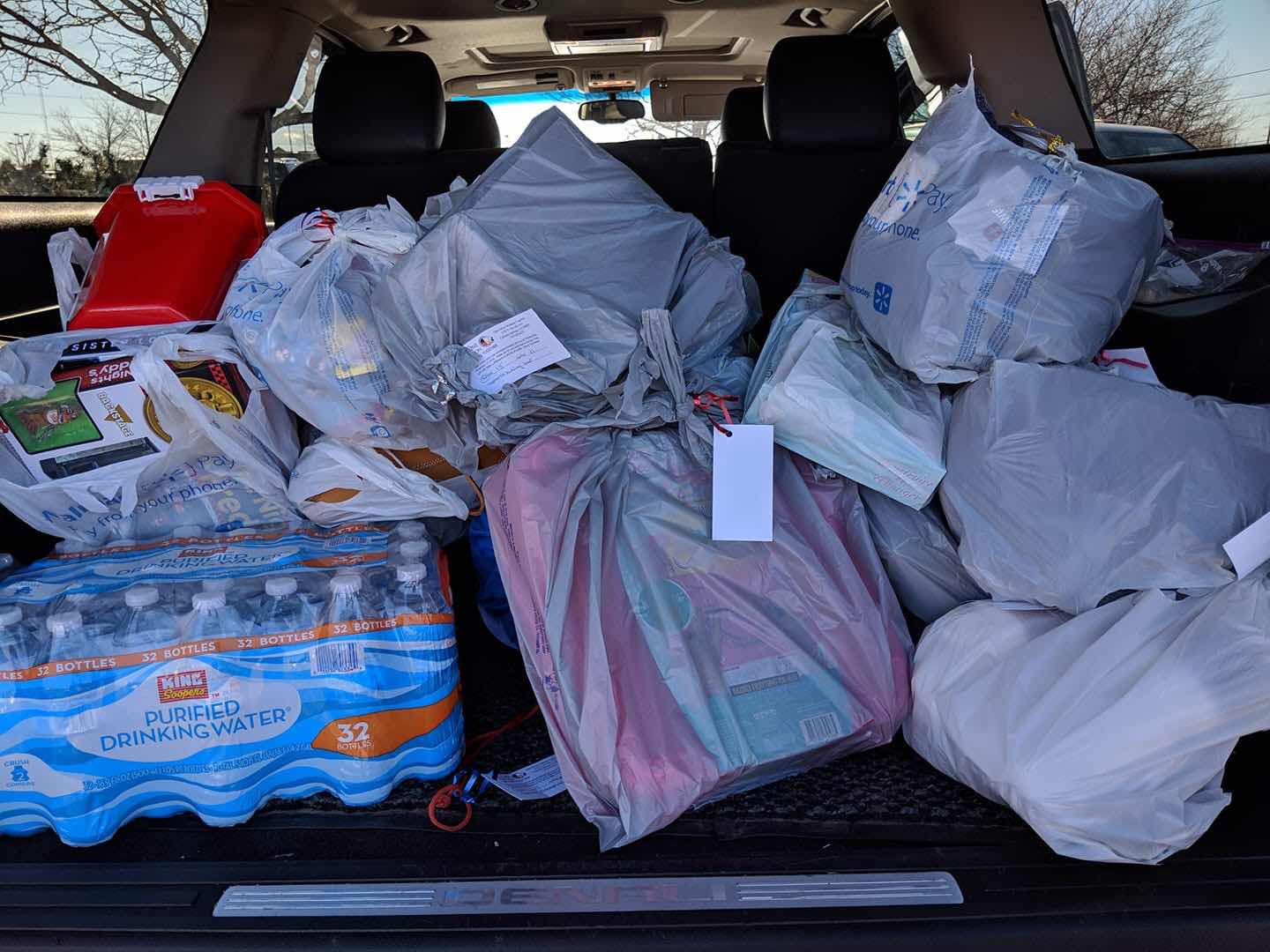 The back of GS car 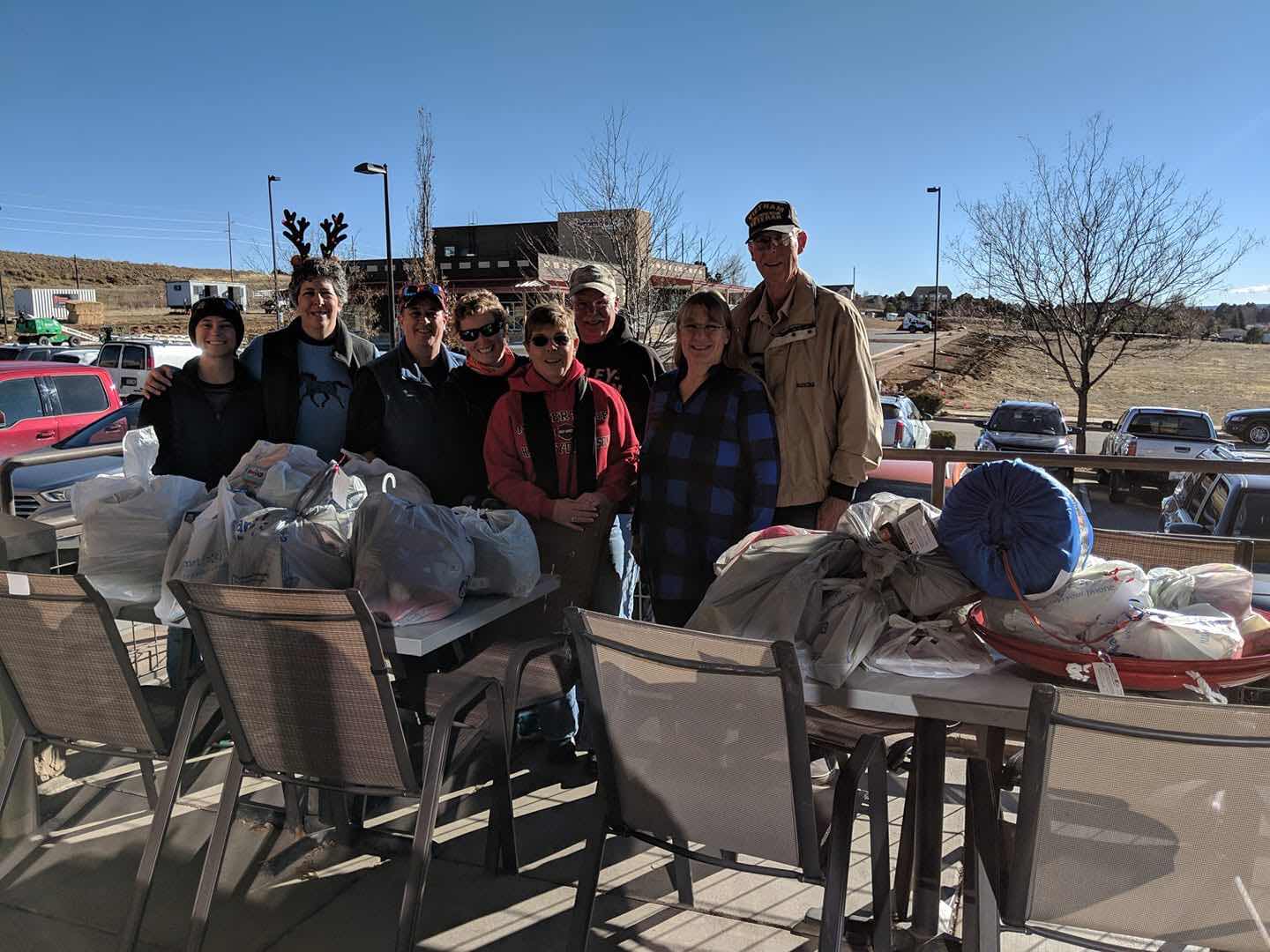 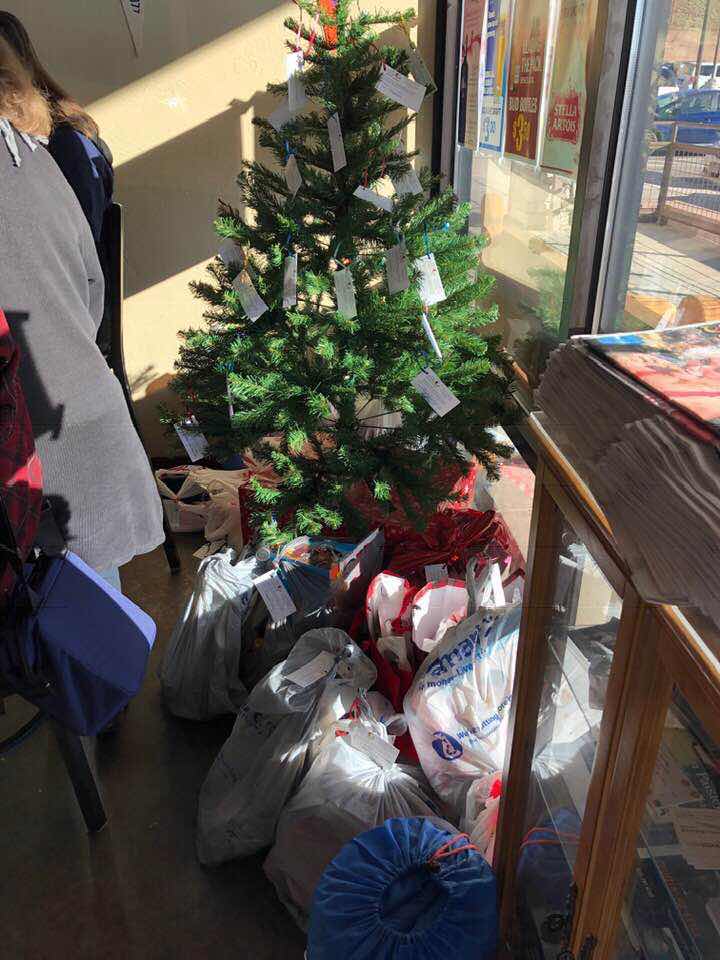 Some of the 43 gifts we brought back.
Deb was still getting texts from her friends while we were shopping and kept adding items to the list. 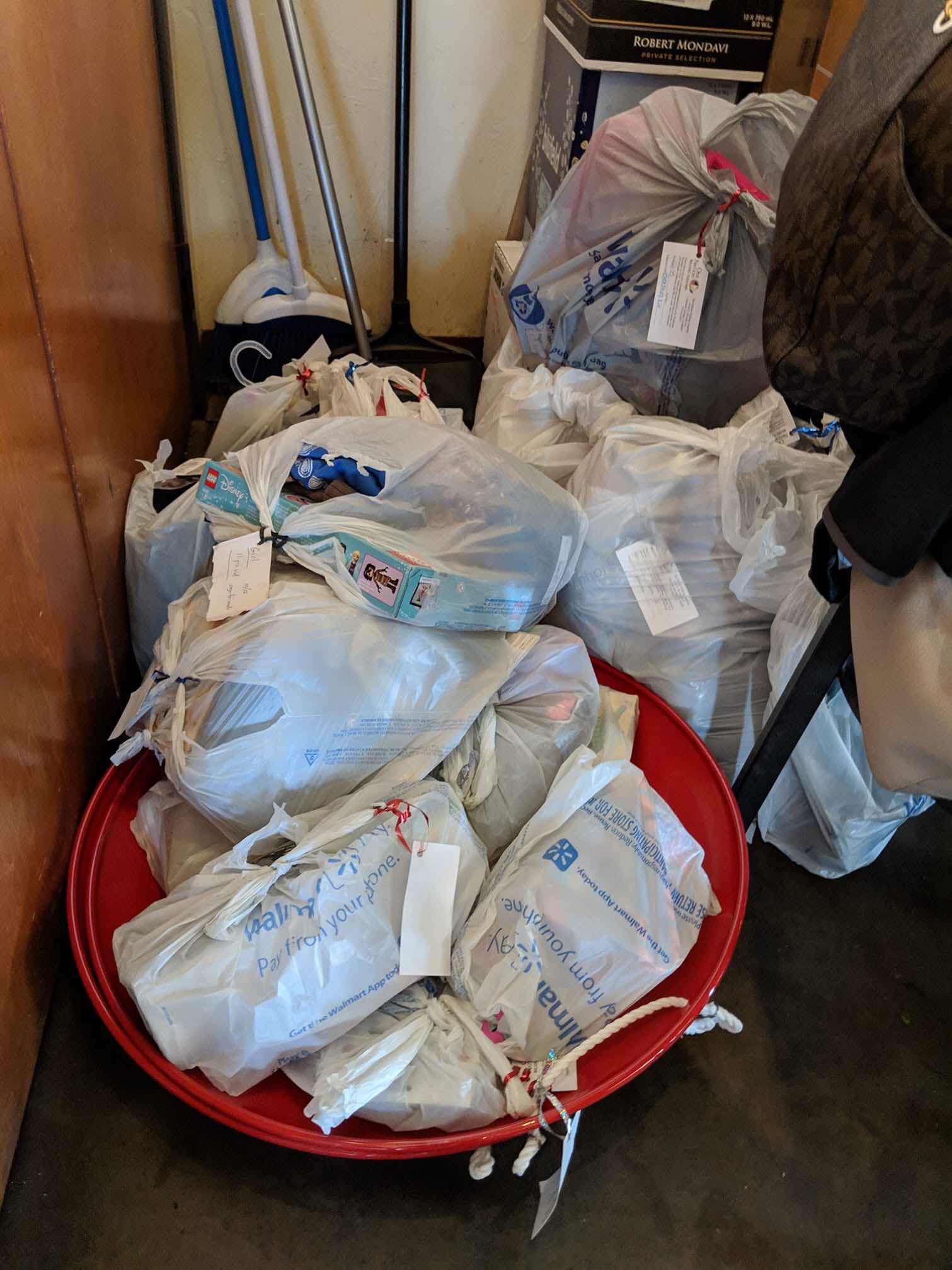 There was not enough room under the tree, so the rest of the gifts were stacked in the back.
Then we sat in the sun, sharing laughter and stories of horses, while eating great tasting food. There were some beers, some fireball Jack Daniels, a lot of joy and light and just simple celebration of life and the season. Gail and Irina, Kris and John have already committed to joining us next year. Deb and I agreed to finalize the day earlier so we can get the word out, because a lot of other people would have joined up if they could have arranged their schedule. It was a great day.
Posted by Cricket at 4:29 PM