December, for me, is one of the busiest times of the year at work and at home. So much going on and so little energy to deal with it. I have not been able to find time to write, primarily due to lack of energy, lack of time, lack of anything really interesting to talk about.
So . . . 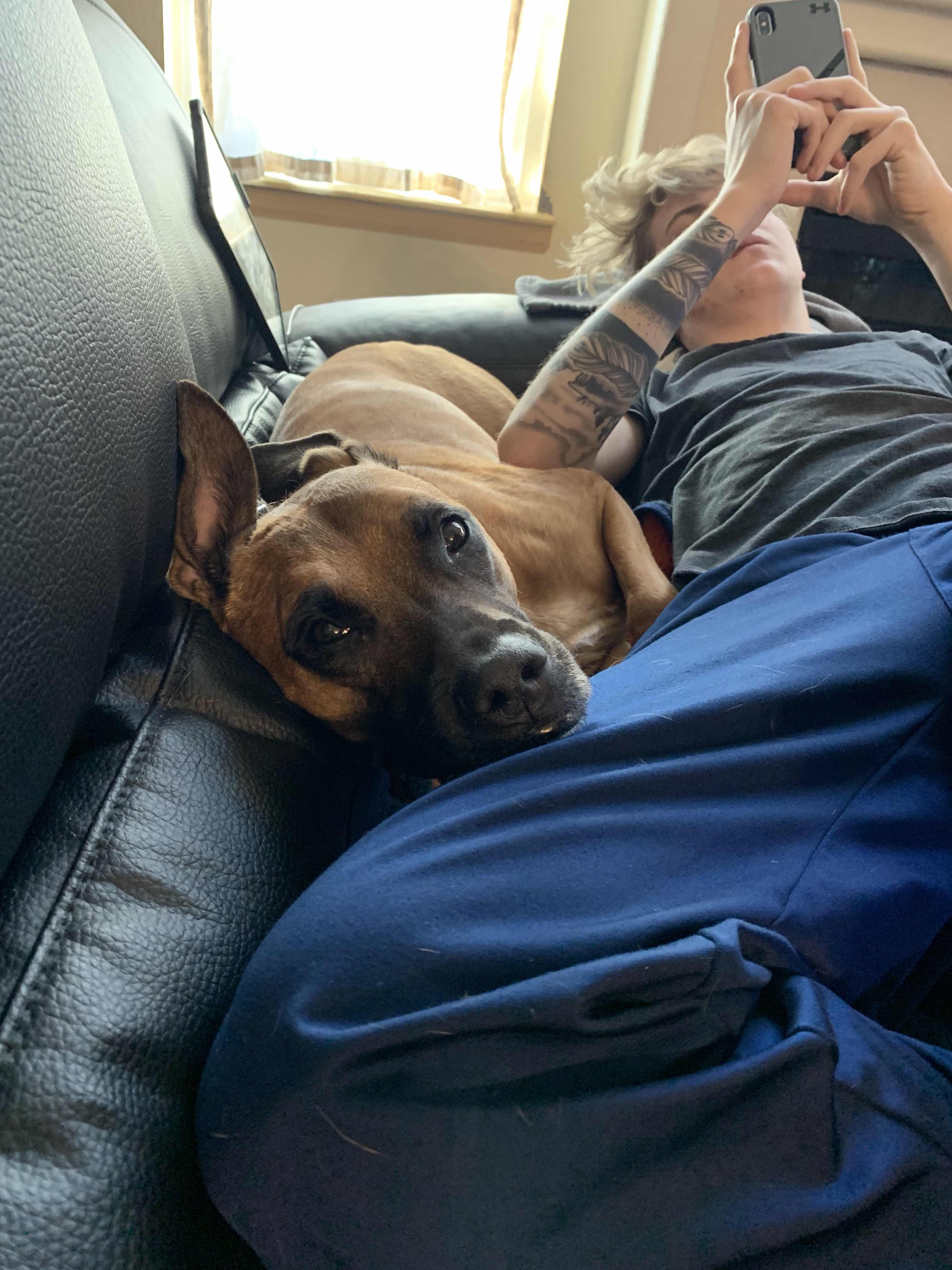 Lily still under the weather from her second start of winter bronchial crap.
The official diagnosis was kennel cough, but I think there must be something else going on with her, given this is the second year in a row, her sister never gets the crap, the antibiotics don’t seem to do anything other than upset her stomach, and she hasn’t been exposed to any other dogs.
She is improving, but it is slow. 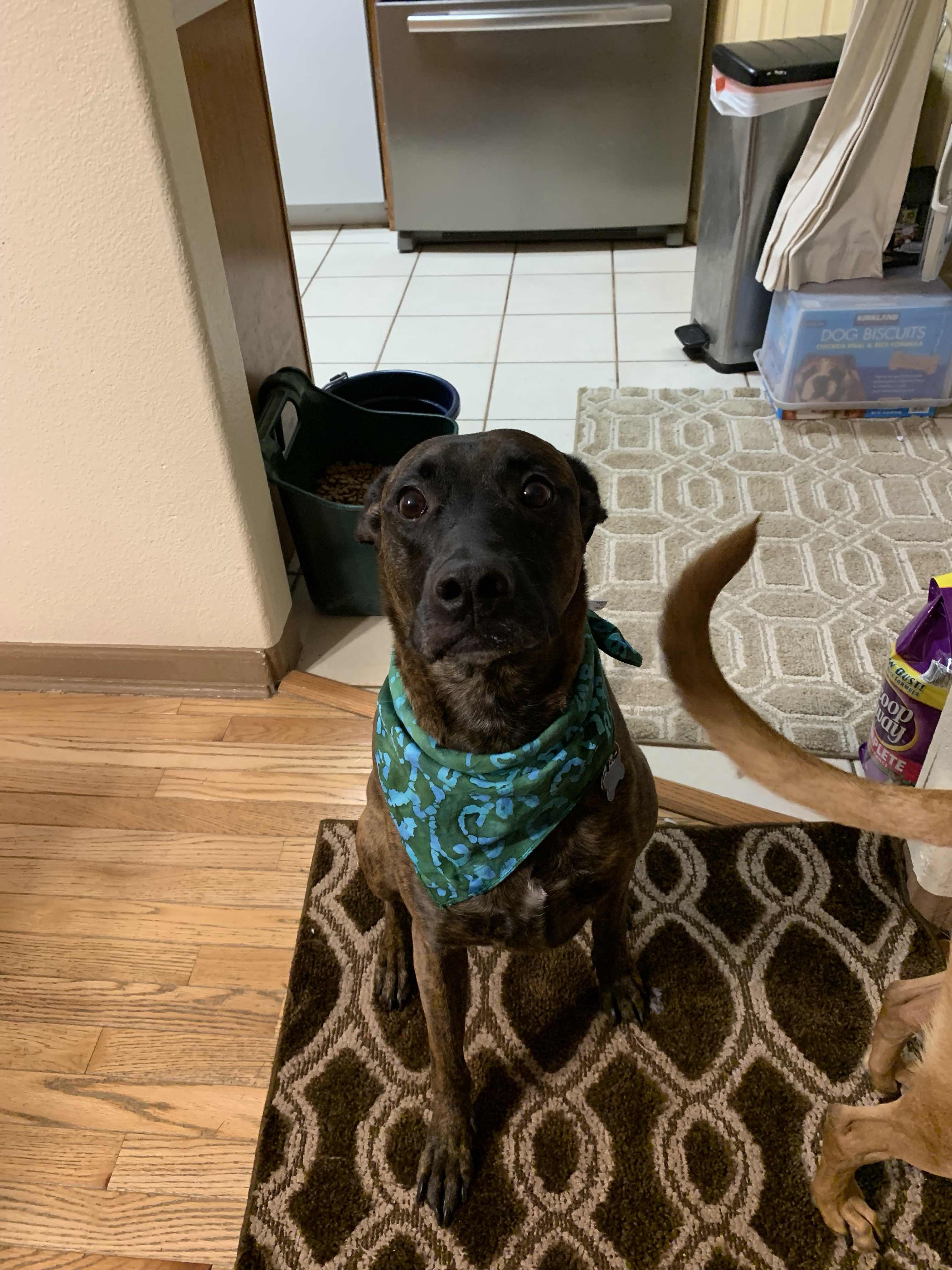 Skittle modeling her new bandana, which she thinks makes her look very swelty,
I am taking it off when we go to bed, since I don’t want it tangling around her neck while she sleeps, and it’s the first thing she asks for when I get up in the morning.
Riding:
I am riding three or sometimes four days a week. The extra time off while trying to teach flying changes actually seems to help him adapt and learn. We have moved from figuring out what I am asking for, to working on only giving me a change when I ask for it. This means I sometimes ride several circles in the same direction for three or four circuits before asking for a change. He now knows what I want, it’s more a matter of me figuring out how to time my cue correctly, on the straight away, and then asking for new bend afterwards. We have also increased the difficulty by riding the change after a canter half-pass. I have also started working on the pieces for The L5 dressage test, if for no other reason than to expand the exercises we have to work on. Currently, I am struggling with a leg yield from D to E to a 10m half circle to X. It’s a change in propulsion that I just have not worked out yet. Something to address in lessons.
The changes have had their effect on Ashke. We did.a chiro appointment today and he was sore in place she expected him to be sore. 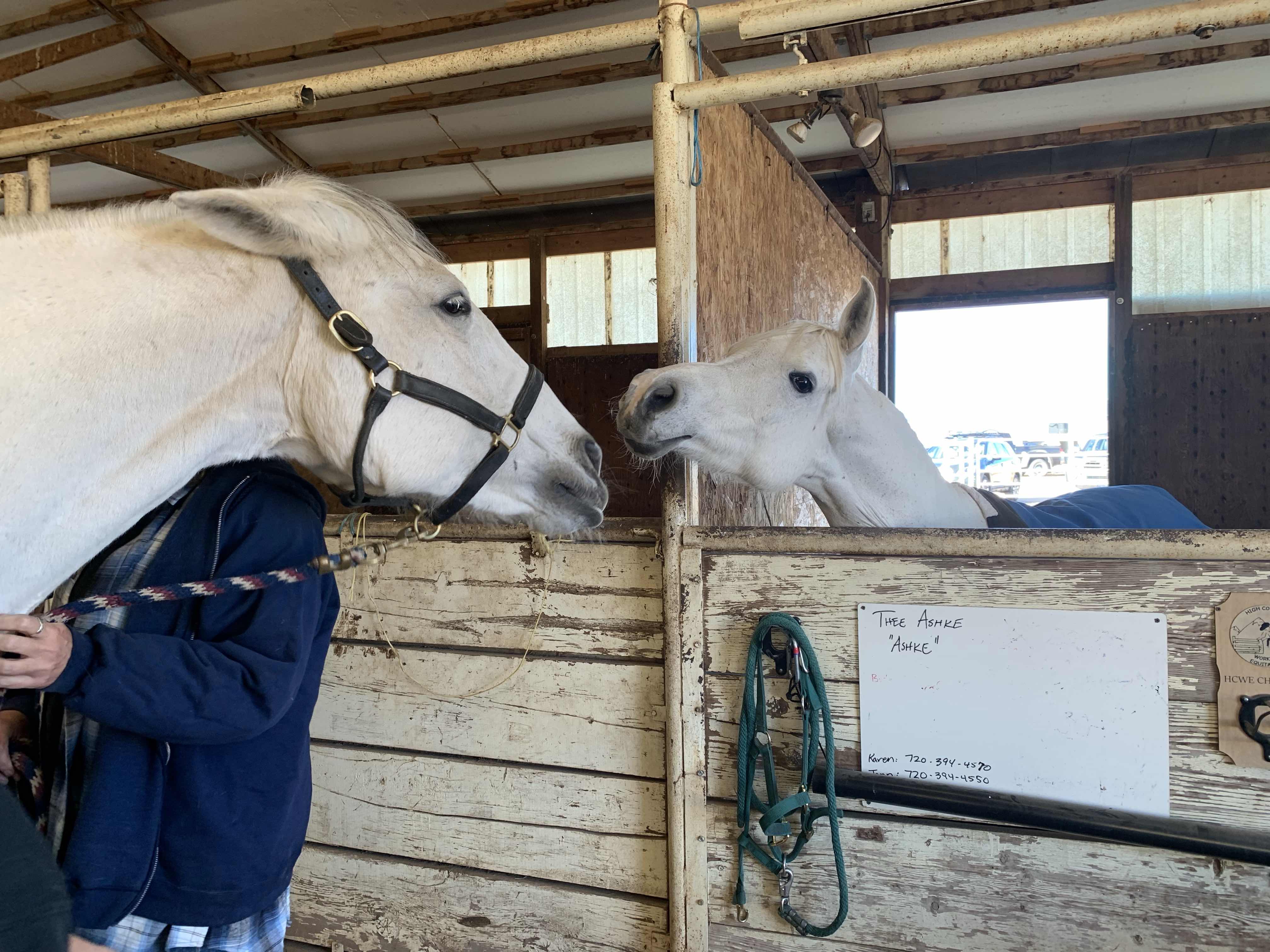 Ashke making time with Rain.
They have a hate-love-hate relationship
So, we had four horses on the docket for the chiropractor this morning. JJ had said she would be there about 8 to get some of her stuff done, turn Rain out, clean tack, etc before the appointment. When I got there at nine, they had already started on Rain. My goal was to hang out and see what was going on with JJ’s horses before having Ashke done. (I would have gone first, if JJ hadn’t volunteered.) Rain had a regular amount of things that needed to be addressed and then it was Sal’s turn.
Sal always scared me at Morelli, since he was so over the top in his reactions to everything going on around him. He is blind in his right eye, due to breaking his head in four places in a freak accident in his stall at Morelli. Because of the swelling that occurred, he because retinal blind due to pressure on the ocular nerve. Additionally, he’s a freaking big horse. I’m really more of a short horse type of girl. He has gotten much calmer and sweet at Owens, plus we were able to separate him from Rain, which has also helped his mental and emotional stability. JJ has been dealing with hocks (injected) and intermittent lameness. Since we ride together so much, I have watched him go, had some theories about what was happening in his body, and kind of talked JJ into trying my chiro. I was very curious as to whether I was correct in what I was seeing in his movement.
Because Sal is blind, we had to be very careful when working with him. His hind end was a mess and he definitely needed to be adjusted. At one point, I was bracing his body so he would weight both hind feet while Dr K was working on him. He was sore in his lumbar, his hocks, his SI, his intertransial joint (something like that anyway), his hips, and his stifles. And that was just the hind end. She did work on his front end as well. While I was helping keep him still and steadying him, he would turn his head and snuffle my neck. He was being super sweet and cuddly. When we were finished with the tall drink of water, it was Ashke’s turn.
He was pretty sore. Part of it I was expecting, since there was a contusion on his left shoulder from an impact that was solid enough he had broken skin even under his heavy winter blanket. I knew he was telling me things hurt, which was why I contacted the doc to come out. His left side was sore, not necessarily from skeletal reasons, but rather the muscles and fascia were sore.
Ashke was also being an asshole. He was pissed and kicking or biting at both myself and Dr K. Dr K and I were both commenting on his behavior, because it wasn’t like him and neither of us believed it was being driven by pain, since the things Dr K was finding were not enough to warrant his over the top reaction to EVERYTHING. Dr K related it to a four year old tantrum, which made no sense.
I finally asked him “what is going on with you? Why are you so angry?”
He sent a very clear image of me standing with Sal’s nose against my neck, he nuzzling me in a bizarre sort of horse erotica, laced through with bright green envy and raging anger. He was so jealous. I didn’t burst into laughter, since one should not laugh at open and honest communication.
I said, “seriously? Are you really that jealous that I helped? Is that why you are being so angry?”
The wave of angry jealous energy that washed out of him could be felt by both of us.
“Oh my love. You have no reason to be jealous. They went first because JJ had plans later. I helped because Sal had never had chiro before and he is blind in one eye. There is no one else for me but you.”
Dr K added that Ashke was her favorite Arabian, ever.  We could feel the tension and anger just drain from him (which made adjusting him so much easier) like water from a broken bladder. He was back to his friendly, teasing behavior and was able to help Dr K get his right hip and back adjusted into place. SMH at my funny, green eyed boy. I need to remember to not share his apples or carrots with horses that are also allowed to snuggle me.
Home front:
T finished his first semester of school with two A’s, a B and an F. The F was a decision on our part to toss in the towel on the college algebra class the day after the deadline past to drop the class. He is signed up for the same class with a different instructor next semester and he will probably need some additional support from me to fully and completely learn algebra. If that means I need to review his homework and keep him on task for this particular topic, that’s what I am willing to do. He is also taking Intro to Space, which may be the best title of a class, ever!! We are proud of him for stepping up and doing so well his first semester.
We also had another cat dumped in our area in the past two weeks. The poor thing was thin and scared when I first saw it, so we put out crunchy food and water for him. We can’t bring him inside, but I saw a pretty cool vid on FB on an outside cat shelter, so J created one of those. 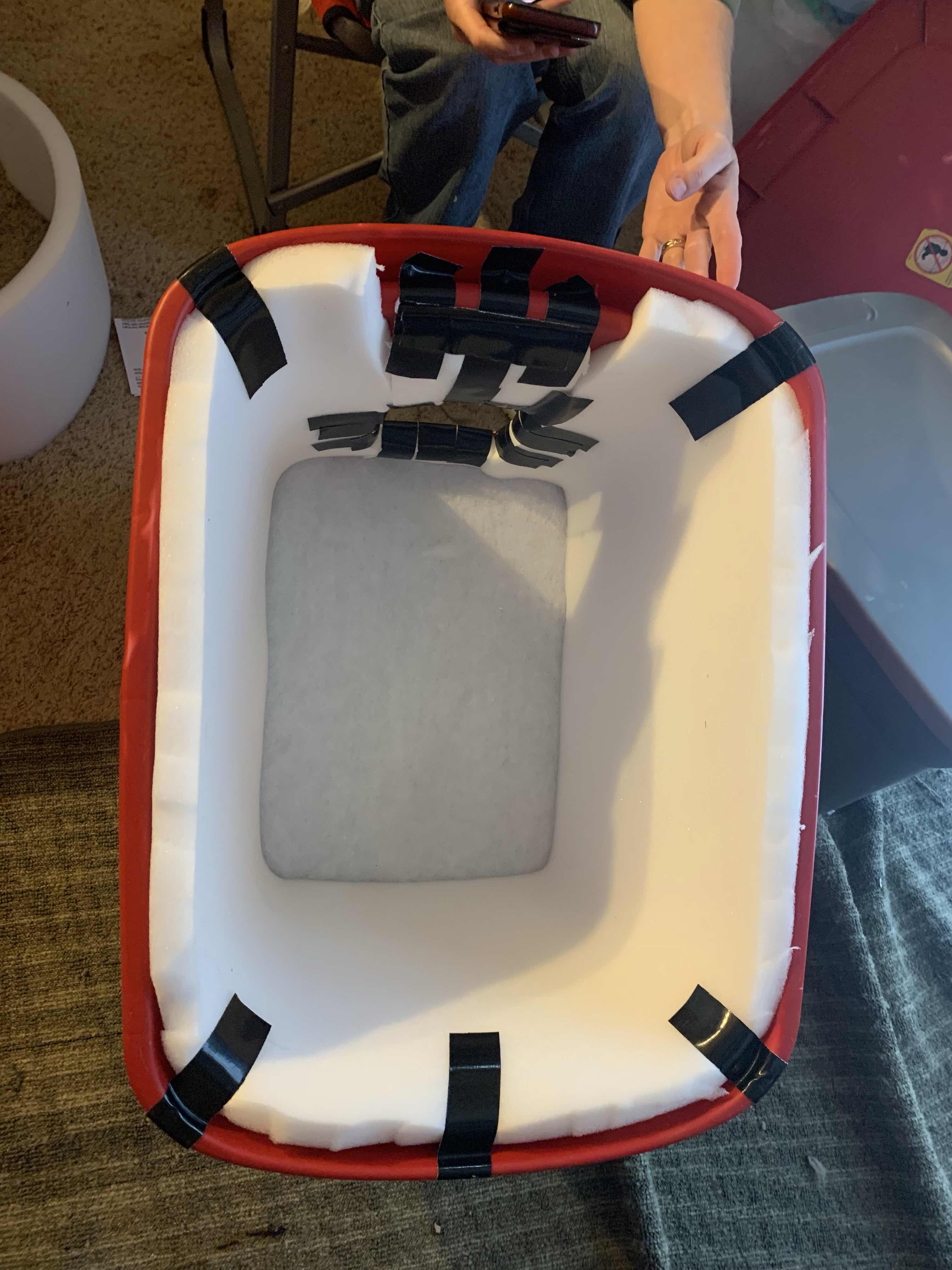 Outside Rubbermaid tub lined with insulation 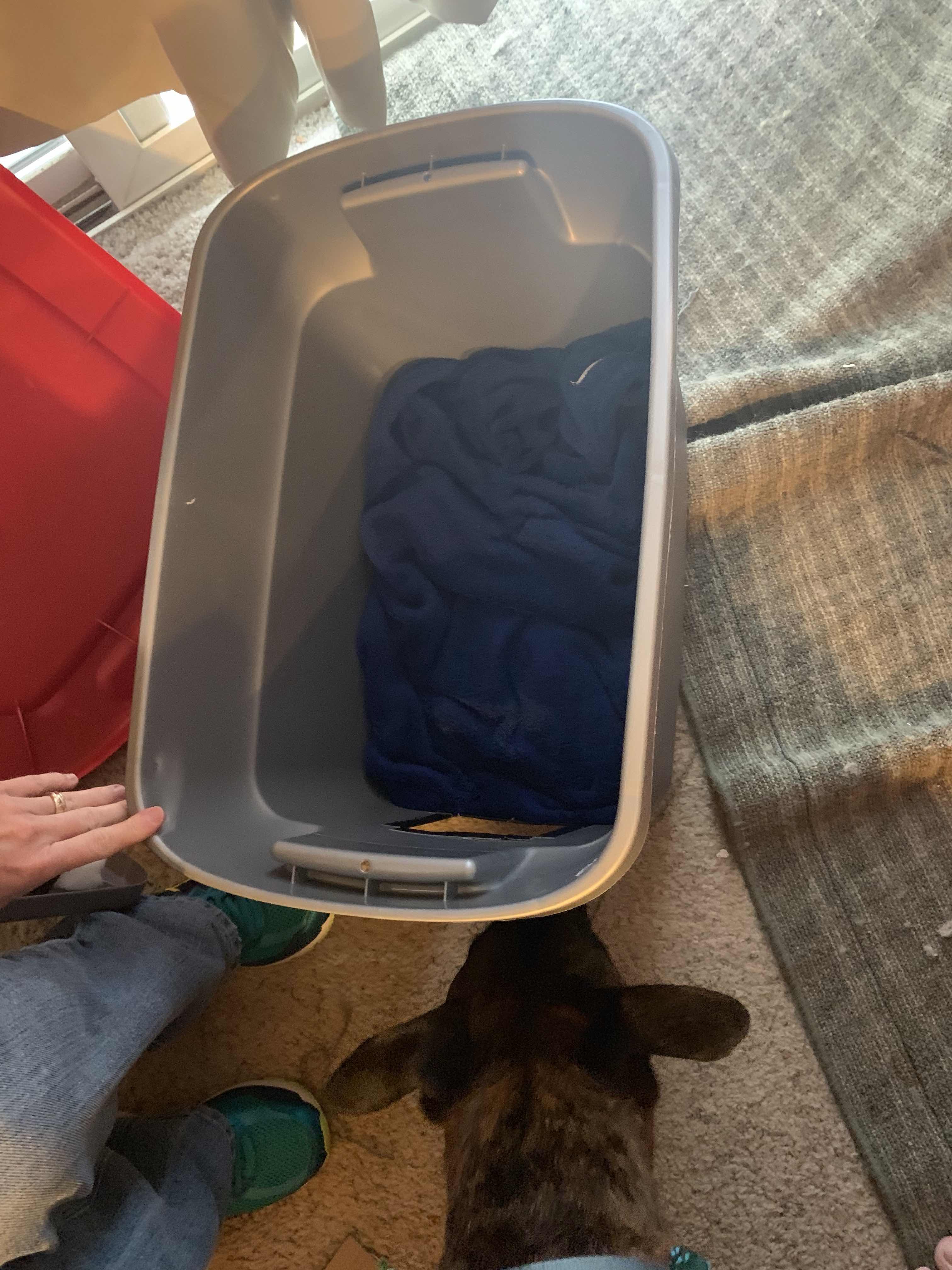 Inside tub lined with warm fleece 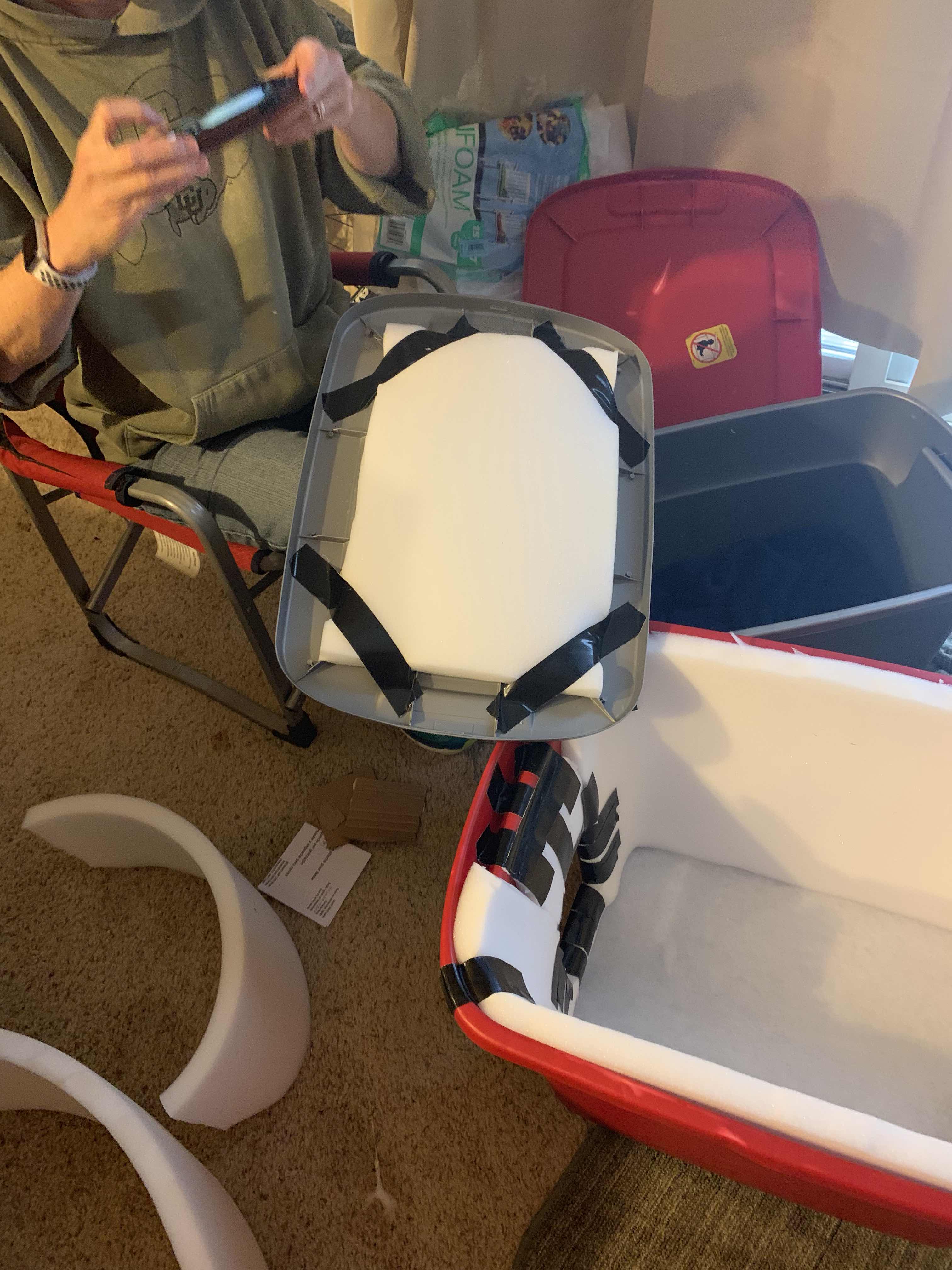 Insulated lid for inside tub 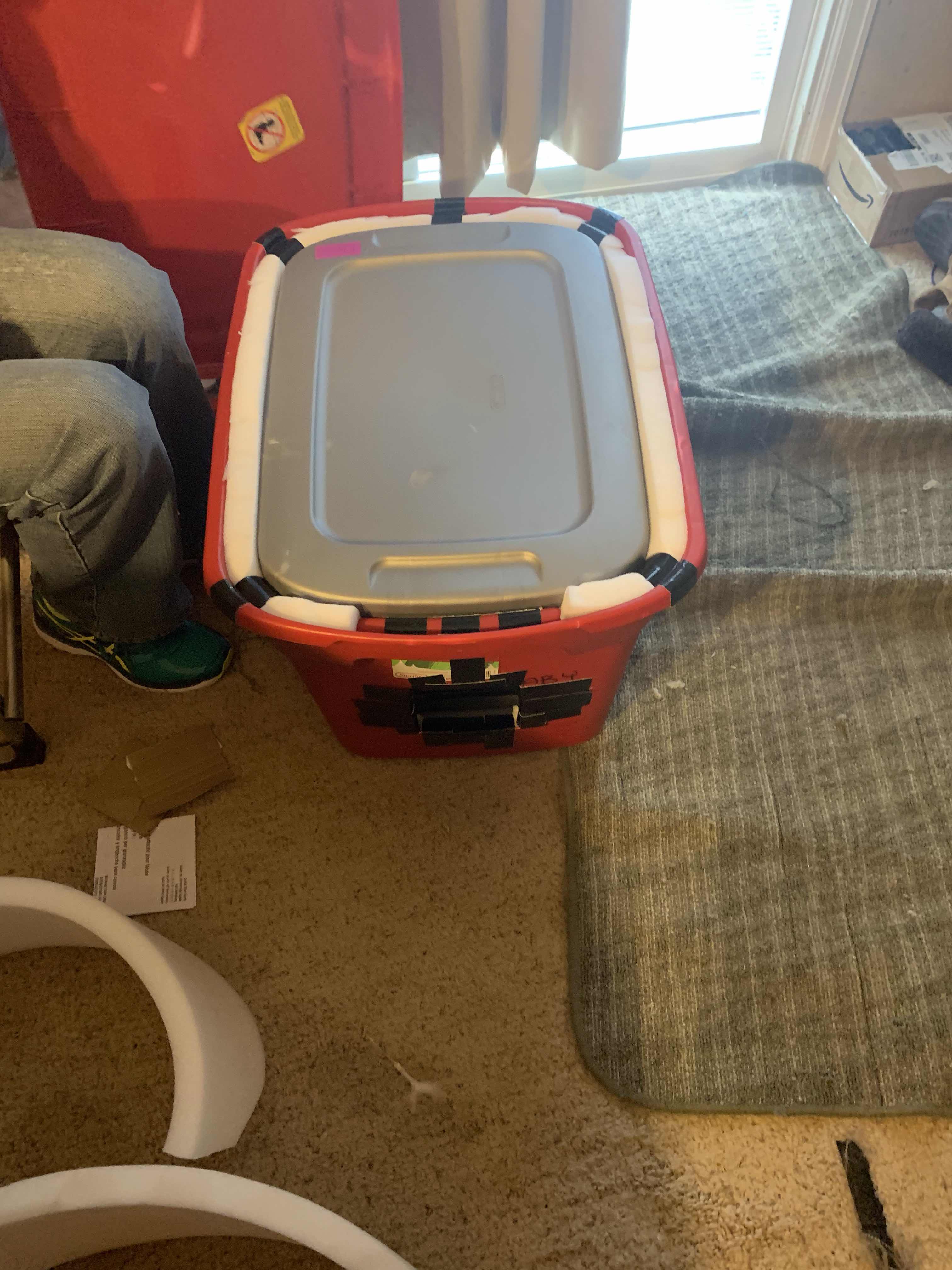 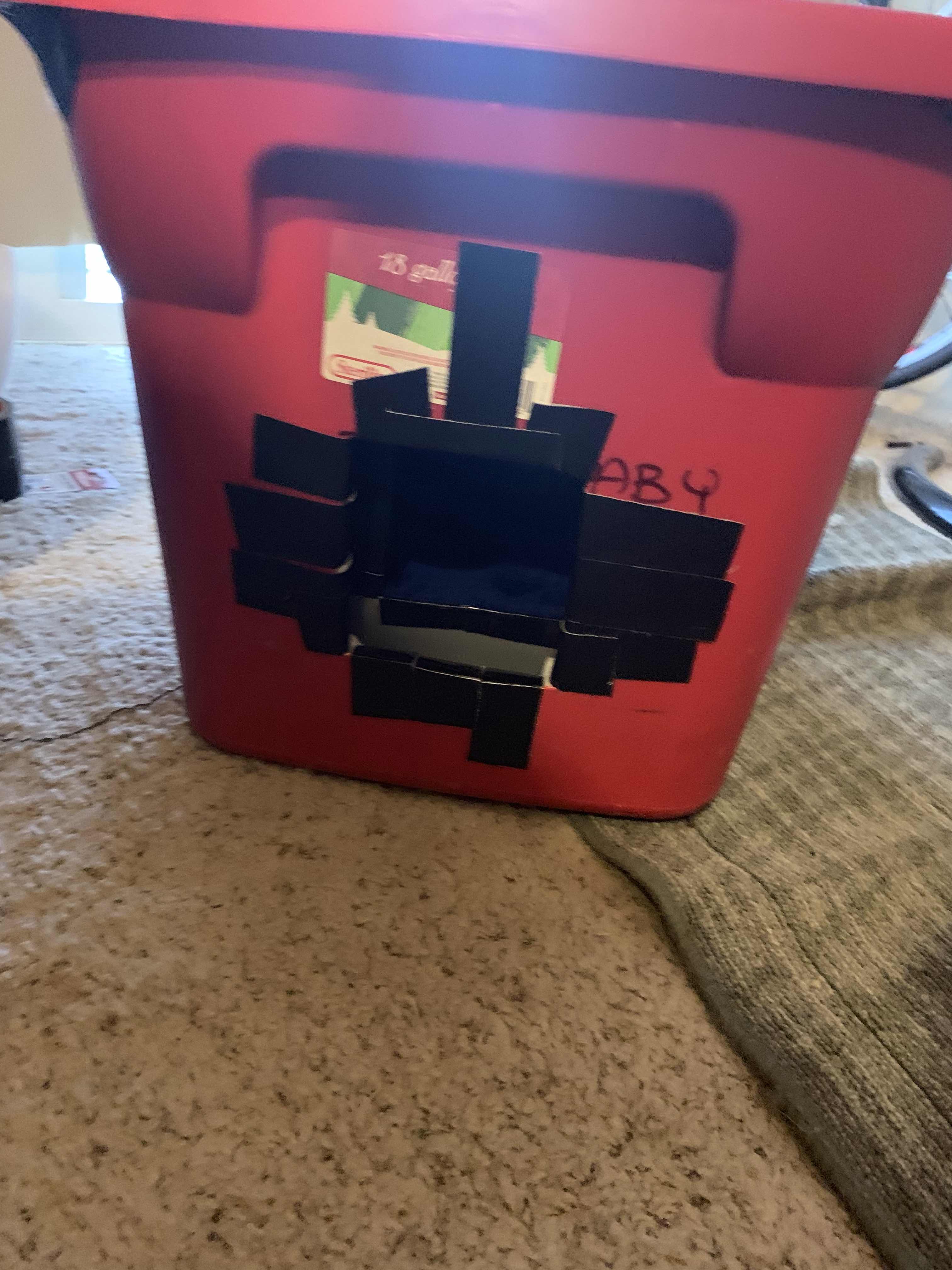 Opening in both the inside and outside tub, to allow the cat to reach the fleece inside.

The shelter is from Alley Cat and was pretty inexpensive, since J found the tubs at Arc.
I guess that’s it for now. Will try to get some vid of the canter half-pass to flying change we are working on.