Last night was another informal WE Ease of Handling Phase group. It was just Caroline and myself. We set up the corridor with a zig zag corridor so the horse would have to negotiate a backing turn in each direction, the slalom poles, the two barrels, a jump and the gate. The corridor was a challenge for both horses, and we worked that several times. The gate both horses have, so we worked it backwards a couple of times, just for fun. Working the gate backwards means backing in a half circle. Ashke was very confused at first, so it was good for him to actually have to listen rather than think he has it all figured out. The slalom was good. We rode through that several times, working on getting a bit of bend and rhythm through the poles. C and I spent some time talking about symmetry and shaping our circles around the slalom poles. Neither of us is particularly good at geometry. Ashke had some very good moments, and he was on the bit and listening well during our practice. The myler bit is making a huge difference in how he responds. We trotted the jump a couple of times and then put together a course to run through.

C struggled on the zig zag corridor. It may have been a bit much for her, but we figure we are just training, so there should be some things challenging us. The rest of the course was awesome. She has a great Connamara mare and that pony is so darn cute!! I worked the Ease of Handling at a trot, which Ashke did great on and we even had a good jump, where I wasn't jumped out of the saddle. We then ran it at speed and Ashke had three flying changes in the slalom before breaking to a trot, but he picked up the canter again immediately. We changed the corridor to a straight backing line for the speed round, which he executed well, then we flew around to take the jump at a canter, which C said he jumped perfectly (and I didn't look like an idiot) with his knees up and good form. The final two barrels he almost caught the flying change, but didn't switch in the back. However, he ran the entire course without a misstep or feeling like he was holding back. No feet issues. No hip issues.

It was a great ride and a lot of fun. I really hope more people come to join us, but I guess we will wait and see.

I've purchased two new products in the past month. The first was: 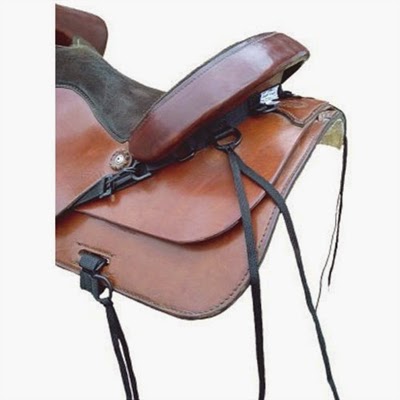 Cashel Western Tie One On Set

This is a web and plastic set to add tie on straps to your saddle. There are two parts to the set. The first is the part that attaches behind the cantle. It has several points to tie to and straps under the saddle to either the billet straps or the cinch ring, depending on the type of saddle you have. There is a second part that is intended to tie onto the place on a western saddle that the rear cinch goes through. I wanted to try this because my Alta Esquela does not have any attachment points in the back and I have been struggling with my Stowaway cantle bag. 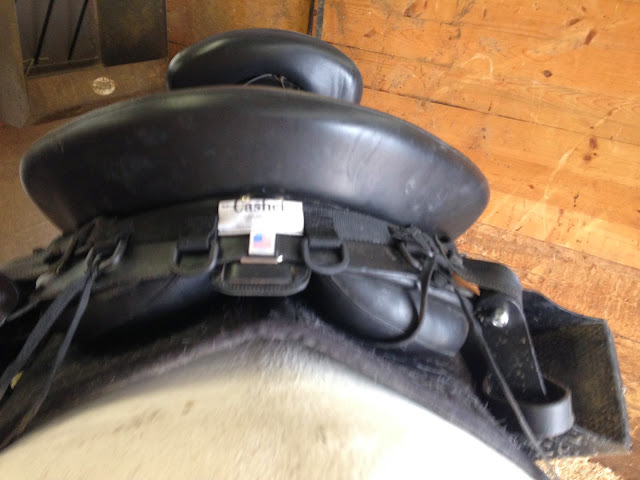 How it looks on the back of the saddle. 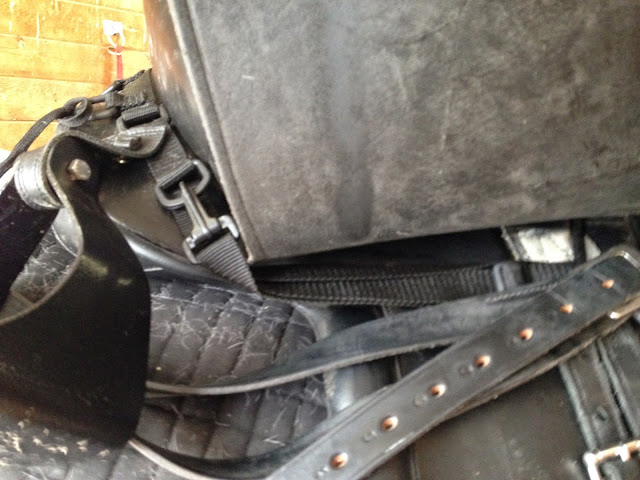 How I have it attached under the saddle flap 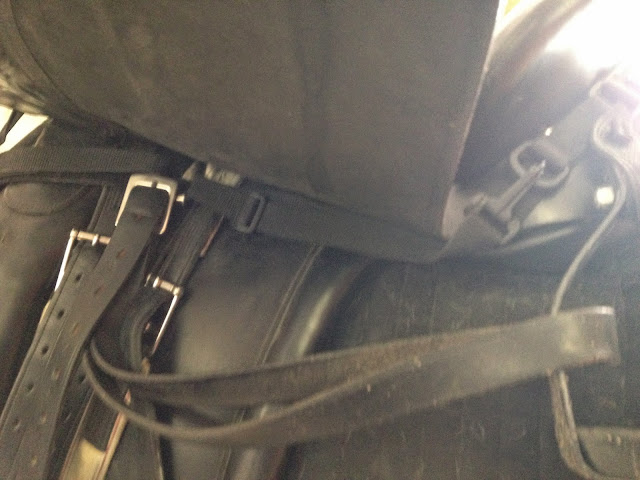 And on the other side of the saddle.

The issue I have been dealing with is the Stowaway cantle bag sags down and kind of rolls under both the saddle pad and the back of the saddle when we are in motion. Ashke hasn't complained of a sore back, but I wanted to address any issues prior to that developing. I tried this set so I could ensure the Stowaway pack stayed up on the cantle and didn't hang down. The back piece was fairly easy to install and I secured it to the stirrup bar (a solid metal square piece under the stirrup flap). I was then able to use it to hold my cantle pack up off of Ashke's back. The two pieces that were included for the rear cinch points on a western saddle, I cobbled together and attached to the saddle at the pommel. This allowed me to use the attachment points on the Tie One On instead of the broken latigos that came with the saddle. 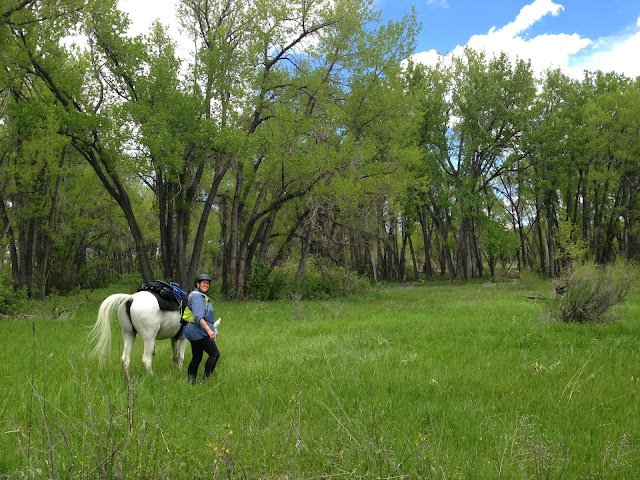 You can see the Stowaway Cantle pack up off Ashke's back. I carried a raincoat, my lunch and eventually his boots in the pack without it bouncing or bothering him. 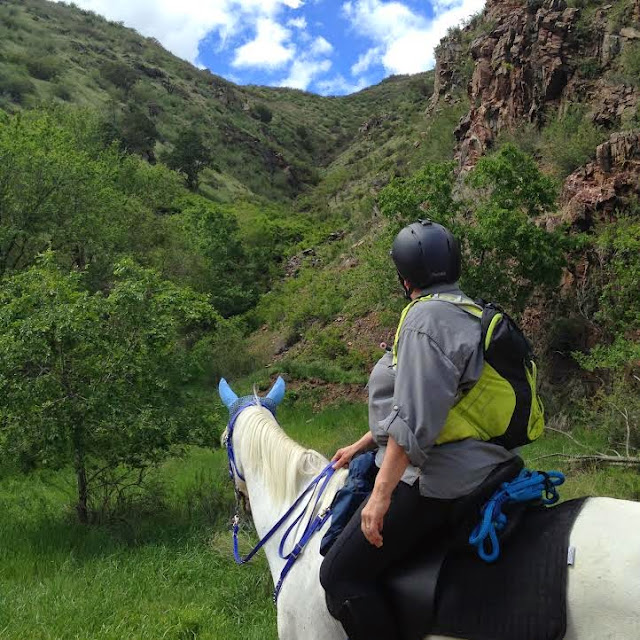 On Sunday, I packed less of a lunch and just tied his halter and lead rope to the back.
I had my rain jacket tied to the front.


I have exceedingly pleased with this purchase. It is functional and effective. At $25 and free shipping from Amazon, I couldn't be more pleased. My only complaint is the tie on lashes they provide are shoelaces, which I am less pleased with. I tried them this weekend and think replacing them with parachute cord will be more effective. Overall, I am very happy with the versatility this provides us.

The second product I purchased was a Back on Track Western Saddle pad. This was genius. As you can see in the above photo, it provides enough length behind the saddle that I don't need to worry about the cantle pack bunching up underneath the pad. The western pad is as thin as a dressage pad, with the wither relief form. It is intended to be used beneath a regular Western Pad, so using it solo under my Alta was exceptionally effective. It just covers the area on the side where the saddle sits and doesn't bunch up between the saddle and my girth (I have short billets on my Alta, since I am impatient and have to use a jumping girth). I feel completely confident that if I were to add extra saddlebags or gear storage options on the back of the saddle, they would not scuff or rub due to the length of the BoT Western pad. If we ever decide to ride for more than a day, this will be optimal for packing extra stuff on behind. (Like food, a hammock, sleeping bag, feed for Ashke, brushes, water containers, tarp, etc. J will need panniers on her bike to carry her stuff or we are going to need to find a mule, since my goal is to do a three day ride along some of the Colorado Trail after T is in college. Anyone want to join me?)

The BoT pad is as good as the rest of their products and works well with my Alta. My only wish is that there were blanket loops at the withers like the AP pad has so I could secure it to the billet straps so it wouldn't slip. I haven't had any issues with it yet, but may add the straps myself, just to be safe.
Posted by Cricket at 9:34 AM