There is a young woman who rides a beautiful horse western style. She wears spurs and has the heaviest hands I have ever seen. She is trying to teach her horse to slide stop through the time-honored method of spurring her forward, then hauling back on her horse's mouth. That poor horse can't get her head down enough to do a balanced slide stop. 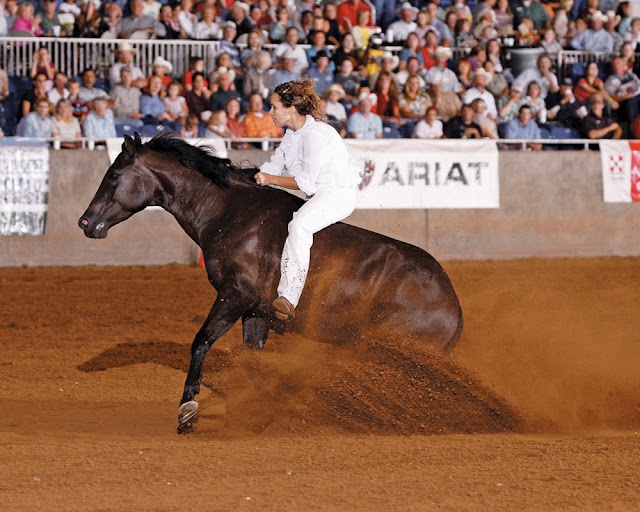 Stacy Westfall (from the web)

Instead, this poor horse is almost throwing itself over backwards to get away from the bit. And it doesn't want to move forward again, because it's just going to be yanked on once it's moving. I can't ride when this woman rides. It's brutally horrible. She was riding in the outdoor arena when I got to the barn.

So, I rode last night. In the indoor. Just the two of us.

We worked on stopping with a breath. We started at the walk, then the trot and finally at the canter. We were able to do the halt transition without me touching the reins at all. At the canter I didn't worry if it took Ashke three or four steps to stop, since I am trusting him to slow himself without injuring himself. I was much more focused on our communication than on his reactivity.

We worked on lateral work at the trot from the quarterline to the outside rail, and he gave me some really nice try. Then, I was going to ride through some of the dressage test for Novice, but I still don't have it memorized, so we worked on rhythm and balance at the three gaits. He lifted himself nicely into the canter, but once when I asked him for more bend to the left, he immediately tried, I felt his body change, and on the second step he cross cantered. It was too much for his right hind. And I'm not sure he wasn't having some issue with his left stifle as well. Which may or may not have contributed to our fall on Sunday. We stopped and I asked him to canter again, this time letting him handle himself the way he could.

I've discovered that he counter bends with his neck on the left lead. On the right he travels like he is moving with his haunches in. It feels much different than moving in the other direction. It is also much more difficult to move with him to the right. He is able to slow himself a lot to the left, but to the right he rushes more, probably to keep his balance and momentum. It is better than it was when the winter started, but not as much better as I was hoping it would be. We just need to continue working on it and try to keep himself from hurting himself again.

It did, however, make me question my goals once again.

Not what we are doing, so much, because my boy loves what we do. He loves playing with the obstacles. He loves doing the speed runs, in fact if so much gymkhana didn't involve sitting back on his haunches and then launching forward once again, I think he could kick ass at gymkhana. He's even doing the dressage that I am asking him to try with all of his heart. And he is incredibly happy out on the trail. He prefers new trails over old, but he is still happy and alert regardless of where we are riding.

And I do see progress. We can do ground poles without flailing. We can jump a small jump without dragging our hind end. We can ride for four hours and still be moving briskly down the trail. My back only hurts when we fall and hit the ground hard (yes, I was very sore). He is moving easier and lighter than I have ever seen and he feels great under saddle. We are growing as a team.

I had to stomp hard on the "we could be good enough to really pursue WE" monster that tries to poke it's head out every once in a while. The "we could be good enough to show at The Haras Cup" spectre that meeps out at me from the back cupboards of my brain. Maybe, if I continue to work five days a week and build on what he can do, we might some day be able to do that level of showing. I have a horse that has the heart for it, I just don't know if we have the body for it.

I kind of have to laugh to myself when I hear about other people wondering if they should move on from their horse when they've been working with them six months or a year. I'm three years into this journey and still working on a good balanced canter. Maybe in a year I will be able to get a good balanced canter with bend. Maybe, if we are lucky, he will be able to canter in a frame without hurting enough that he has to cross canter or throw his head up in the air and slam to a stop because of discomfort. I just have to be patient and wait. Keep moving us forward a bit at a time.

I read a great quote this week that struck home like an flaming arrow to my heart: