It was somewhat surreal on Saturday to realize a week ago I did a 14 mile ride up Waterton Canyon in my shirt sleeves. This Saturday was spent in a garage, in my bib overalls and Carhartt jacket, with a space heater, directing, and on occasion, actually helping craft Babe. My little "I'm going to ride all winter" happiness bubble is absolutely burst like a soap bubble in the cold. Little shattered pieces of ice bubble every where. Laying on the 7" of snow we woke up to.

J and I loaded up 1 MDF panel (4 x 8), 3 ten foot 4 x 4 pine boards, 3 ten foot 1 x 3 pine boards, and 1 ten foot .5 x 1 pine board, plus various pieces of hardware, our drill, drill bits and a hammer. It was especially fun loading all of that in the truck with the four bales of shavings already in there. Once it was tied down so the MDF panel could not kite away on us, we headed for a friend's house to use their garage for the day. The husband of the house, M, was like a kid in a candy store being able to work on a project. (He was so cute.) 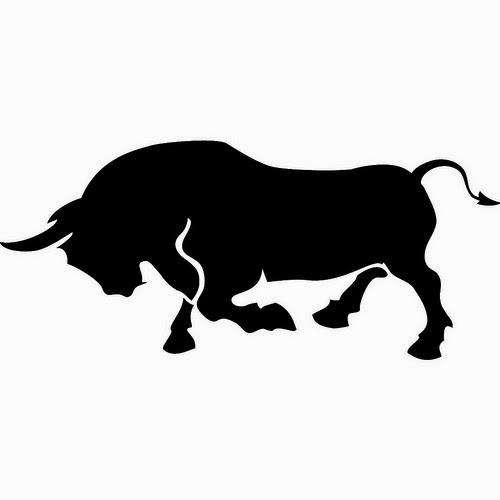 Babe from the interwebs.

J had drawn the picture I had picked off the internets onto the MDF board. My plan (which was sketched out onto a yellow pad) was to position the ball just above the horns, then have a pole with the ring a couple of feet above that, and finally, have the quintain at 7.5 feet from the ground. That way all three options are in a line on the right side of the bull. The MDF panel is 8' long, so we needed to support both ends, while making it sturdy enough to survive a galloping lance hitting the quintain. We also had to make it possible to be moved by one person. 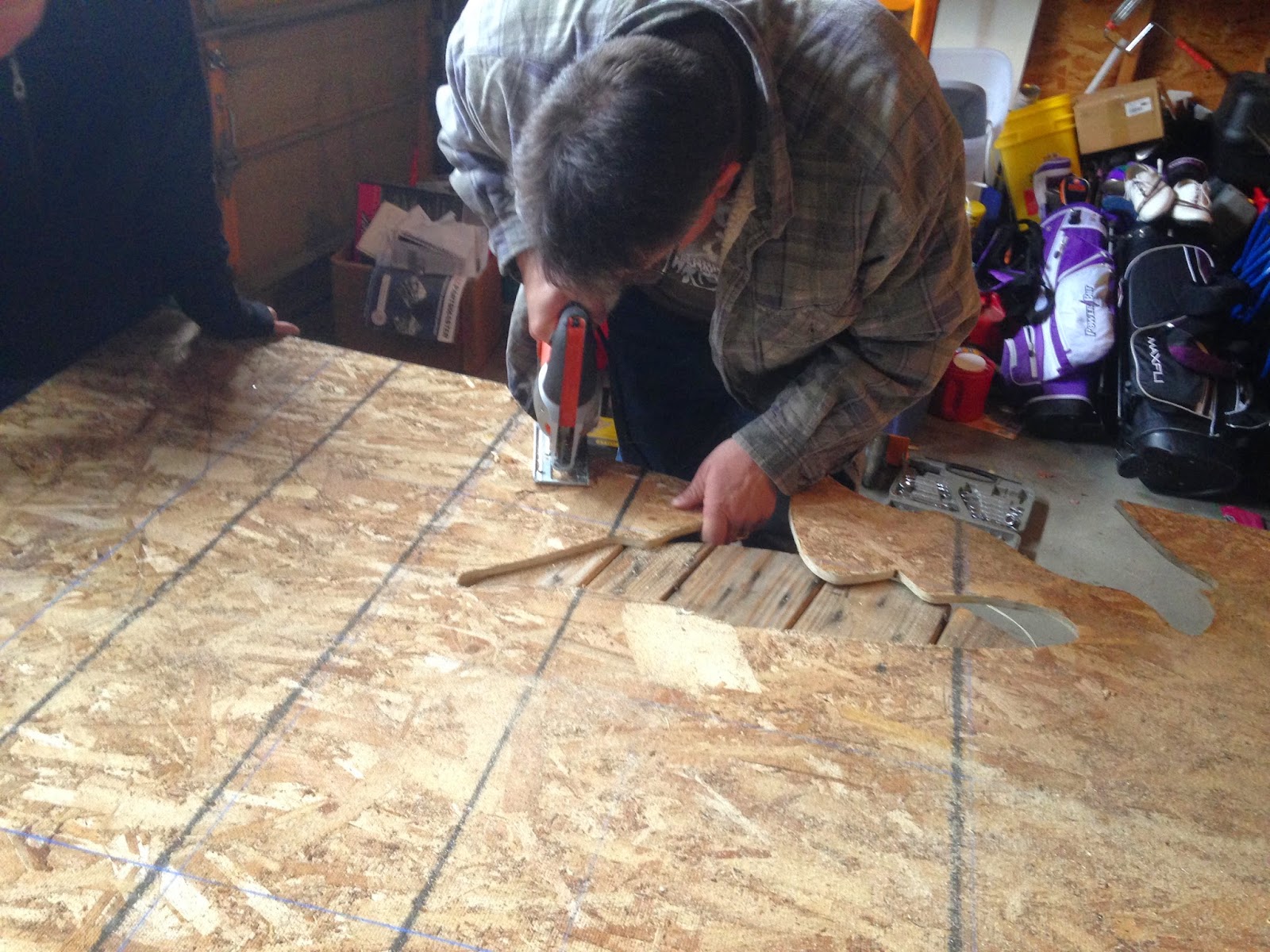 Making the first cuts on the bull.

M did all of the jigsaw work, while J and I held the wood. He did a great job with the jigsaw. 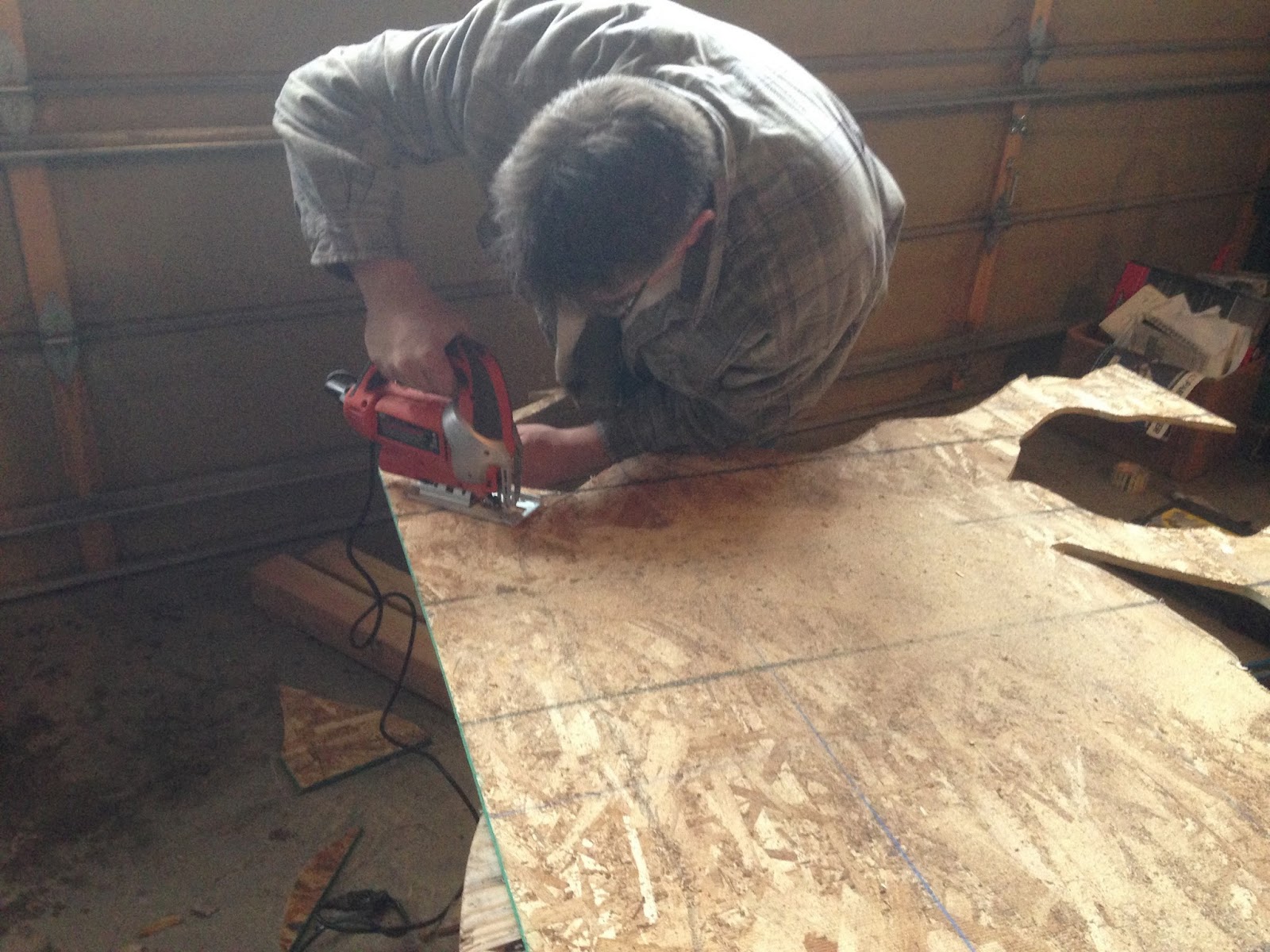 The hind end and a pointy tail. 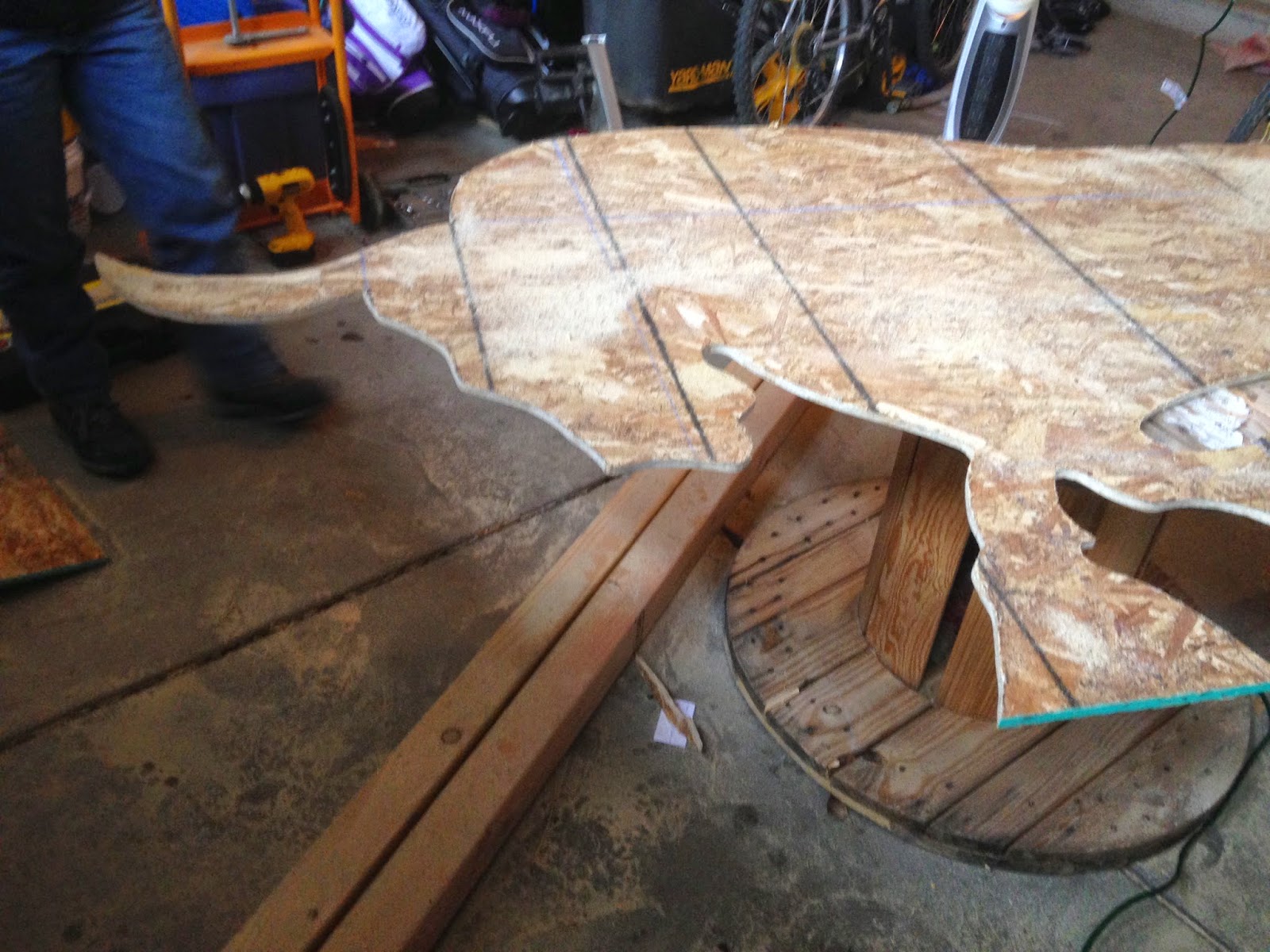 We changed the horns to curving upwards, to hold the ball just above them. 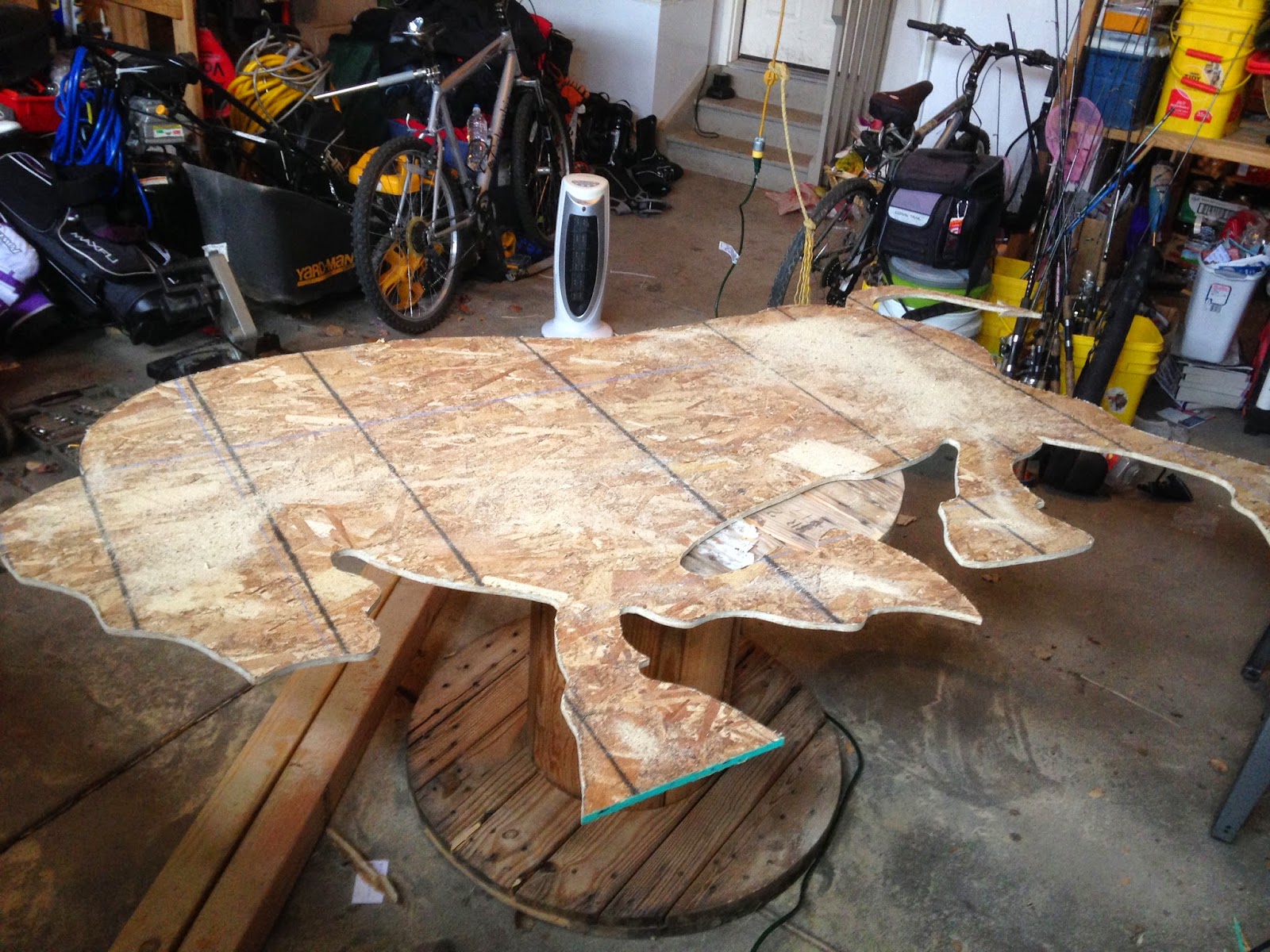 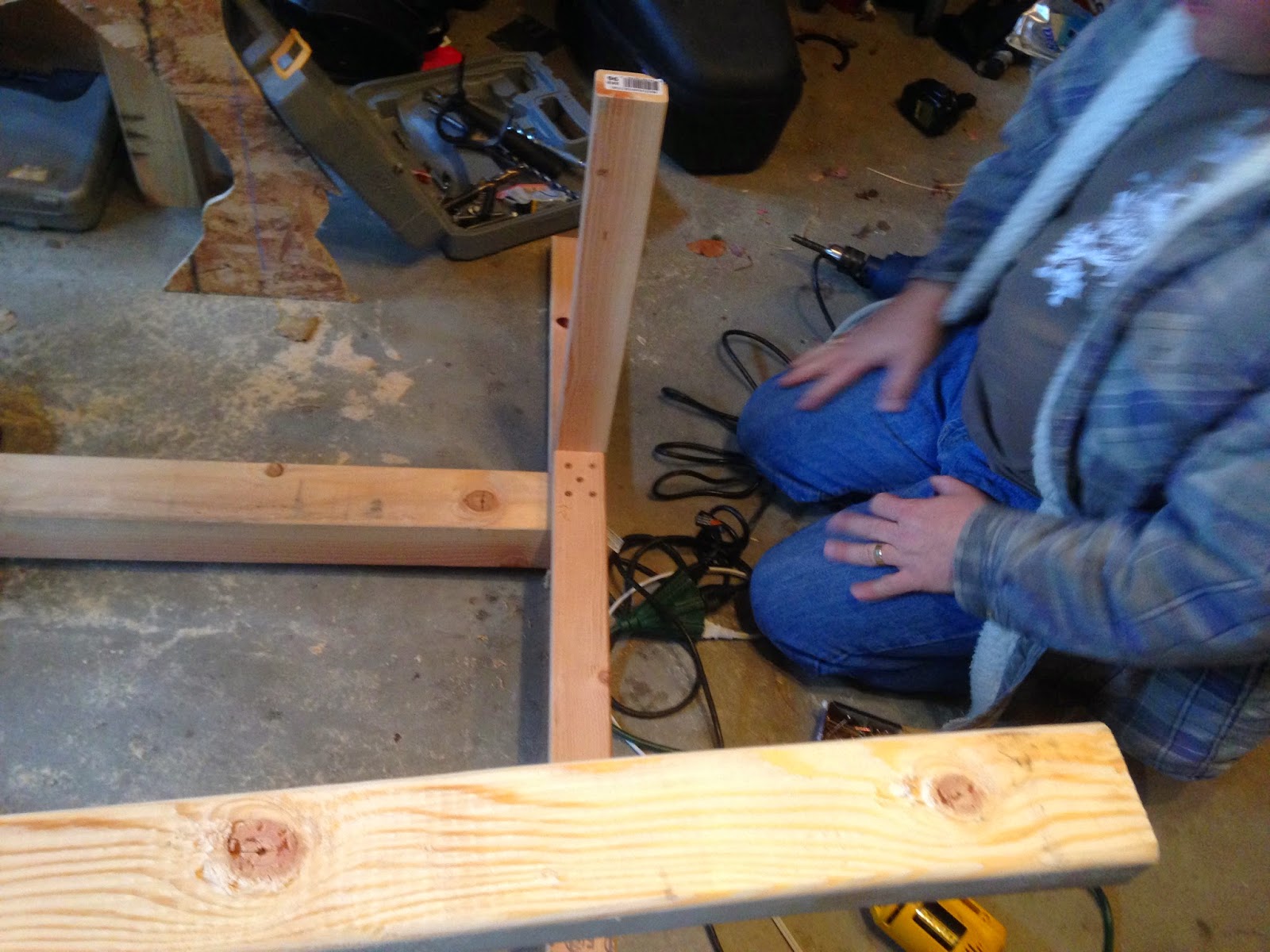 Building the stands for the bull to hang on 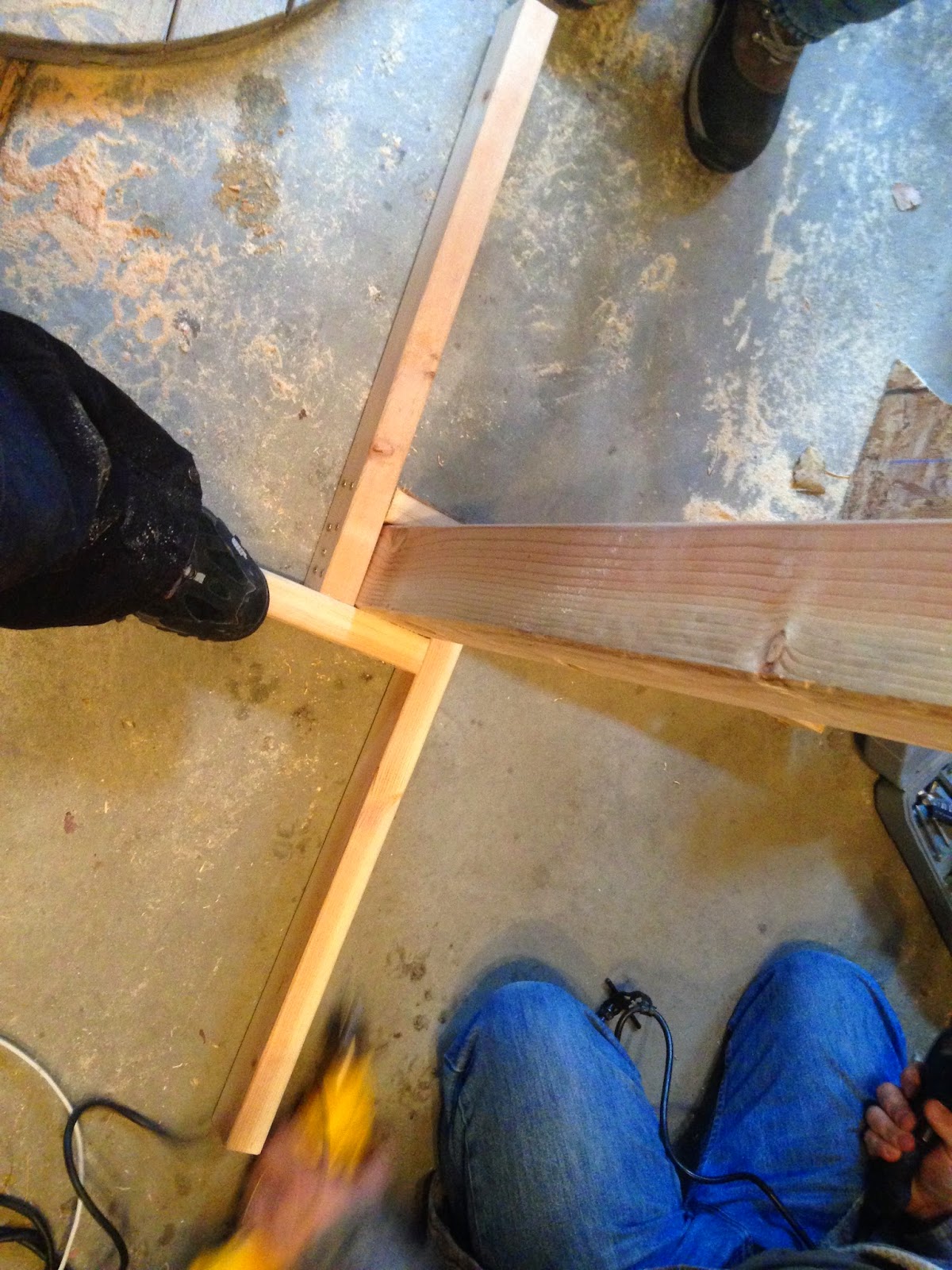 The tallest post is set right behind the bull's shoulder and we used 24" legs for that post to give it enough stability. 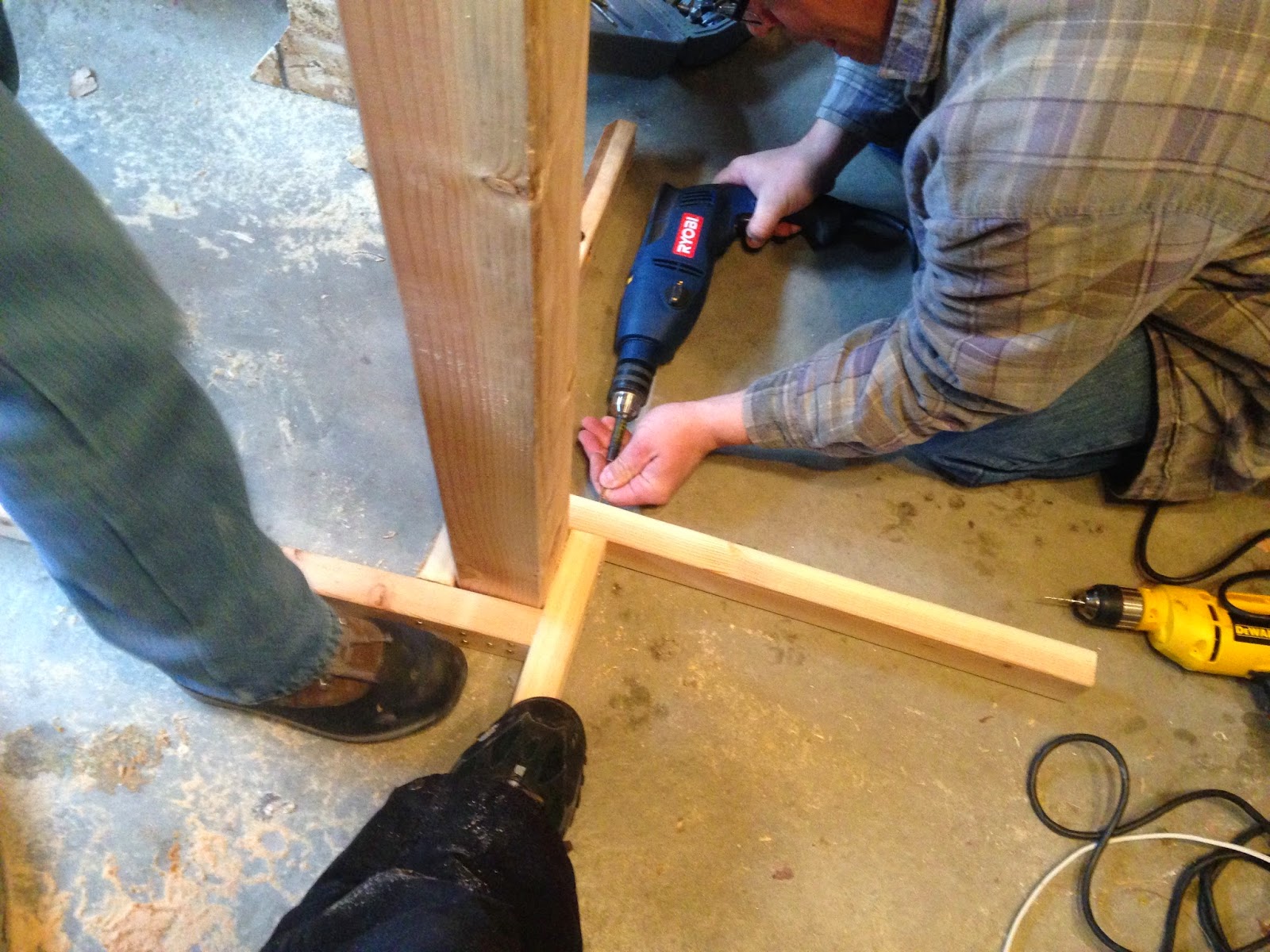 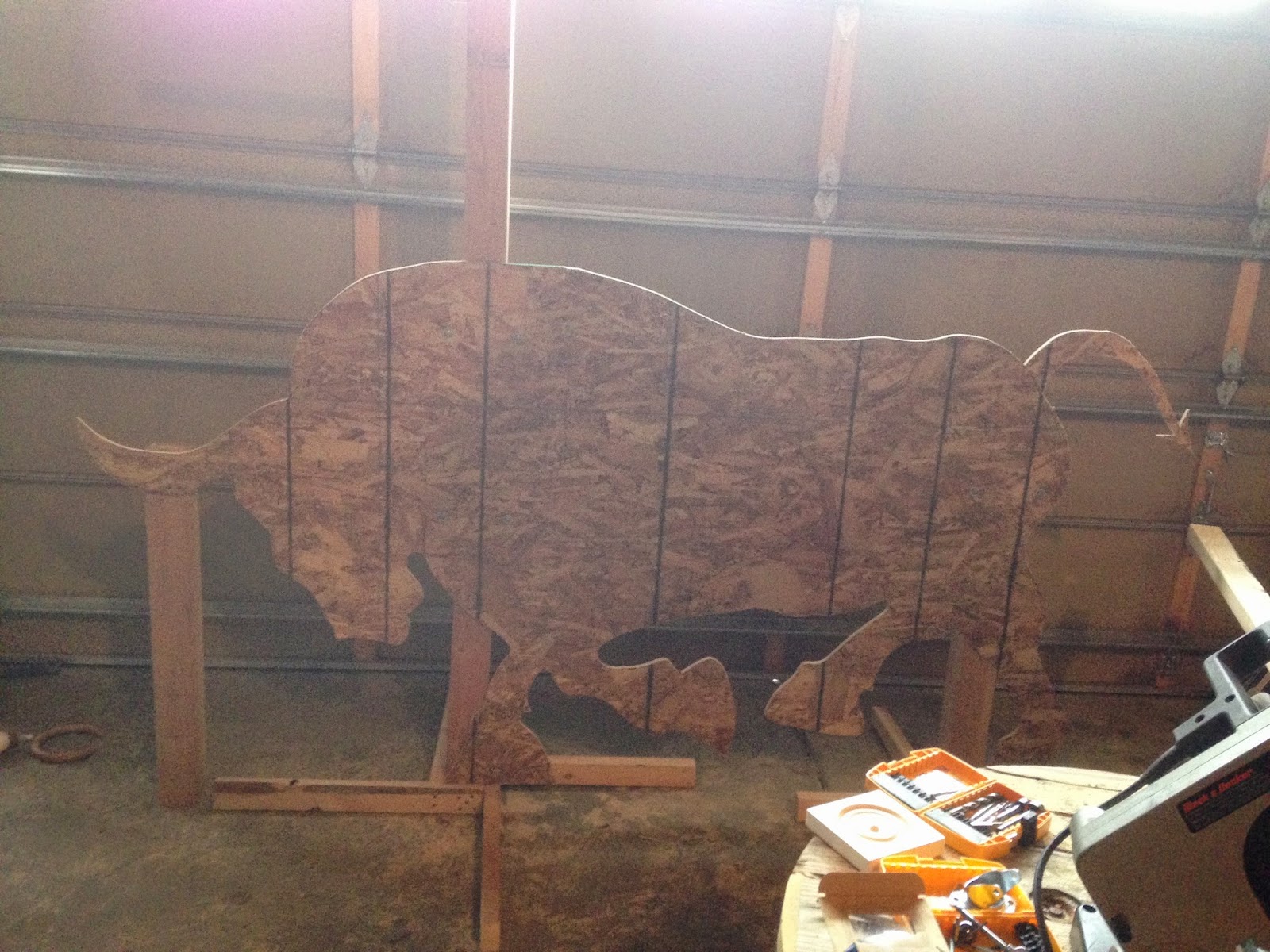 The big parts are put together.


The post on the far left is the structure to hold the ball. I have a plastic bowl I will attach to the top of the post after painting the structure. The post above the shoulder is for the ring and the quintain. We used deck strapping which was attached to the 4x4 post and then drilled holes through the MDF panel. We attached the bull to the posts with carriage bolts and wing nuts, to facilitate ease of movement. We can take the bull off of the posts and move them all separately, other wise it will be both heavy and bulky. 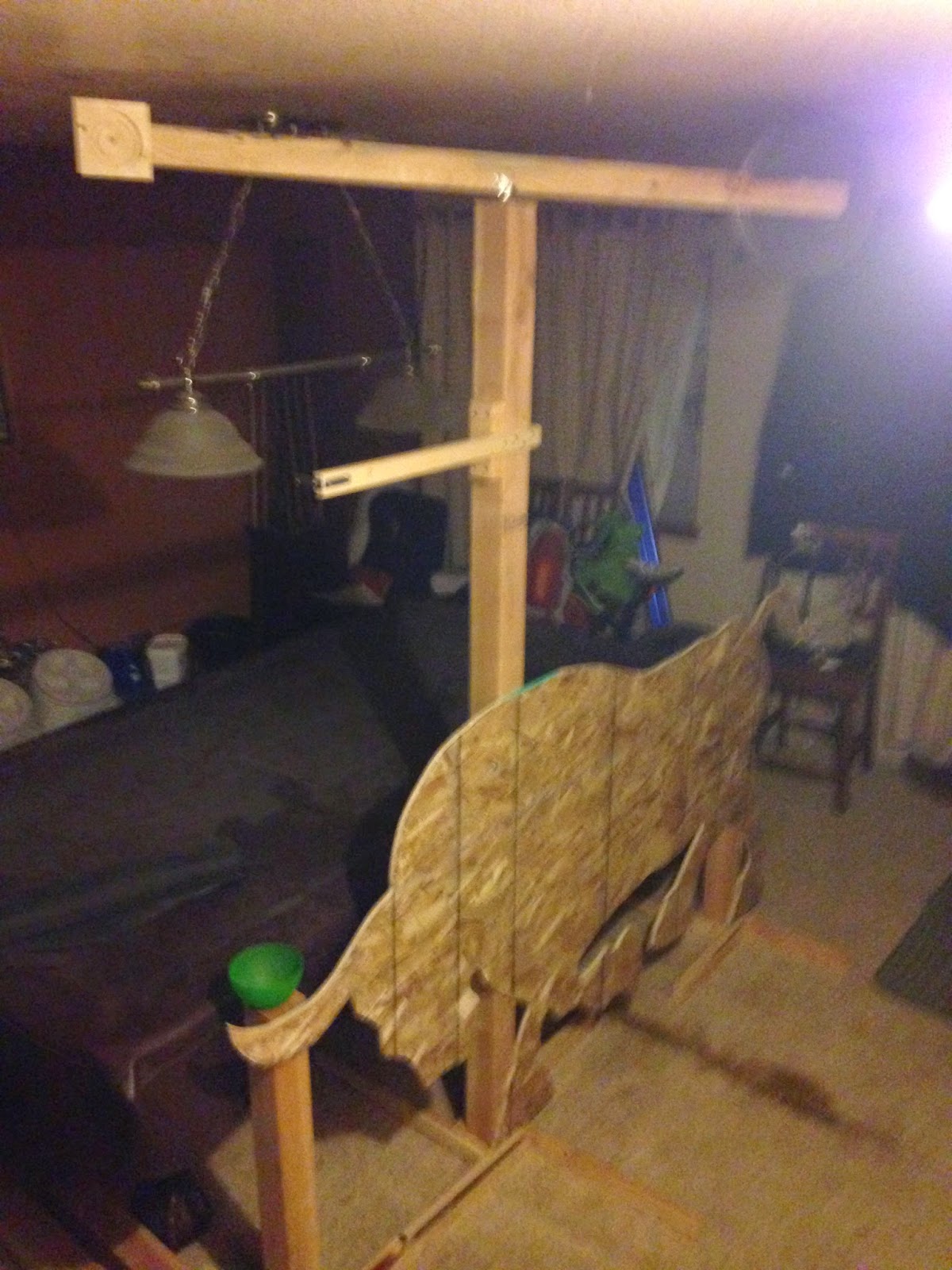 Back home in the basement awaiting paint.

We are still needing two brackets to attach the front pole to the horn, and the bottom of the back post to the lower back leg. The green bowl in sitting in place, but I think we need to jigsaw it so it's more shallow than that (it will hold the ball better) and then attach it. We need to purchase rings (I'm thinking Babies R Us) to hang on the L-bracket attached to the wood. When standing in front of the bull and approaching on the right side, all three targets are pretty much lined up, but have enough distance between them to be able to safe negotiate all three options.

Once we had the parts done that we could finish in the garage, we loaded up the bull and stands. (Thanks M for all of your hard work and input. Thanks A for the pizza at lunch time, since we were about to expire.) Then we went to the hardware store to get a garoucha pole (they were all warped) and the last of the brackets. They didn't have the brackets we needed, so we will have to try the more female friendly store. 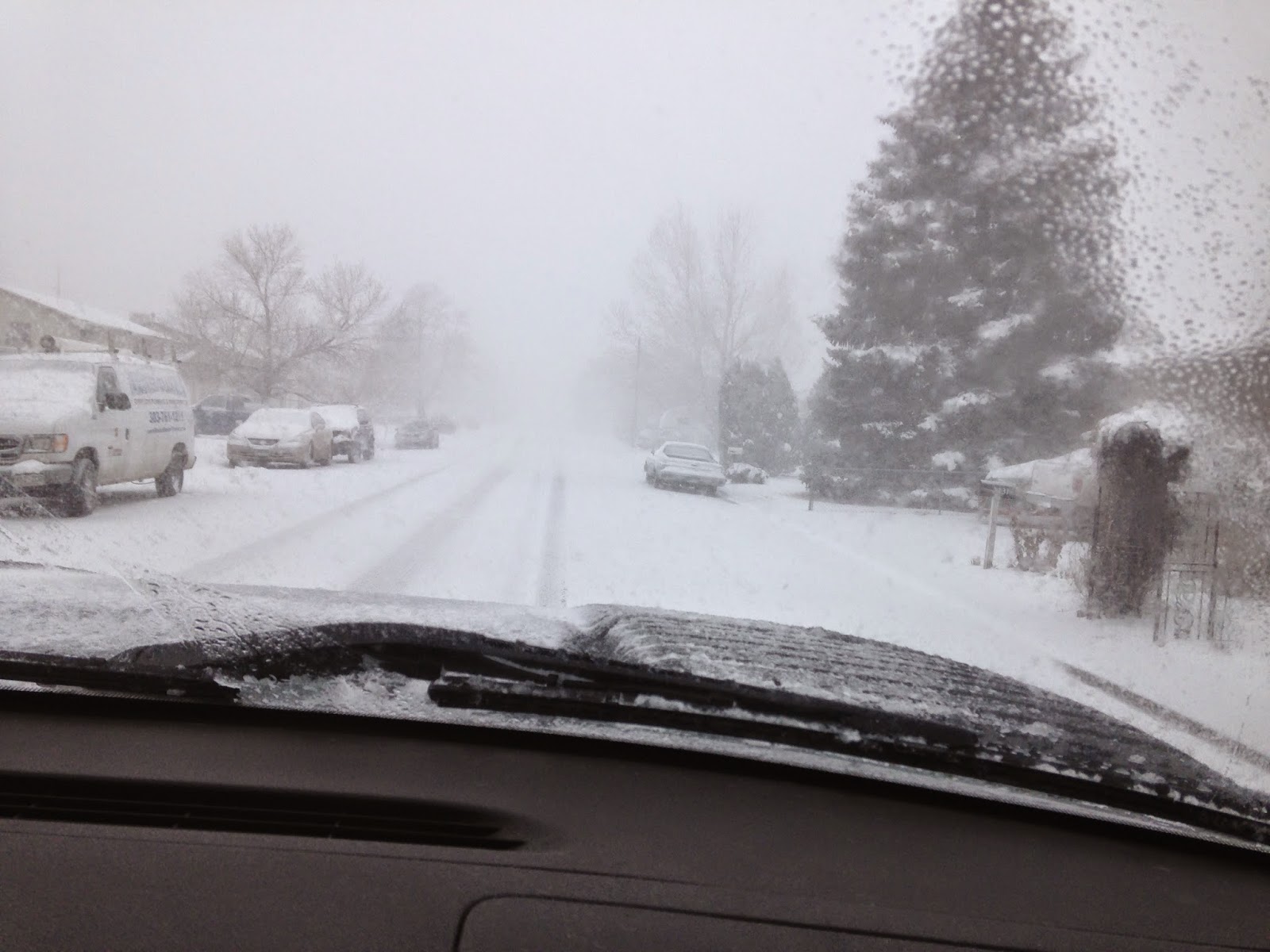 The weather this weekend was two fold. We had a storm come in on Friday night and dump any where from a skiff of snow in some places and up to 10" in others. We got about 7" at the house and about 5" at the barn. It got a bit warm and the roads were running with slush and water. Then the second storm came in and the temps dropped in fifteen minutes. Everything that was wet was suddenly frozen and the visibility dropped to 50'. The snow was coming in sideways. We would have stayed home, but we had to drive out and check on Ashke, plus picking up the boy from his day of skiing.

The drive out was bad but the drive home was worse. We got to the barn about twenty minutes later than would have been normal. Ashke was in his mid-weight blanket, but had obviously been out in the snow since there was two inches of snow sitting on the top of the blanket. The blanket was wet and Ashke was too. He was wet from his head through his shoulder (the mid-weight blanket doesn't fit as well through the shoulder) and I was afraid the mid-weight would not be warm enough with the cold snap that we were expecting. I swapped it out with the heavy-weight blanket, which fits much better. J and I unloaded the shavings and picked out his stall. Then we went to get T. He was thirty minutes late. In that hour, the traffic situation became completely crap. It took us two hours to make a twenty minute drive. Thankfully, we were in the truck.

We woke up Sunday morning to about eight more inches of snow. Every thing under that snow is icy and very slick. Instead of doing something fun, I cleaned the house. Then J and I braved the roads and the snow to go out and feed Ashke. He was warm and dry. It was obvious he had spent the night inside, since there were several piles in his stall (he almost always goes outside to poop) and the shavings were very wet. I cleaned out the mess and we gave him another bale of shavings. It's supposed to be close to zero tonight and I wanted him comfortable.

Tomorrow, we ride and I get to play with my garoucha pole. T, lucky dog, gets to sleep in.
Posted by Cricket at 10:04 PM