I was so excited and nervous about the WE clinic today that I could barely stand myself. J and I worked like a well oiled machine getting the shavings for the trailer, hitching up, loading up and getting all the other parts that are a necessity when spending time away from the barn. Ashke loaded with the come-a-long, but I feel like it won't be too much longer before the trailer is as much of a non-issue as the wash stall. We had a pretty straight forward drive to the Salisbury Equestrian Park, except that the address in Mapquest dumped us in the middle of a subdivision, about five miles north of where we really wanted to be. I figured it out and got us back on track after cursing my phone and using google maps.

There was one other horse trailer there when we pulled up. Most of the other riders got there about fifteen minutes early, but I was pretty happy being there almost an hour early. Ashke looked around and was a little twitchy while I was grooming him, but overall he was a rock star! Once we had tack on, we headed to the arena. I walked him around and over all of the obstacles, letting him get a good look at everything. Then TJ, our awesome clinician, started the group out. Our first hour or so was spent practicing the eight obstacles that are going to be the course tomorrow for the schooling show. After our practice, we got to ride through it as if it was the class. 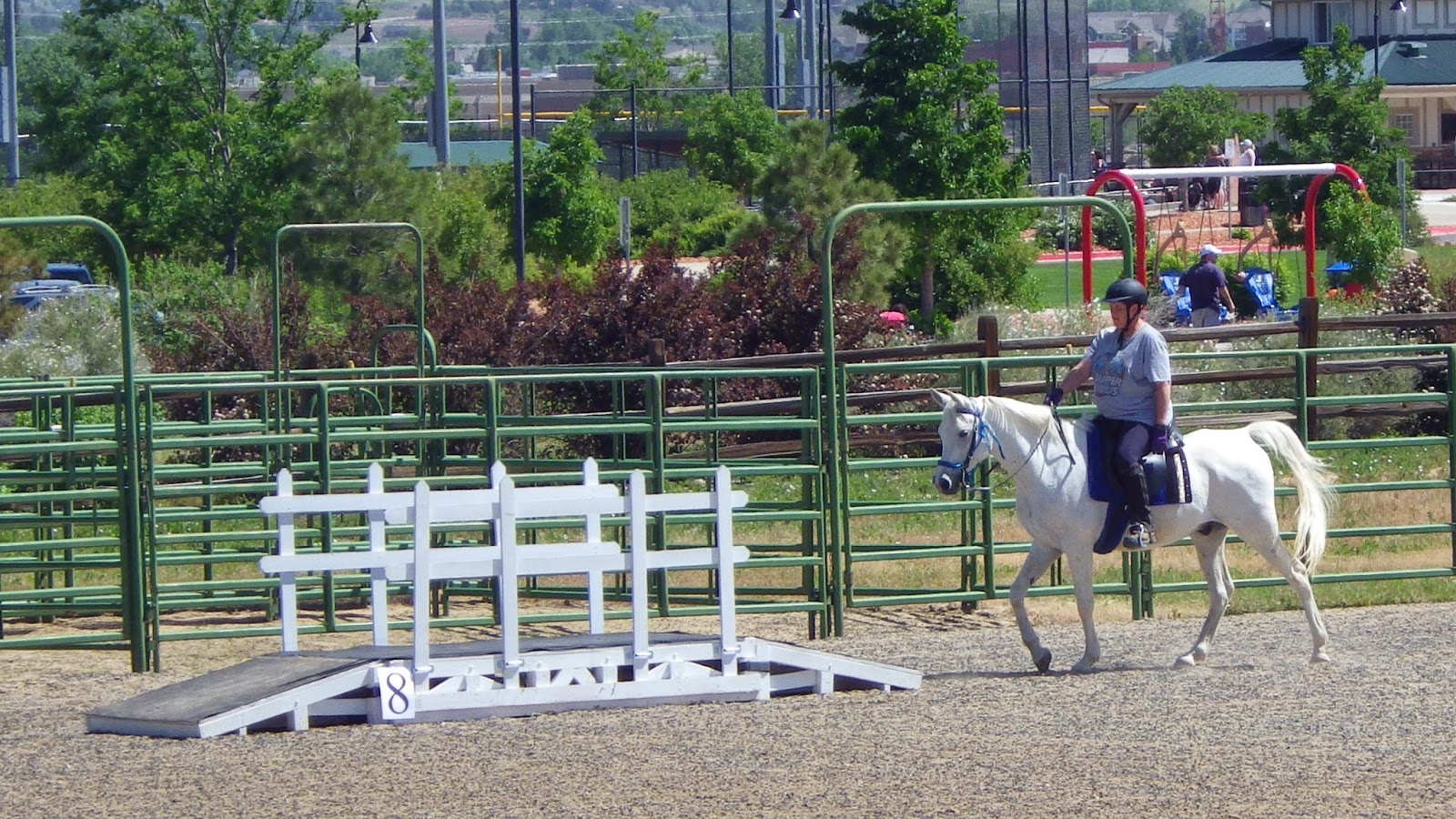 Ashke had SO much fun. 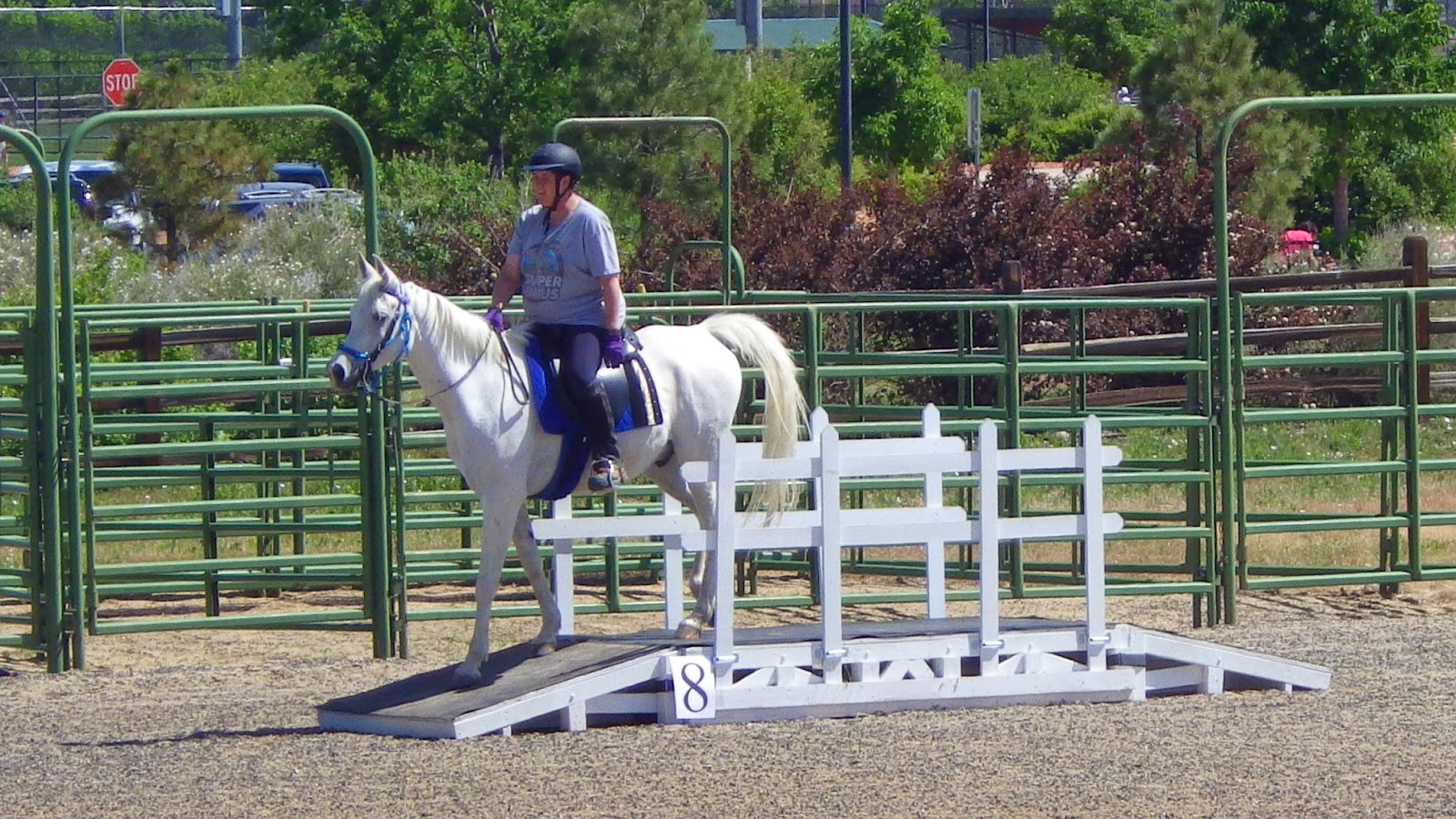 There really wasn't anything that upset or spooked him inside the arena.

(I had a hell of a time with the bit/no bit/bit situation. He was really not liking the shank Myler and was really refusing to bend or round during the obstacles. He wanted his head straight up in the air. I pulled the bit and tried the sidepull, but he wasn't any better that way. I ended up leaving the clinic to pull the D-ring Myler snaffle off of the other bridle - where it was being used as the bit on the bridle I am planning on using for the costume contest tomorrow - so I will have one more thing to fix on the costume between classes. The snaffle was much better for the most part. It will be what I ride in tomorrow.)

This was the ease of handling part of the practice. I would have lost points for little bend and no rounding. I plan on riding in the bit tomorrow and warm him up with some dressage, so we get some bending and collection before we ride into the arena.

After this run, I changed to the snaffle and asked him for some roundness. We did another couple of practice runs, one of them at speed. At the very end, I did one final run because Ashke had decided that the very first obstacle, which was a corridor with a bell and then a reinback, was simply a reinback. He was anticipating something awful, so I rode him through that obstacle a couple of times. J caught this one on tape.

The thing that stands out for me about this video, is the flying lead changes on the poles. Yes, go back and watch that part again, because my boy rocks!

I have one more video of our sidepassing during the practice session. TJ saw us and told me I couldn't do that, since it's a Level 2 or 3 obstacle. I asked if I could garner extra points for the attempt and she told me no. Then later on, after I switched the bit, she told me Ashke is a Level 2 horse. I need to pull the dressage test and begin working on the elements in it, in case we ever get the chance to ride in a full show.

I was so happy with Ashke and thought he did magnificent. We retired to the trailer and fed him mash. 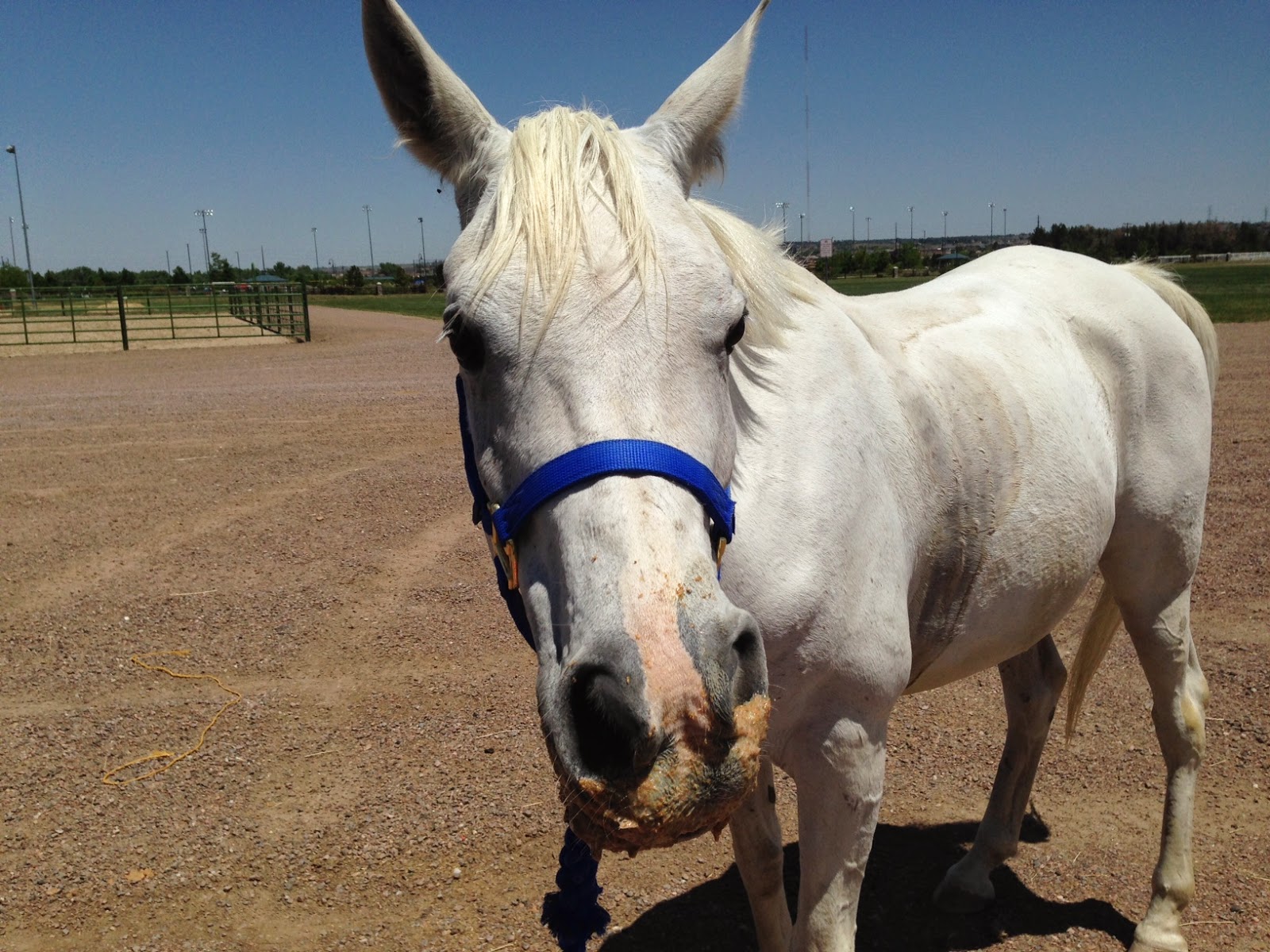 It was every where.

We loaded up and headed home. I washed him and trimmed his tail. J got all of the things we needed in the trailer for tomorrow. Now all we have to do is sleep.
Posted by Cricket at 8:18 PM