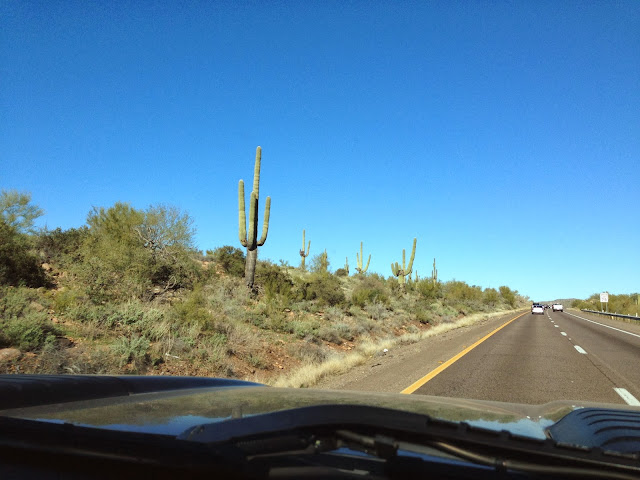 The varying terrain we drove through was amazing. We left Phoenix at about noon and headed up I-17. The ground was very rocky and the plants were a mix of mesquite and Saguaro. I love the Saguaro. The coolest thing is that the bottoms of the Saguaro are completely tore up by birds and other animals looking for water, but the cactus itself looks completely normal. You would think they would fall over, but I guess that doesn't happen as often as you would expect. 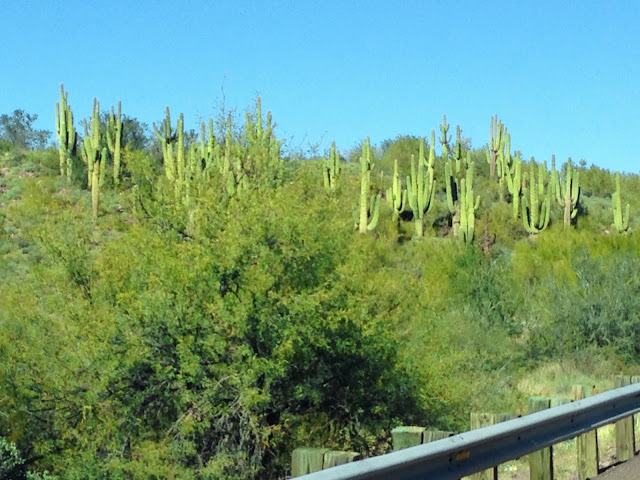 There were huge forests of the Saguaro cactus. You can, if you are dying in the desert, find moisture in the bottom of these cacti, although the barrel cactus is supposed to store more. You cut down the Saguaro, take the pulp out of the middle and squeeze it through your shirt. The moisture you render will keep you alive for a little while. Not supposed to taste real good though. And then you are wandering around the desert without a shirt. Not a pretty sight, in my case. 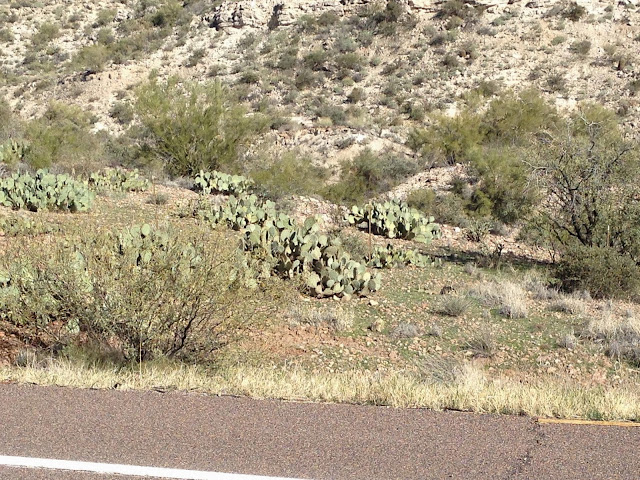 The Saguaro gave way to Prickly Pear, which bear fruit that you can make jam with, although why you would want to is beyond me. You can, however, harvest the young prickly pear pads and roast them over the campfire for food. That and a shooter of Saguaro juice will keep you going for a week. Do you know in Texas the Prickly Pear get as tall as a horse? True that. If you don't believe me then go read Old Yeller. 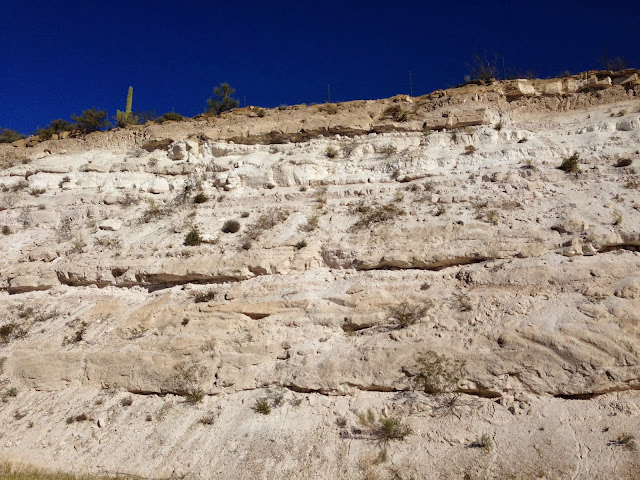 This is the rock wall I stared at for a good twenty minutes on Friday's drive, while we were waiting for the police to remove the small blue car from the tailpipe of the Tacoma truck. I'm convinced the West is mostly rock. 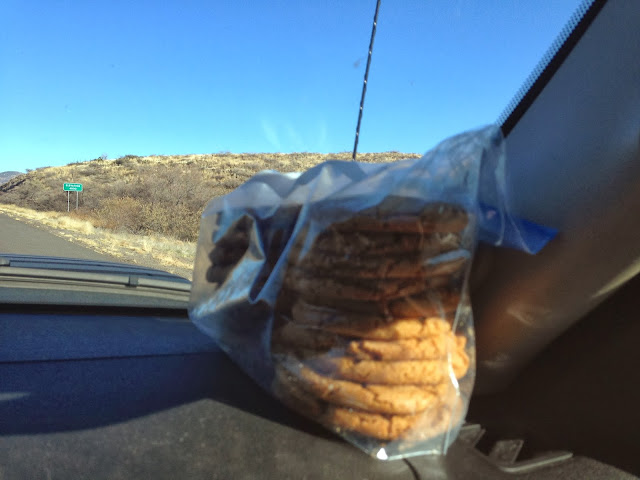 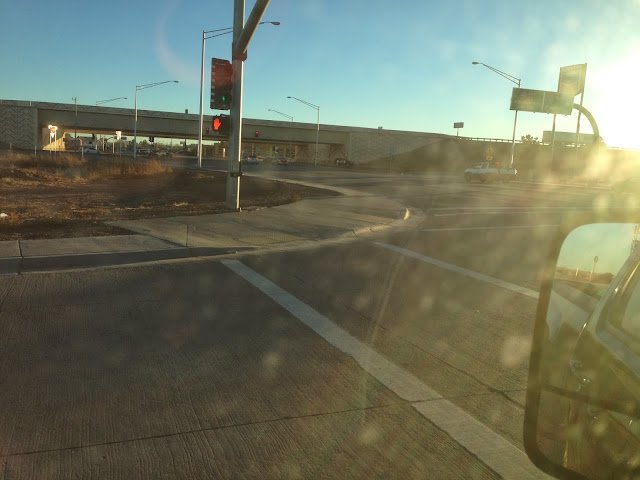 Well, I'm a standing on a corner
in Winslow, Arizona
and such a fine sight to see
It's a girl, my Lord, in a flatbed
Ford slowin' down to take a look at me

Yes, we did stop in Winslow, AZ. I was trying to find a Hopi Trading Post we had stopped at a couple of years back, because it's an awesome store and because we always try to support Indian Nation when we are traveling through. It's not in Winslow. It was about three exits later and I recognized the store as we sailed past the exit at 80. We did not turn around. 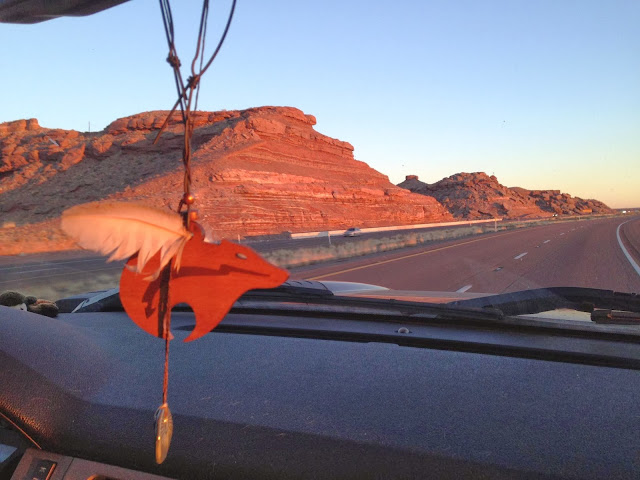 Once you are up on the high desert plains between Flagstaff and Albuquerque, the land turns red. Red ground. Red rock. Red plants (you'll just have to take my word for it) and even red bears, as you can see in the photo. I love the landscape, because you can see for hundreds of miles, but J turned to me and said, "Here we have the definition of agoraphobia."

We are so different.

We got off the highway in Gallup, New Mexico, looking for food. We drove on Route 66 for a bit, but then got back on the highway without finding food (I ended up going to bed hungry and grumpy and dreaming of an Egg McMuffin the next morning. It was noon almost, when I finally lost my shit and refused to be nice or pleasant or friendly or anything other than a sobbing, screaming bitch unless I was given food that had some kind of meat and bread and no freaking sugar in it. That was Subway. I was happier afterward.)

We pulled into the KOA at about 9 pm. For those of you who don't know, KOA is Kampgrounds of America. I started camping in them when I was about six and absolutely love them. We've stayed in them alot with our camper. The cool thing is they are completely dog friendly and rent cabins. You have to have bedding and not be real particular about the amount of space, but for a family traveling with three dogs it can't be beat. Last night was much better than the night we drove out. We positioned the Old Dog right in front of the heater and the pups were much more calm then they had been our first night. Not only do they provide a parking spot for your camper, or a cabin for your use, but they have hot showers in the morning (which I used this morning to help with the stiff muscles I was dealing with.)

We pulled out of Albuquerque at about 8:25 am. 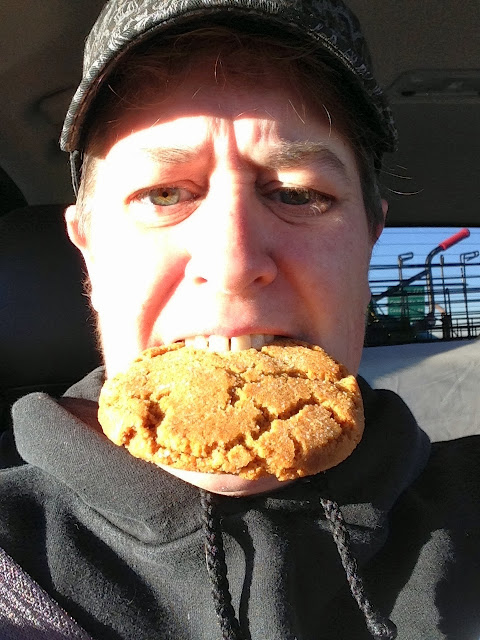 No McDeath for me. I had Molasses Sugar Cookies! Breakfast of Champions!! 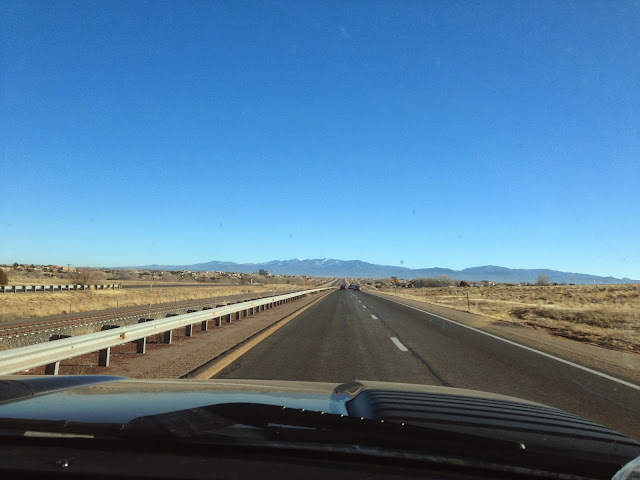 Flying North on I-25. More flat land, although this time it is broken up with some hills and yellow grass. Some very short Cacti. J's favorite. 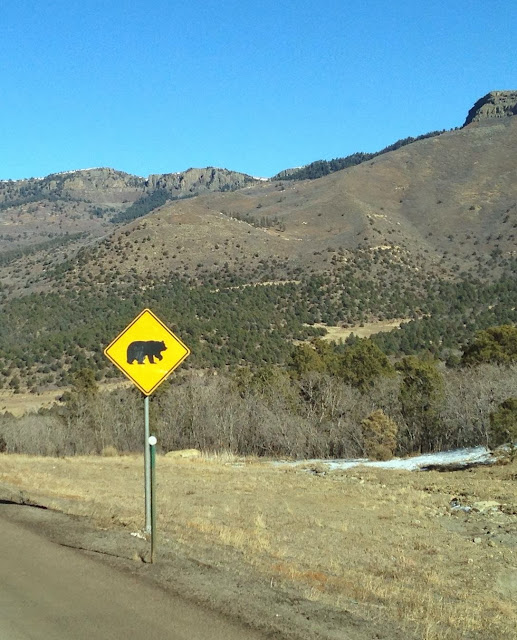 There is a pass between Trinidad and Raton (Raton pass) where you have to watch out for bear.

How cool is that sign? How fucked would you be to hit a freaking bear? 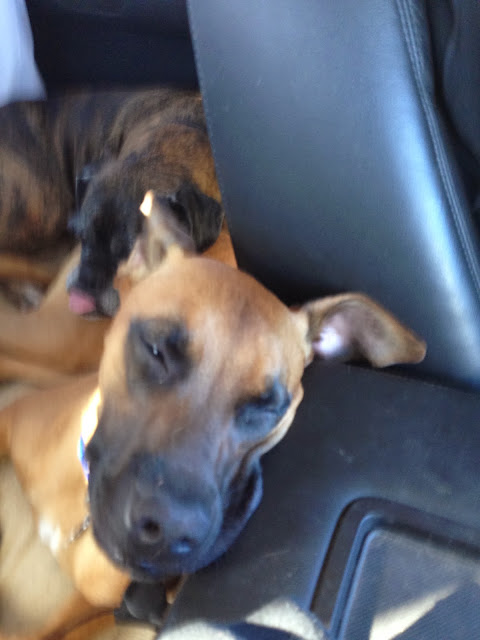 Lily asleep with her head braced on the console. The pups did so much better on the way home. They didn't stress. They curled up and slept most of the day. Everyone is happy to be home, although Old Dog seems to be on her last leg. She is definitely on the downhill side of this final struggle. One more week and she will have lived to be older than all of them. Freaking Energizer Boxer.

So, we are home and safe. J went to bed at 8:30. T is still playing his new Xbox One and Skyping with girls. I didn't get out to see the pony. I was too exhausted and the idea of getting behind the wheel for another minute was enough to make me cry. Not a pretty sight. I have plans to go out tomorrow and ride. Although, after ten days of wonderful weather, the fact that it is snowing doesn't make me happy. From 72 in Phoenix to snow in Denver. Doesn't seem fair.

Hope everyone's holiday was wonderful. Sorry I missed the TTTT this week, but blame it on baking cookies and hanging with the mom. It will return next week.
Posted by Cricket at 11:03 PM