J and I finally made our way out to the barn in the bitter cold to see Ashke. I didn't want to ride, because we were running out of time, but did want to get him moving for fifteen minutes or so to loosen his right hammie. We had gone out late last night to let him play with his ball. He was terrified of it for the first twenty minutes. Then he started picking it up in his teeth and tossing it in the air, then rearing and bucking at it. Of course, he stopped doing that when I started filming.

Today was cold with a high of 23. J and I went by Murdocks and I picked up a pair of thin leather reins. I want to improve the contact between Ashke and myself. The english reins, which I like because they buckle in the middle, were $60. The western reins were either roping reins, which are too short and are one piece, or they were really long reins with heavy decorative elements. J finally found a pair that were as long as the English reins, without the buckle, but only $22. The ends that attached to the bit were kind of bulky, but I fixed that in about five minutes with the hole punch I bought. I didn't add a buckle to the reins, but I did buy a metal thingy that works as an impromptu buckle. $22.59. Sure beats $60.

Of course, I didn't use them. I put them on the bridle and then put the bridle away. I held Ashke while J brushed him. Then we went to the indoor arena and I made him trot and canter in a circle around me for 25 - 30 minutes or so. Not enough to make him sweaty. Just enough to warm him up. J said she thought he was moving easier. I agree. And when he was working to the left at the canter he was able to held his lead on both the front and the back most of the time. Definitely longer than he's been able to since his adjustment. His topline is developing each day and I can see the muscles rippling and moving beneath his skin as he trots and canters. His neck is amazingly arched with muscle and his butt just gets better every day.

Overall, he seems to be settling in. His anxiety at being separated from Cali has diminished. He was really snorty and blowy in the arena on Friday night. Today was a little better, but he's decided his ball is out to eat him.

After our workout, we loaded the saddle in the truck and brought it home. Then I did this: 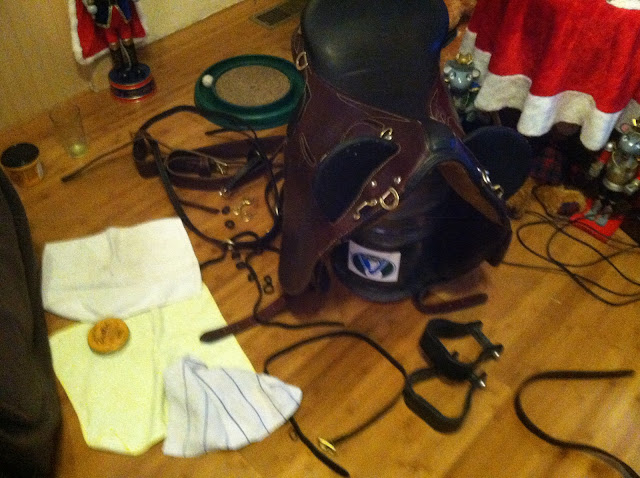 The saddle was used when I purchased it and hadn't been cleaned since I got it. I spent several hours soaping it and then waxing/oiling it. I fixed the stirrup leathers so I can shorten them enough for T to put his feet in correctly. We talked to him about taking a lesson or two from Cinnamon to see if he would like to really learn to ride or if he just likes the idea. I think he likes riding, but isn't crazy about the taking care of part. 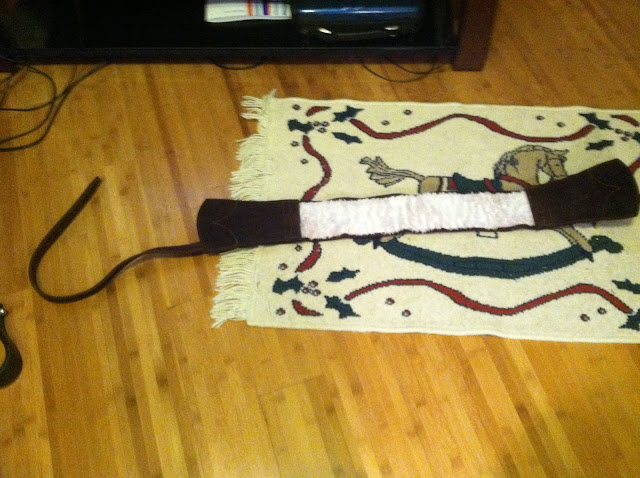 The cinch is finally clean. It is still wet so I need to oil the outside of it once it is dry. The sheepskin looks so much better.

Ashke was tucked in tonight with a bran mash in his winter blanket.

I can't wait to see what the new farrier thinks of his feet and what we can do to make his movement better.