I know you all have been waiting to hear what is going on and I'm sorry for keeping you waiting. I have been so exhausted that I can barely speak. Saturday was an incredibly stressful and terrifying day for all of us.
We got to the barn about 3 pm (because we were cleaning house and shopping at Costco). The weather had cooled down from the low 100's to the upper 70's with rain, which has been a real relief. Unfortunately, that is one of the triggers for colic in horses, according to a lot of people at the barn. Me? Clueless as ever.

Saturday was the first time Ashke didn't whinny when he heard us in the barn. I thought maybe he was distracted by the other things going on. But then Ashke acted a bit squirrelly when I was tacking him up. I thought the flies were bothering him and sprayed him down with fly spray. He didn't seem to enjoy his grooming as much as normal and he was very cinchy when I put the saddle on his back. He has been getting better at not protesting about the saddle too much but he always lets me know he really isn't interested in having the cinch tightened. I should have been more cognizant of his reactions. It's just that I don't think "colic" when a horse is acting up . . . I think . . . storm moving in, cooler weather, general grumpiness. Colic didn't even enter my mind.

We went to the indoor arena, since the outdoor ones were wet. One of the other owners had turned her two horses loose and were chasing them around the arena with a carriage whip. Both horses are Arabians, so they were flagging, snorting, kicking out and tearing around. Ashke acted like there was a mountain lion about to eat them and started acting up. I ended up taking him to the round pen and turning him loose. He trotted and cantered around the round pen by himself for five minutes or so, until he finally settled.

I took him back into the indoor arena and worked him for about 25 minutes. He went okay at the walk, but was sluggish at the trot. J told me he was paddling with his hind feet (he so needs a trim) and I could feel him bog down a little in the sand, so I didn't push it. I figure there will be time for that when his feet are finally worked out. After our ride, I rinsed him off and he posed for pictures. 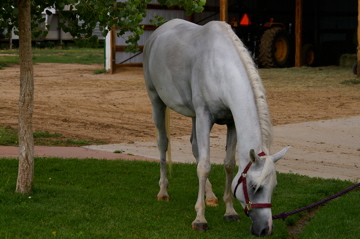 In none of the pictures we took on Saturday, which was 14 weeks, does he have his ears forward. 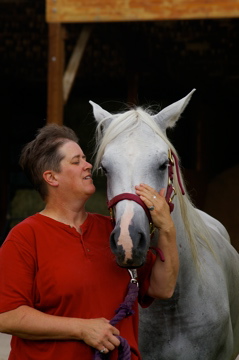 In retrospect, I am sure he was colicking when we got there, I just didn't recognize the signs. Grace said later that night that it was an indication of how bonded he is with me that he would work while he felt so awful. 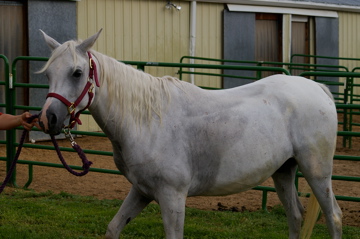 See his ears. Not happy. 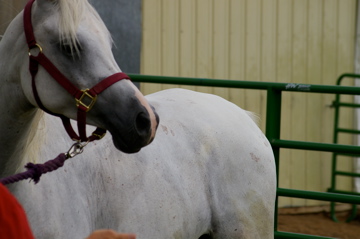 You can see how much mass he has gained in a little over three months. 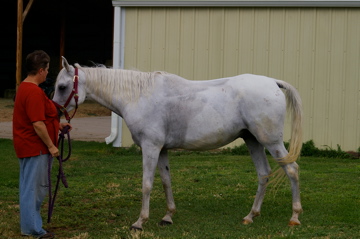 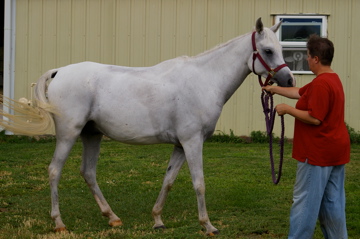 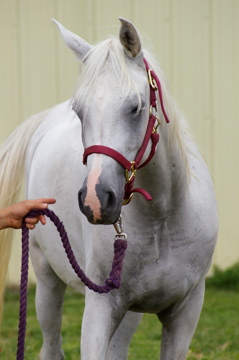 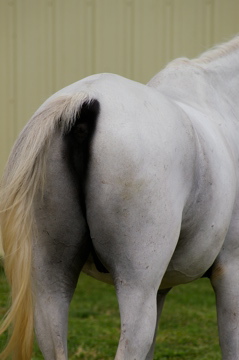 And his butt. Nice, huh?

After the photo shoot, we put him back into his stall. Ashke could hear the hay truck coming and he was whinnying and carrying on like the other horses. I put carrots and apples in his bin, but he wasn't interested. I thought that was unusual, but figured he was holding out for his nightly grain. We left the barn about 4:45.
Grace called me at 5 pm and said Ashke wasn't eating and was trying to lay down. Everything clicked and I knew he was colicking. All of the little clues clicked in my head and I was suddenly terrified. It felt like this was it and he was going to die. Seems like a extreme reaction? I had two horses die on me in my life: Crystal and Ace. Both of them colicked. Both of them died. One quickly and one slowly in a great deal of pain. There was nothing we could do for either of them. I think that might be playing in the back of my mind. We turned around and headed back for the barn.

I got Ashke out of the stall and we began to walk up and down the stall aisle. That was the only thing I knew to do. Grace was there and she administered a dose of banamine orally. He was warm and a little sweaty under his mane. She said that most times the banamine will resolve the issue. If it doesn't resolve within 30 minutes to an hour, then we should call the vet. The banamine took the edge off and his temp dropped, but he was still uncomfortable. After 45 minutes it was obvious the banamine was wearing off so we called the vet. I told her what we were doing and she said he could be in his stall as long as he wasn't rolling violently. I put him in the stall and waited for her to get there. It took about an hour and 45 minutes.

During that time, Ashke showed signs of being more and more uncomfortable. He pinned his ears, snapped at his belly, backed and paced. The vet finally got there and examined him. She said she thought there was a displacement and we should really take him to CSU. The initial examination would be about $1000 and surgery would be $5000 - $8000. I knew there was no way we were doing surgery. I called L and asked if she could transport him to CSU for us. She dropped what she was doing and went and picked up her horse trailer. While she was doing that, the vet told me that if we weren't going to even consider the surgery then there was no sense in driving him to CSU. We had L bring over the horse trailer anyway, but figured we wouldn't need it.

The vet left us pain medication and told me to monitor him for increased pain. She said if his bowel twisted it would be downhill pretty quick. We administered a dose at 10:30. When he came out of the pain medication he ate a little bit. By 12:30 the boys were done and J took everyone home. I spent the night in a chair, leaning against the wall where I could see him when I opened my eyes. I gave him a second dose of medicine at 2:00. By 3:30 he was pacing and in constant motion. He pooped a little bit a couple of times during the night, but it wasn't close to his normal amount.  At four, he cast himself in the stall, managing to wedge himself between the door and the waterer on his back. I opened the door and managed to help him move himself enough to get up. He scrapped the skin over his right eye and banged up his back left ankle. But he was up. I moved him to the indoor arena at about 4. He went to the far end of the arena and laid down with his legs straight out and stiff. And then he laid there for the next two hours.

At 5:30, I thought he was dying. I called J to tell  her. She woke the boy up and said they would come out. I called the vet and told her what was happening. She agreed it sounded like we needed to put him down. She made arrangements for his body to be picked up. She told me she would be there about 6:30. I texted Grace and asked where she wanted us to put the body and she told me. When the vet got there we went out to get him up and move him. It took some encouraging to get him to his feet, but he finally made it. The vet checked his heart rate. It was 40 bpm. Normal. He walked outside and started to graze. The vet did another rectal and said things still felt displaced but as long as his heart rate was down, we wouldn't take any action.

I put him back in his stall after letting him graze for 30 minutes or so. Then I went home and showered, slept for an hour, ate and drove back out. We spent the majority of the day with him. Ashke was pissy and didn't want to be bothered. He was also very hungry. He farted for 45 minutes at a time and had several nice, good looking poos. We left him about four and went home.

Ashke seems to be fine. He is hungry and kind of snatchy when it comes to giving him treats. I think he has some mental issues with food and being hungry so hopefully this will resolve itself as he begins to understand he's not being starved. All's well that ends well.

I still feel tight inside, like its not over. I don't know how long it will take for me to feel better and not edgy or worried or watching every move he makes for signs of another disaster.