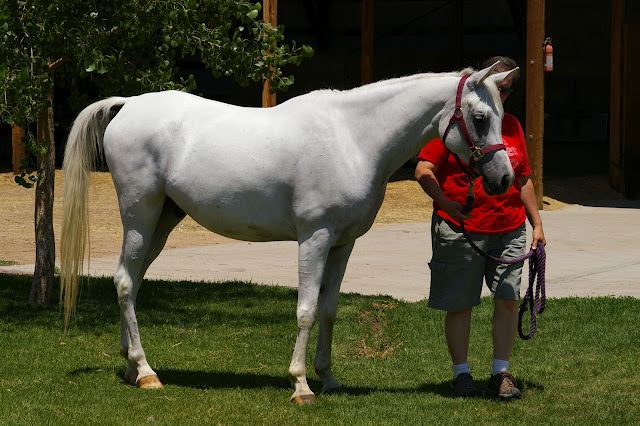 1. We have conquered the biting, nipping thing. I was turned onto a particular process for training by a friend; it's called the Tellington TTouch Training program. The process involves touching the horse in a specific way, as identified by Linda Tellington-Jones, called Ttouch. There is a group of touches for the horse's mouth to help with biting. Linda's perspective is that a horse is biting to communicate an emotional need and by touching them around the mouth in a specific way, it fulfills the horse's emotional needs and removes the horse's desire to bite.

I started the TTouch mouth touches on Saturday. I did circles on the sides of his mouth, worked on the end of his nose and chin, and worked inside his lips with my fingers. On Saturday I got nipped once. Ashke knew he had caught me (I don't think he did it on purpose) and tossed his nose in the air. I didn't react, calmed him with my voice, and continued the massage, making sure he couldn't pull my finger in between his teeth again. When I was done, we went outside to the outdoor arena. On the walk out he reached out and lipped at my hand. He immediately stiff legged and threw his head up in the air. I talked calmly to him and started the touching on his mouth again. I worked on his lips for a good five minutes. I asked him when I was done if he was okay now. He shook his head and blew out his nostrils.

On Sunday, I did the mouth touches again prior to working Ashke. He didn't bite or lip the entire day. 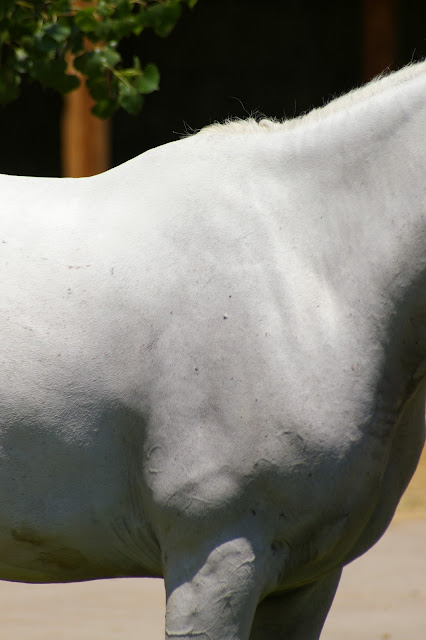 2. The colic symptoms are gone. I have started Ttouch's for stomach and digestion. This involves stroking Ashke's ears from the root to the tip and doing special stroking on his belly. He loves the ears. He closes his eyes and lowers his head. I think it is helping relieve the residual tenderness left from last weekend. His stool looks awesome and he peed a ton between Friday and today. He seems to be doing good on the hay and Amplify, which is the perfect diet to prevent any more colic. The only thing I could do to add additional nutrition is supplementing with beet pulp, which he isn't working hard enough to justify. 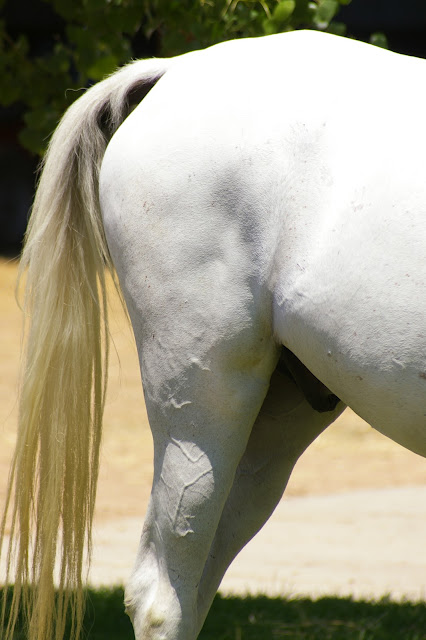 3. Ashke and Callie have spent some time together his weekend. On Saturday, I built a playground in the arena for the horses to play in and experience. I built a labyrinth, a fan with alternating heights on the bars, a plastic walk through. a jumble of poles for the horses to pick their way through, cavaletti with two low jumps at the end. In front of the jumps I put pinwheels which spun in the wind as the horses went over them. Finally, there was a couple of poles with a hammock strung at the top for the horses to walk under. Ashke managed to hook a pole between his legs and completely freaked himself out. I tried a body wrap, like Tellington recommends, but that didn't really work. It made him more anxious. I was getting very frustrated, which was being communicated to Ashke and making things much more tense then needed to be. The biggest issue was that Ashke had completely gone frozen with fear and confusion. I went back to the come-along and he was able to move through all of the obstacles without fear or a lot of balking. After we had gone through all of the obstacles with the come-along, I took the rope off and he went through all of the obstacles without much coaching.

It seems like the colic episode caused Ashke to revert to some of his behavior when we first moved him out here. It's taken some remedial work to get him back where he is willing to work with me again. I think we have made progress.

Today, Ashke worked in the round pen briefly, in the surcingle and bridle. He looked great, did what I asked and didn't fuss. We then took a mile or more walk with Callie. During the walk Ashke jumped a ditch (didn't even hesitate) to greet a couple of horses. After we jumped the ditch back to the walk way, he got fussy and reared. I told him no in a firm voice, but otherwise didn't react. He settled right back down and we went on our way. He was very responsive and does so much better when I don't over react. His rearing wasn't directed at me, I think it was directed at the other horses, but he still needs to understand that it's not an acceptable behavior. 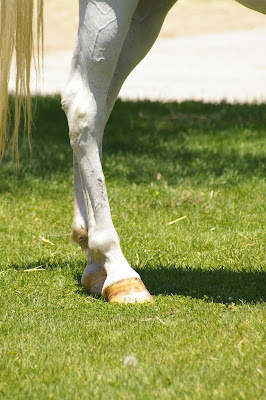 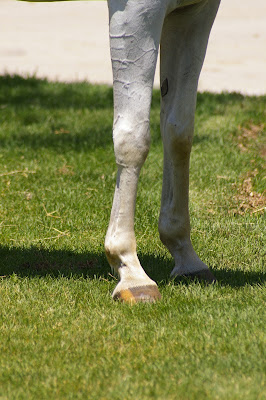 4. The farrier returns on Thursday. It will be interesting to see what he says and how Ashke moves when he is done. I don't plan on making another appointment, wanting to talk to the woman from Berthoud out natural hoof care first. 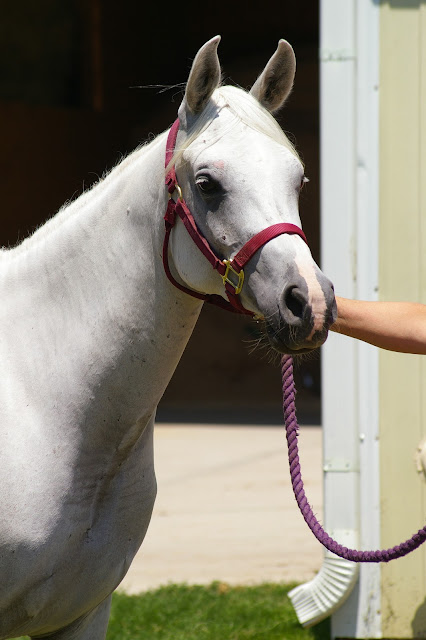 5. This weekend was full of purchases. We got a Chevy 3500 and a stethoscope. The truck is necessary if we decided to do endurance, because we can put a camper in the back and still haul a horse trailer with it. It is a gorgeous truck. J looks wonderful driving it. The stethoscope I purchased for the horse. Being able to monitor his heart rate will be key if we face another colic situation. It will also let me monitor his condition by tracking his heart rate once he is working again. 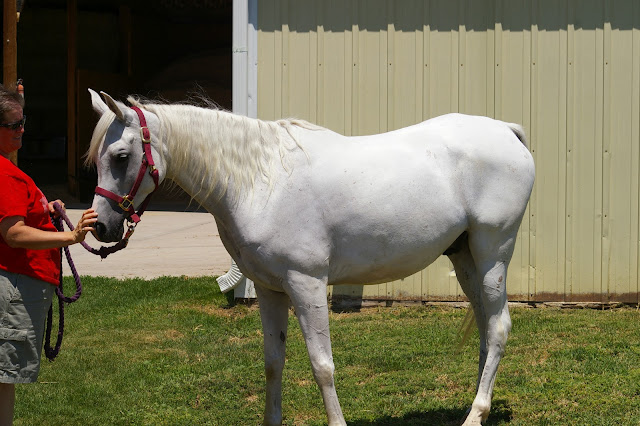 6. I may have to have the vet out to check out Ashke's left shoulder. He had a lump there that felt like he had been kicked. It may still be impeding his movement. It's right at the point of his shoulder. Next time JD is out, I will ask him to take a look. 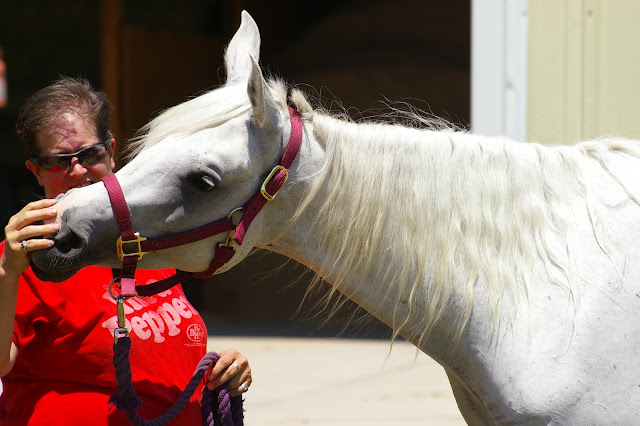 7. Ttouch has helped me reconnect with Ashke too. I think that having made the decision to put him down changed how connected I was feeling to him. I had to distance myself in order to deal with the loss. It's both a relief and a source of anxiety to discover that you aren't going to be taking that step. TTouch has allowed both of us to move away from that move and connect to each other again. J thinks that Ashke has the emotional maturity of a two year old, even though he is much smarter than that. Anything that scares him or brings him pain is going to reduce him emotionally and I need to remember that I need to be calm and patient in order to help him grow. I think the Ttouch exercises will help. It certainly has moved me back to the "I can fully rehabilitate him" and he can do anything camp.

Leaving you with some final pictures: doesn't his ass look great? 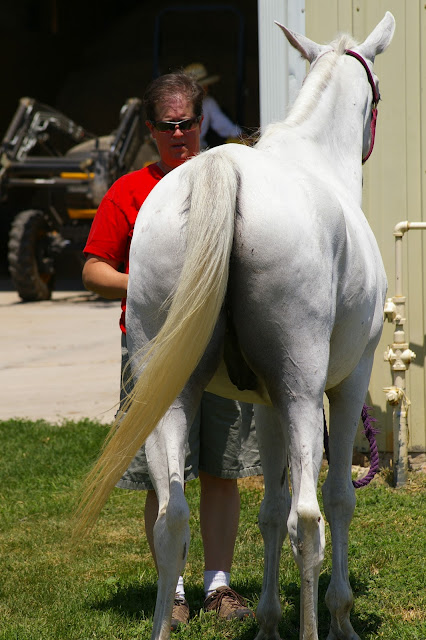 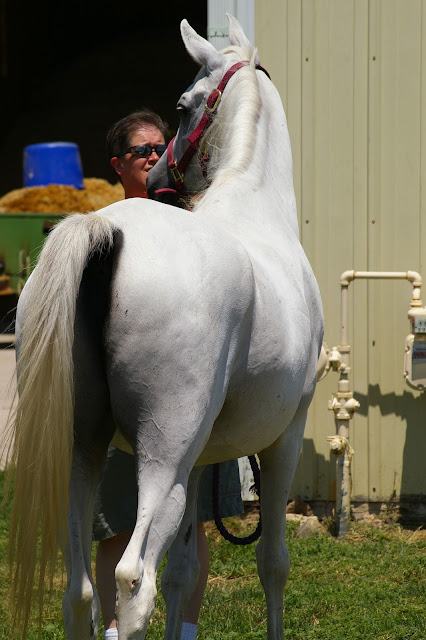 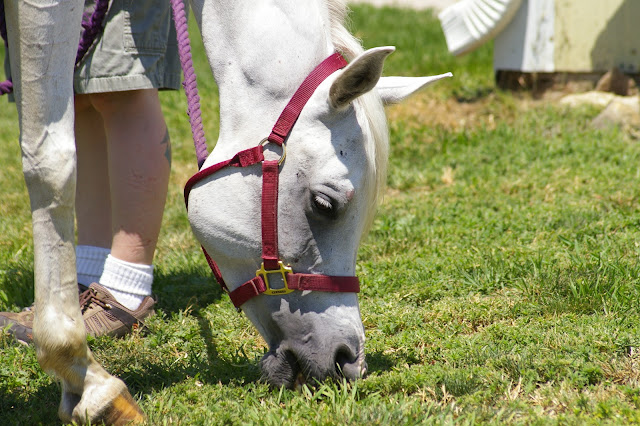