The last time we showed in Working Equitation was June of 2019. It rained all weekend, so the show was inside. Ashke had just started getting injections for his hocks and although our dressage was okay, his behavior in the EOH was atrocious on the second day. I came away from that show having made the decision we were hanging up the effort for good. I stress too much about our performance and he really only wants to do speed all the time. It just wasn't fun. And since my last show was also on the same day that my divorce was final, I wasn't sure what my financial outlook was going to be long term. I made the decision that I would invest in our training with Amanda and put my show ambitions on the back burner.

Some time between then and now, maybe both Ashke and I matured, developed additional skills and listened to our trainer. I completely changed my tack and attire, Ashke got injections, we've rehabbed a serious leg injury, and have consistently taken lessons with Amanda. Last Monday, Ashke and I had a huge fight in our lesson. After the lesson, I walked back out to her and said "he's for sale". She kind of laughed and said why? I answered "because I suck as a rider and I hate fighting with him". She said, "when are you going to learn that you will never win that fight? He is a 1000 lb animal with a mind of his own. The trick is to not fight. And you need to remember that he is Loki in horse form. You need to respond with humor not anger."

Chris agreed when I talked to her later that he does have a bit of Loki in him, and that most Arabians do.

I thought a lot about that conversation over the week. I also thought about the fact that Amanda has been chasing two scores on her FEI Grand Prix horse for the entire time I have been taking lessons. She doesn't get angry, she just keeps working on the things that need to be better. It's humbling. And recognizing that changed something for me this weekend.

For the first time in a dressage test, when I knew I had made a mistake, instead of feeling frustrated or upset, I gave myself a nod and kept riding. No one in the history of dressage has ever scored a perfect 100%. We are going to make mistakes. And with Ashke, there is a likelihood that there are some movements we will never score better than a six on, so a six it is. I was still anxious, but it felt different this time. 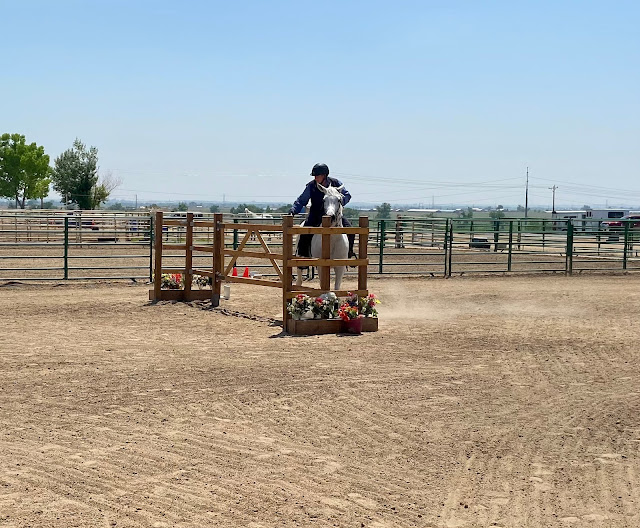 The gate during Speed

I also talked to Ashke on Friday when I went to bathe him. I told him we had two shows this weekend and I needed to wash both his face and his forelock, since he needs to be clean enough to glow. Damn if that horse didn't drop his head and let me wash his face. When I put him back in his stall I asked him to not lay in his poop so that he was still clean the next morning, which he complied with. He was amazing at the show. He stood calmly at the trailer when he needed to and was responsive under saddle. We were there from 8 am to almost 4 pm (the show was over about 1 pm, then we ate lunch together and then we had to reset the course for the following day. I was exhausted and humbled by my horse's attitude. He came back and did the same thing the following day without complaint.

We did two solid dressage tests in two days. We scored 62.11 on Saturday and 61.36 on Sunday. The biggest differences were the walking pirouettes (2x score) and his changes across the center line were all early. The one thing I was able to correct was our entry down centerline (on Saturday I completely forgot to salute the judge and was saved by the fact that the test they had was the wrong one and so I got a do over). The other item I addressed was making sure our canter down the left side of the arena was straight rather than bigger. We were consistent. On Saturday I didn't have a score lower than 5.5, but on Sunday we had more 7's. 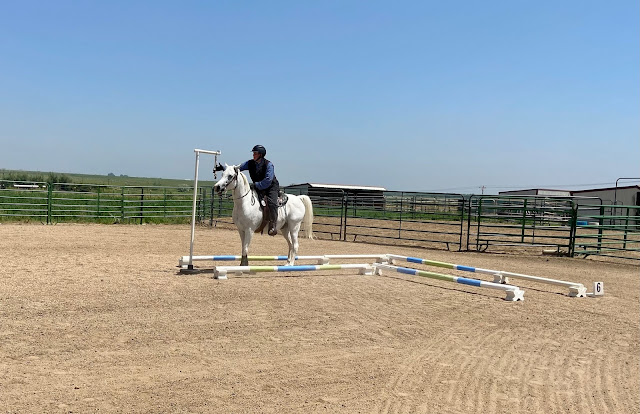 Bell Corridor during speed. We cantered in.

The EOH on Saturday was harder for Ashke. There was a jump (which I practiced at our home barn on Friday for the first time in two years) and the double slalom was seven poles. I knew that both of those would be difficult. We also had a back foot slip in the gravel around the figure 8 barrels. He wasn't the only one and the judge changed the location of one of the obstacles to avoid that slick area on Sunday. We scored a 61.11 on Saturday. We were the only ones in our division so it would have been easy to not race on Saturday, but even when I have the best of intentions of not racing, we end up going fast.

I was worried about Sunday's EOH ride. The last time allowed Ashke to race the Speed on the first day of a two show weekend, he was out of control in EOH the next day. When we were in the warm up arena, I talked to him and asked him to remember to go slow on the first course, that it was the EOH and he needed to listen and be with me. When we first got in the arena, I asked him to canter around the outside of the arena nice and collected. It told me he had listened and was willing to do the EOH course correctly. There were a couple of bobbles. I should have approached the single slalom differently and the change on the figure 8 was entirely my fault for cutting the back of the circle off and not getting him straight for the change. Other than that he did really awesome! We ended up with a 65.0 in the EOH.

Then we got to run speed and run we did. But even when I let him out fully, all it took was a halt from my seat and he came right back down to me. It was so much fun. 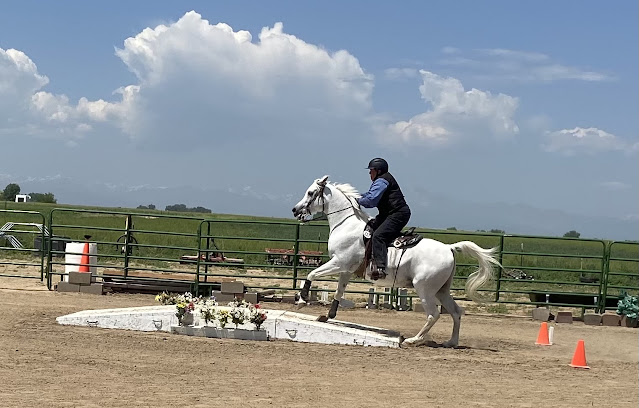 This was the first set of shows that I've had fun participating in. I let the small stuff slide off and enjoyed the partnership with my boy. It was pretty amazing. He was amazing.