Wow, it’s been a while since my last post and all I have to say is that the exhaustion I experienced at the end of the National Championships, combined with work and life have pretty much overwhelmed me. Being the Technical Delegate was amazing and challenging and rewarding, but it was also exhausting. I am usually bottomed out at the end of a show. This one was four days of work and lots of walking, but I got to do it with Chris, which made it even better in the end. Over the course of the four days, I walked almost twenty miles, with the biggest distance on Saturday. In addition to being the TD, I was also responsible for the Course Design, in conjunction with Chris, which meant I was singly responsible for making sure the courses were set correctly, according to the map, and answering any questions during the course walk. The work aside, I was able to meet people and watch riders who I only knew on paper (tallying points from the Confederation licensed shows for Year End Awards). It was awesome to finally put some faces to names. And then there were the ponies. We do this sport because at the end of the day we all love horses and there were some very fine horses competing. 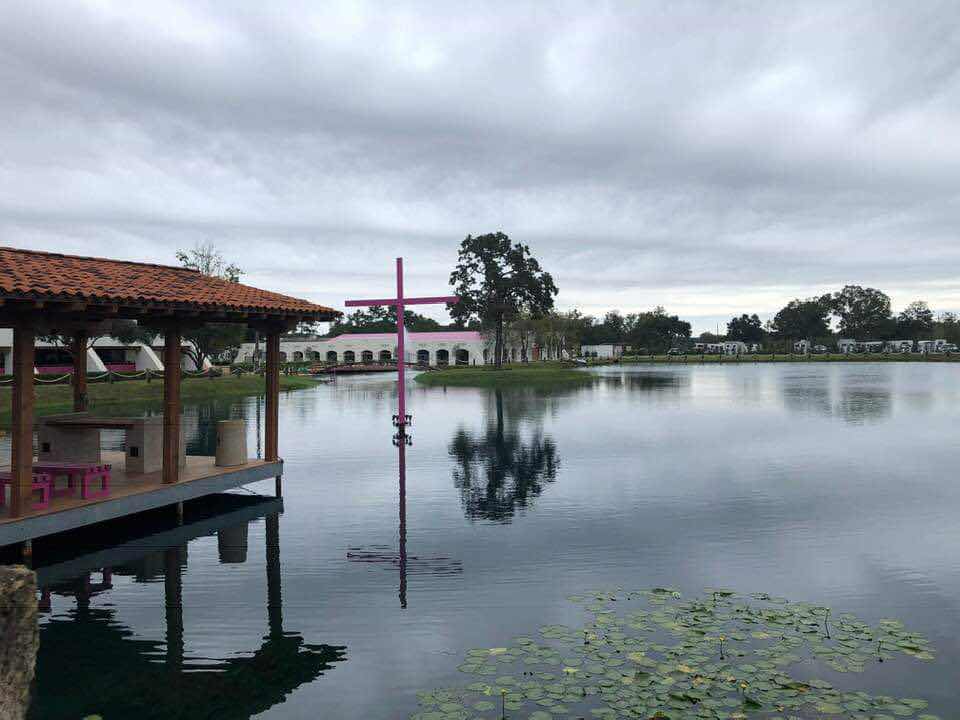 The white building across the lake is the main stallion barn where the Haras horses live.
It was a beautiful facility.
The National Championships took place at Haras Hacienda, in Magnolia, TX. I stayed in a room on the grounds and all of our meals were provided for us at the restaurant (the logistics of managing the officials and volunteers of a National show are not for the faint of heart). The staff was really wonderful and I had minions. Let me tell you, minions are the best, and these minions had obviously hosted WE shows in the past, because they knew the obstacles, how they should be put up and most of the measurements. One of the things I did prior to the show was take the Master’s course map and add all of the measurements to the sheet at each obstacle. I wanted a quick reference guide to help put up the obstacles and as luck would have it, I handed it off to the head minion to use. The workers were efficient and knowledgeable and didn’t give me shit when I asked them to adjust the placement of an obstacle for the twentieth time. 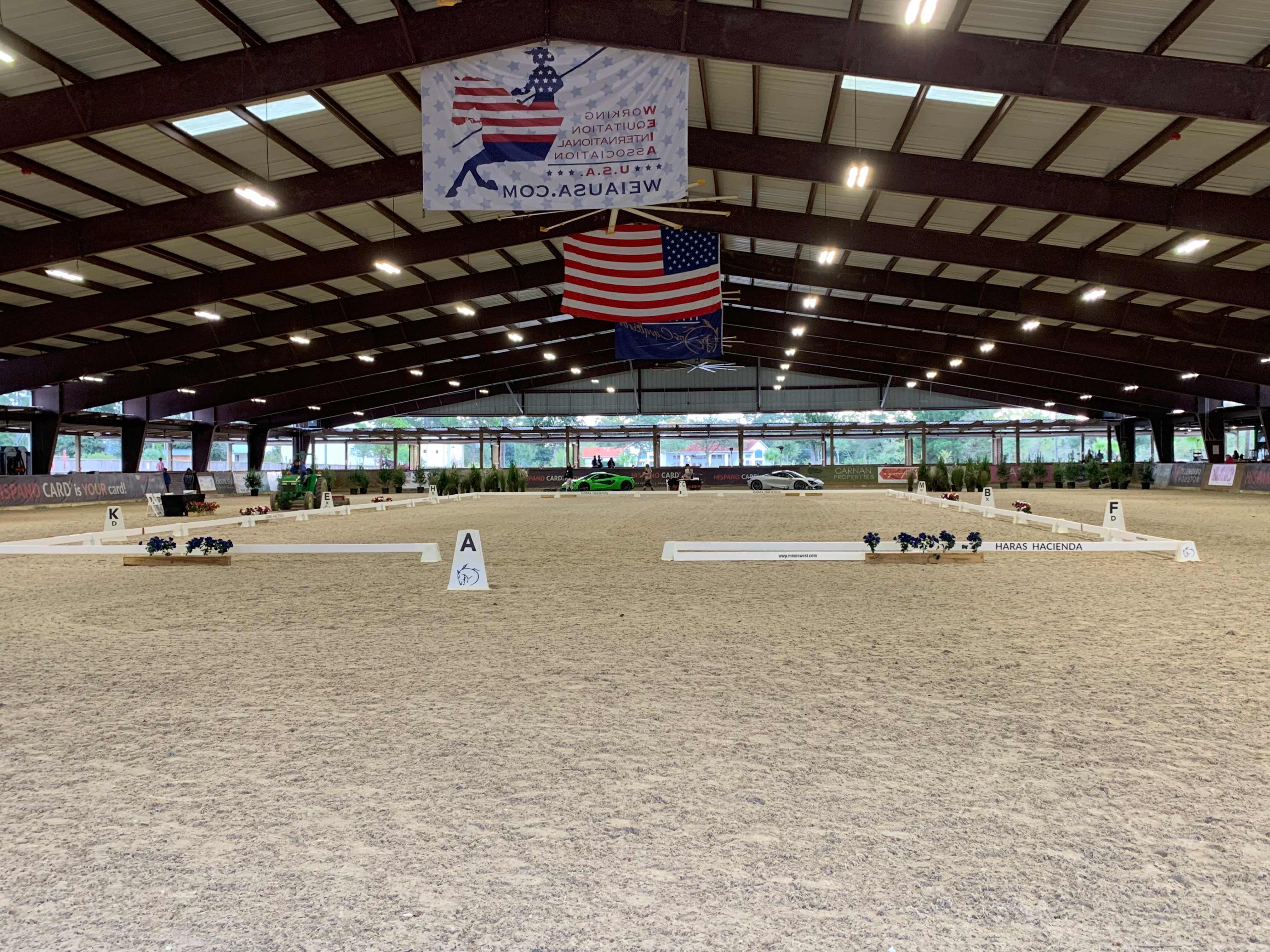 The main arena set with the dressage court
And yes, those are McLaren sports cars at the far end of the ring. When I first saw them, I about lost my mind (I love sports cars) and had to go down and take pictures like a complete tourist who’s never seen a McLaren before (hadn’t) to send to Tristan by way of text. 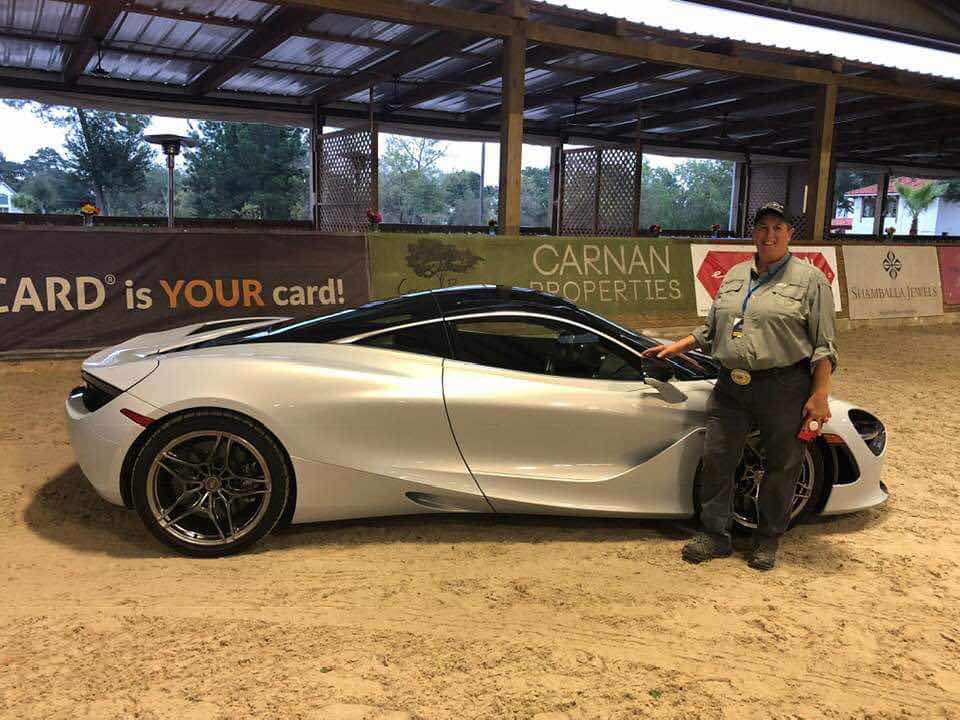 Oh yes, I would take this one in a heartbeat.
I wouldn’t sell it for something else . . . I would drive it like I stole it.
Thursday was a day spent inspecting horses, talking to the riders, sorting ribbons and trophies, and just setting up stuff in general. The footing at Haras was amazing. It is a mixture of silica sand and fiber laid over an under the footing watering system. Every rider we talked to said it was amazing to ride on. Friday was dressage day and the judges viewed 45 rides in eight different levels. I spent the day walking from the main arena (shown above) to the warm arena, about 300 feet away. As TD, I got asked about tack and attire, about riding with a whip, about warm up arena etiquette and got to inspect all of the horses before they entered the arena. Pictures are taken of each rider and their attire, because unlike Eventing where you can have three different bridles, three different saddle and various combinations of said stuff, in WE we are required to ride all three phases in the same tack. Attire can change as long as it is the in the same style (so you can wear clean clothes), although my experience is that most riders wear the same clothes all three days. The most difficult part of the day was not touching the horses. (Big no-no.) 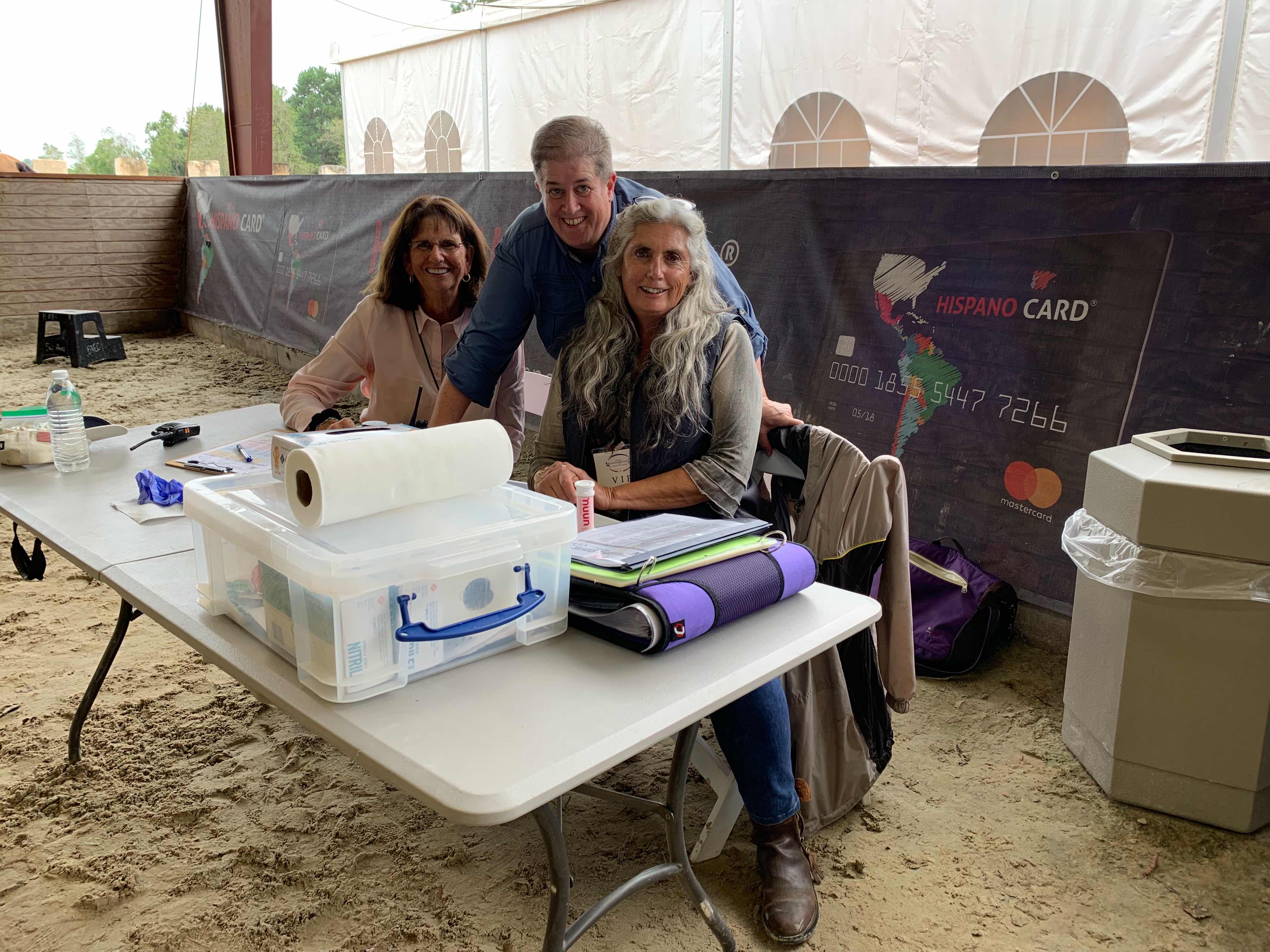 Kate Fowler (Region 3 Director and bit checker), myself and Chris (comrade-in-arms)
At the ingate to the main arena, we had our table set up, with a designated bit checker who also looked for blood in the spur area and at the corners of the horse’s mouth. Luckily, we did not have any issues with blood or attire the entire weekend. There were no really tough questions on Friday and all of the rides went smoothly. After the dressage phase, the dressage court was pulled out and the ring was set up for Ease of Handling. As Course Designer, I directed my minions, walked the distances, repositioned obstacles (which was really fun when you had to leave room to not run over the McLarens), and finally invite the judge to walk the course. It flowed as well as I had hoped, while asking plenty of questions in the approach and navigation of the ride. 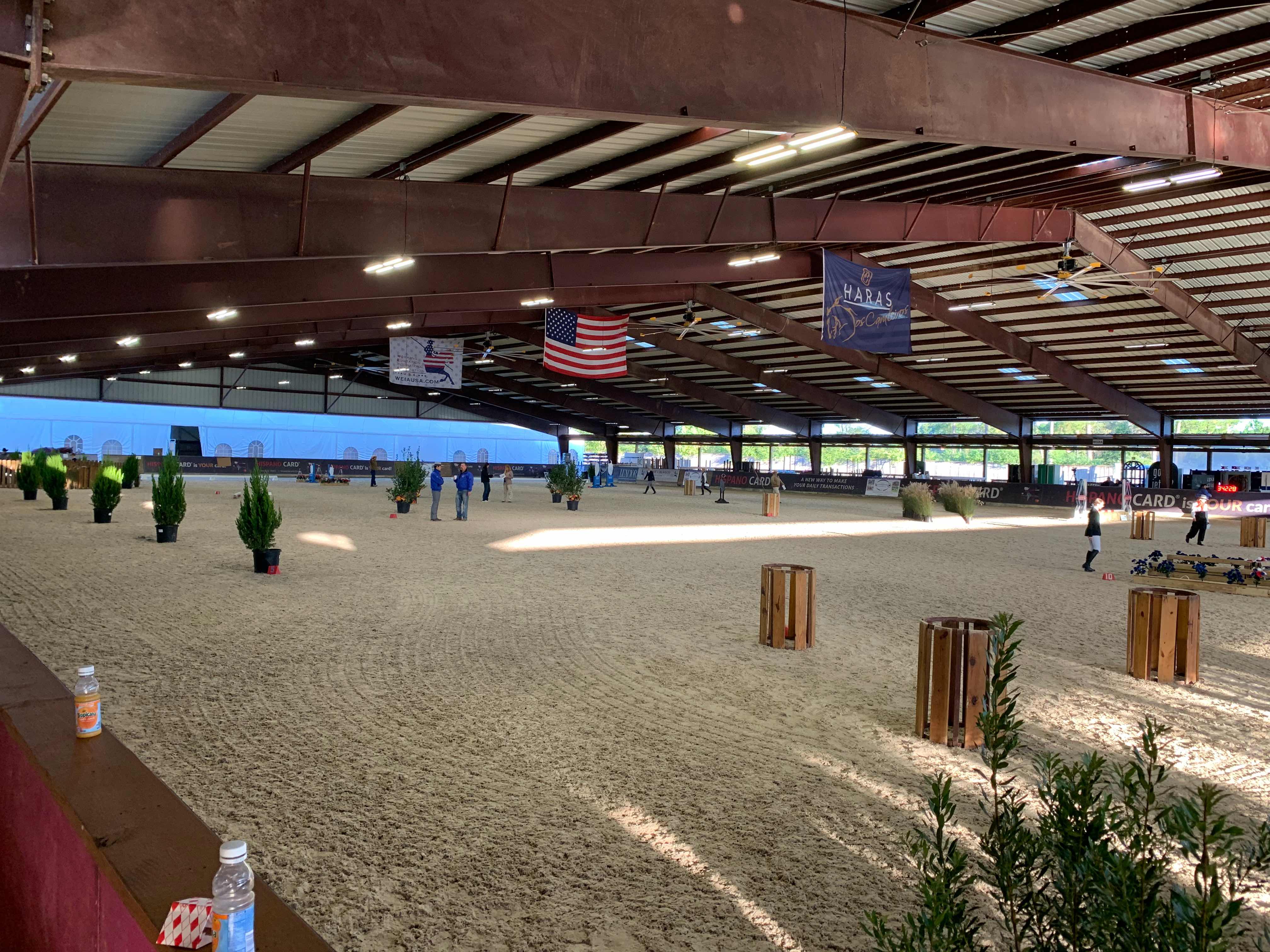 Course open to the riders to walk.
So there are a few keys to making sure the show goes smoothly. First, because it was a national show, every course was different, increasing in length and difficulty as it progressed up the levels. Second, obstacles didn’t move between levels, so once the course was set, it remained in place for the entirety of the day. There were some obstacles that were added or removed for each level, while some of them, the jump for example, was left in place and the number was just removed. Some of the distances (bell corridor and drums) were changed for the Advanced and Masters levels (shorter distances between the barrels, the corridor was narrower) but that was an easy adjustment. Novice A & B rode the same course and Intermediate A & B rode the same course. There was a Course walk at each level once any adjustments were made and the judge had approved the layout. 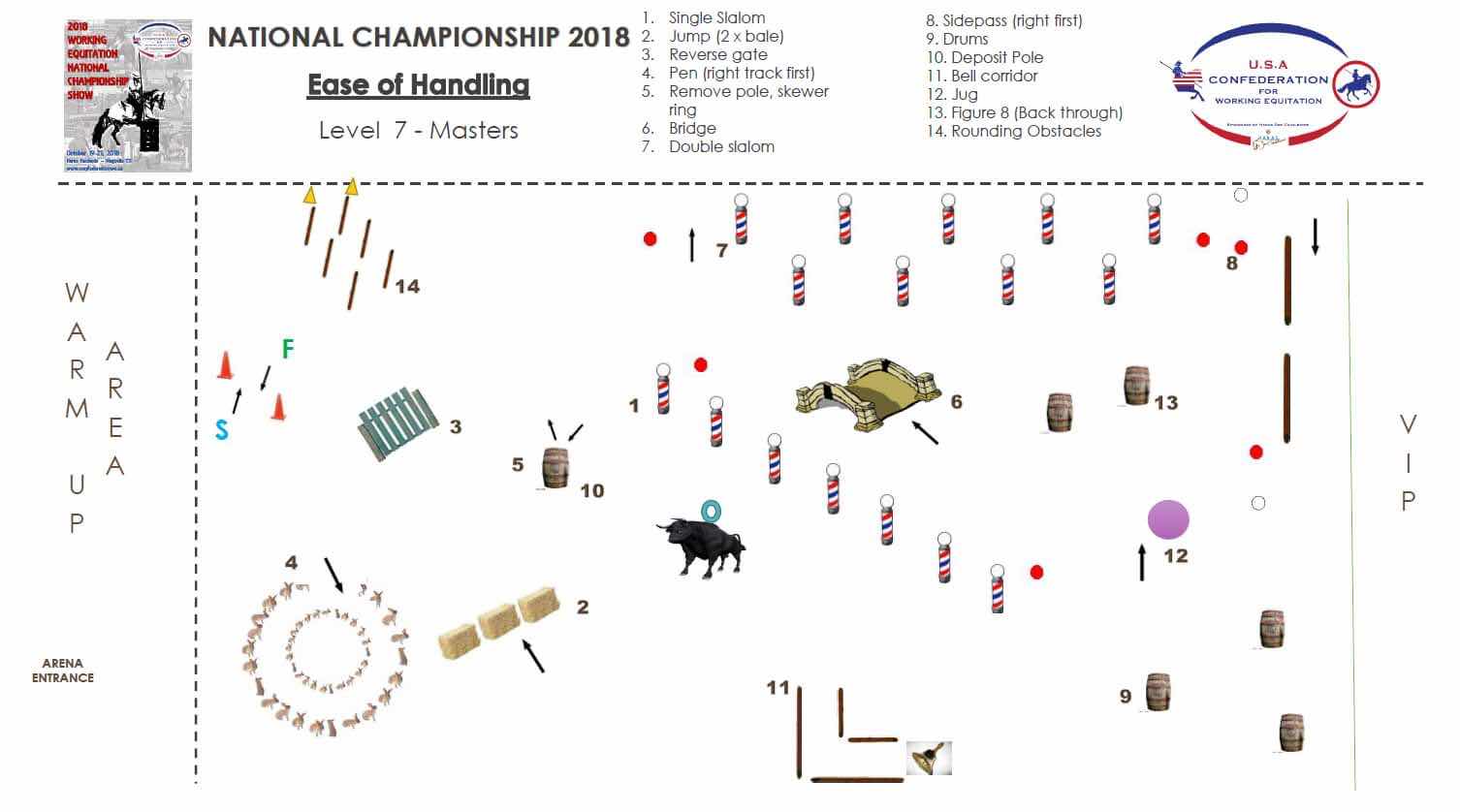 This is the Master’s level Ease of Handling Course.
Note the jump is two bales high (not sure I want to show at Masters if Ashke has to cart my fat butt over two bales of straw).
Also, the single slalom was seven poles and the parallel slalom was nine. 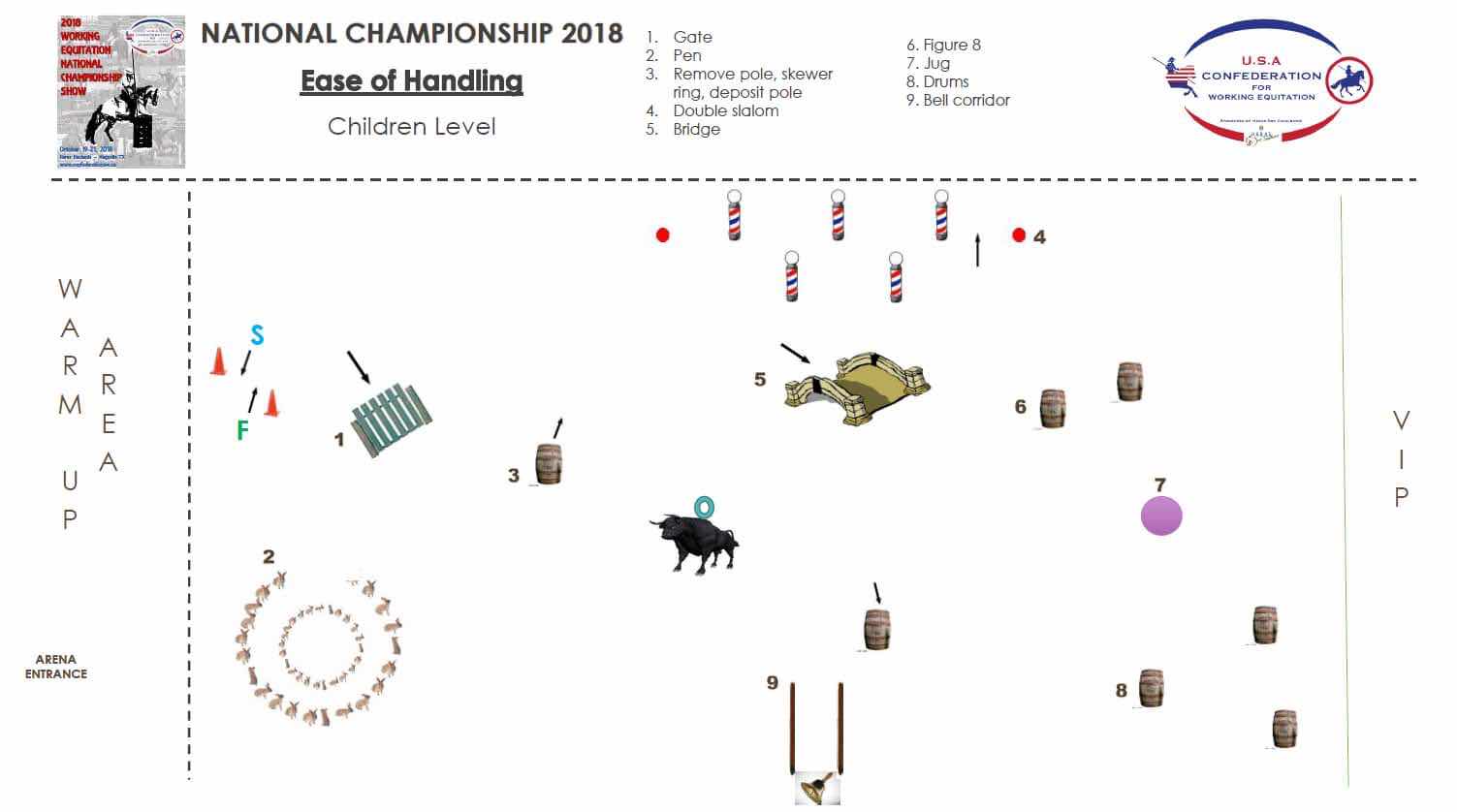 Children Level
We had one rider for this division, and she rode the cutest little Welsh cross pony.
TD Challenge: the bridge was set with live plants on either side (tall grass) to act as the rails for that obstacle. The grass, being grass and bushy, hung over the bridge and would be both visually intimidating and would brush against the horse’s legs as they walked through. One of the riders challenged that obstacle and asked for the grass to be moved. The judges replied that this is a field sport and grass is a naturally occurring obstacle. The rider then turned to me and asked me as the TD. I stepped into the bridge and let the grass brush my hands as I walked through. It was soft and moved easily, offering no possibility of injury to the horse. I stepped back and addressed the rider with “it’s fine”. That was the end of that, but it is a great example of the type of decision making process you will need to be comfortable with if you want to TD. 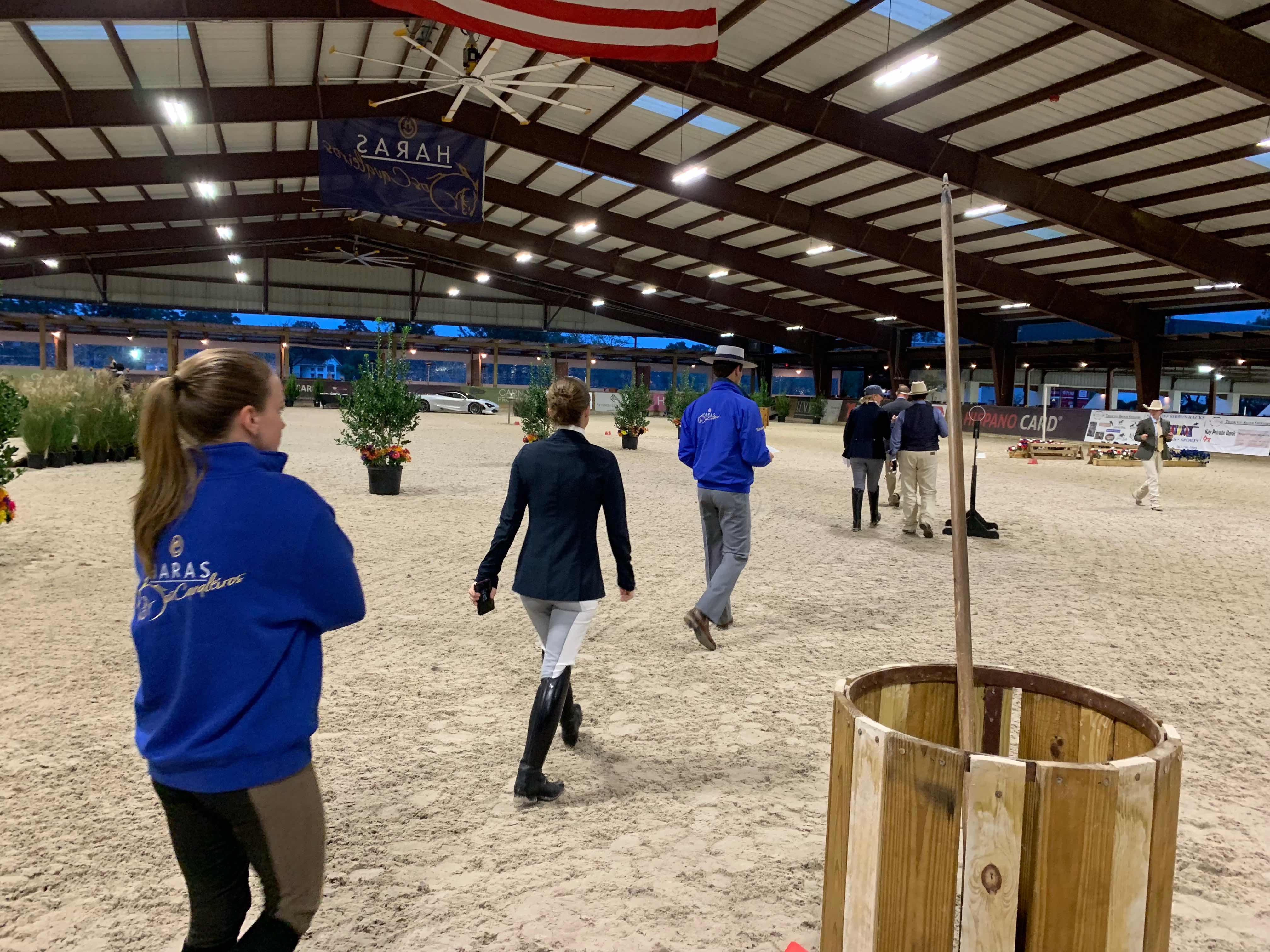 Riders must be in attire for the course walk or it’s a DQ.

The Ease of Handling course rode as well as I could have asked. I heard from several riders that the course was challenging, but flowed well, and although there were some lines chosen I hadn’t considered, they were all decent. Probably the hardest set of obstacles to ride was at Advanced, where the riders came over the jump and then had to stop at the gate. That really showcased the rider’s ability to have enough speed to jump the straw bales, but then to demonstrate control by halting before crashing the gate. It was fun to watch the upper level riders. 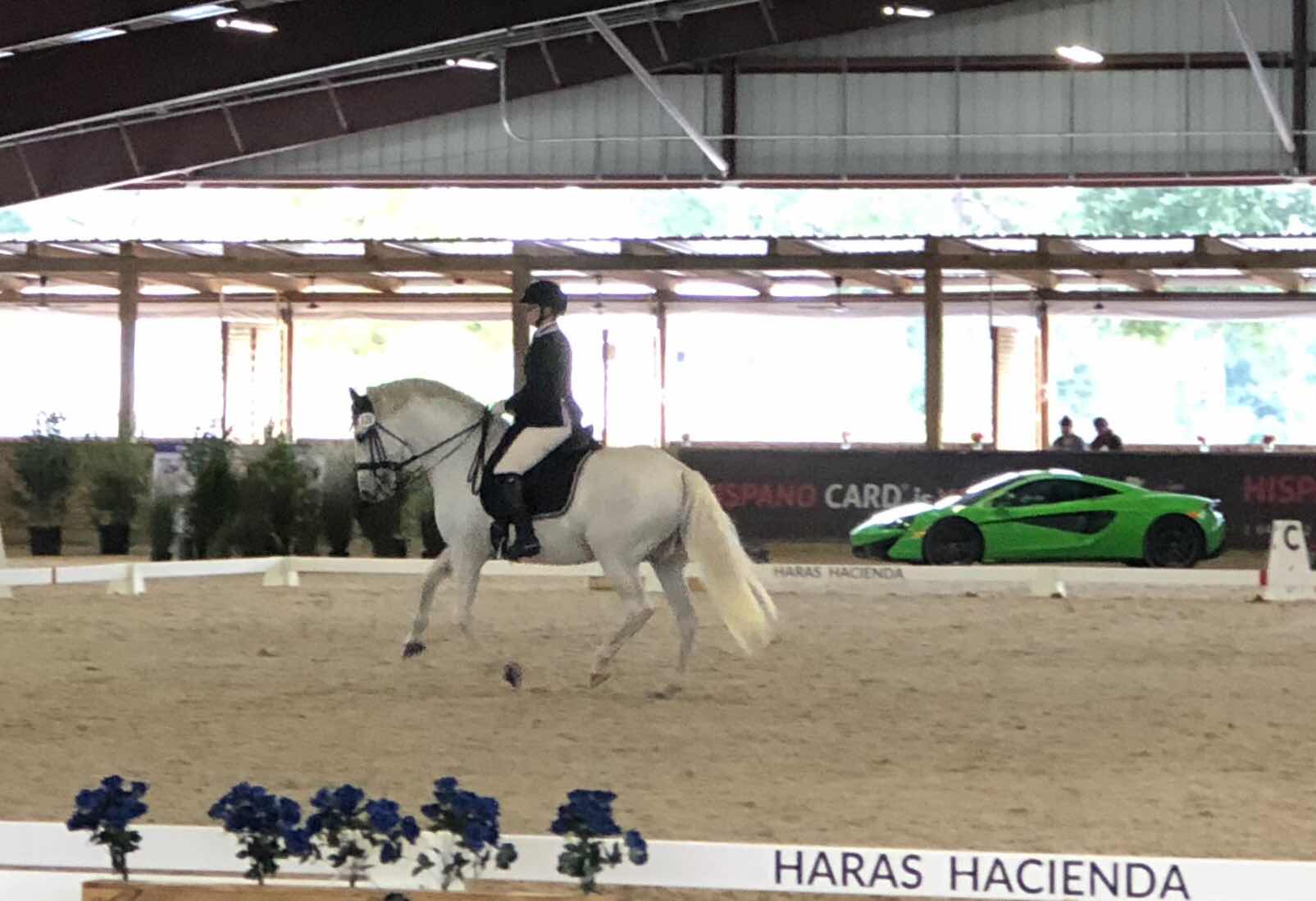 And I got to meet this woman in real life.
Andrea McNeal on Dylan.

At the end of the day, we moved the obstacles to set up for the Speed round. For Speed, there were some changes of the numbers between levels, but for the most part it was a fast, smooth course. The only change between Novice and the other levels was a slight repositioning of the Pole, Ring, Pole obstacle, otherwise smooth and easy. There were a few bobbles, where the riders had to dismount and pick up an object, remount and replace the object before advancing. The Switch a Cup was problematic for a lot of riders and horses not wanting to stand still. One rider was blazing fast and overshot her turn into the parallel slalom, missing her first pole and eventually DQ’d on the course. If she had caught her mistake, she could have reridden the obstacle before moving to the next one.  Sometimes, fast is not better and rating the speed within the gait is what makes one truly successful at this phase.
After Speed, the minions pulled the course, I finalized some of the paperwork, and then we headed to the field for the Cattle Phase of the competition. Since the Cattle Phase is a team phase, the riders that opted to participate were randomly drawn from a hat and formed into teams. 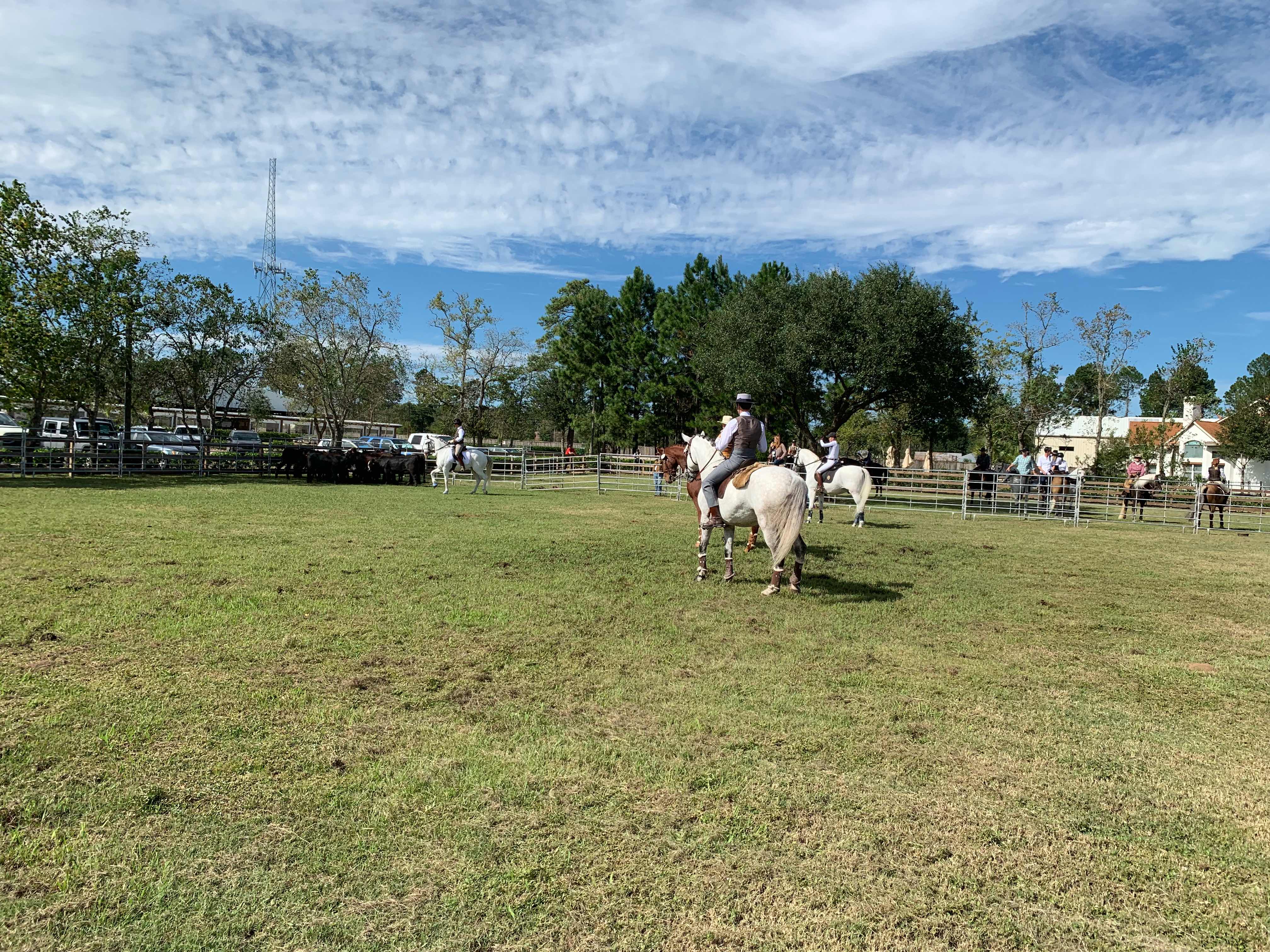 The Cattle Phase should be a four person team, with one person at a time cutting out their designated cow and moving it down the field to the holding pen. It is a timed event and each rider gets three minutes. 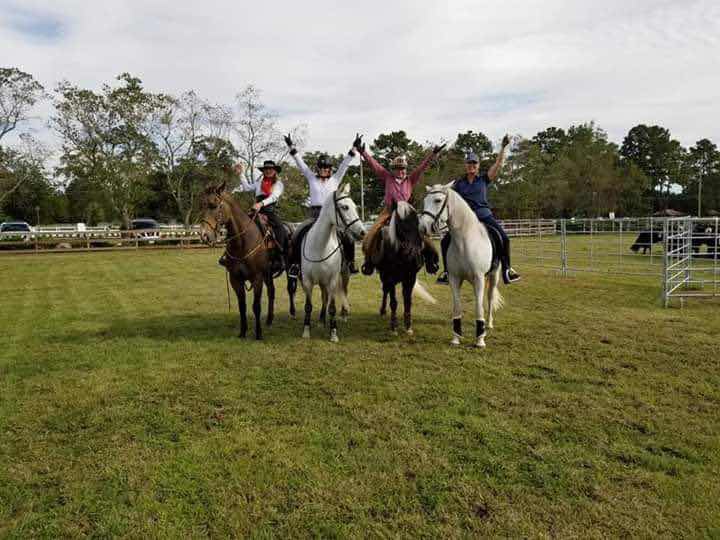 The only team to pen all four of their cattle.
This was the first time the Cattle Phase had been offered as a competition at a National Show. It inspired us to commit to doing Cattle the same way at our B-Rated shows, so that our riders can get experience. At the National Show in 2019, I am hoping that HCWE will be able to field a couple of teams to compete in the team phase. It was fun to watch and it was pretty obvious which horses were used to being around cattle.
Overall, the show ran very well. It was a testament to the volunteers and the show manager as too how smoothly the show ran. I enjoyed my time as TD and picked up some tricks to make managing a show a bit smoother. There are also some items that need to be addressed as an organization, but I am sure that will happen going forward.