I spent the day on Friday at the Stockshow with a group of barn friends, which included lots of laughing, food and some retail therapy. We ended the evening watching Gambler's Choice jumping show and enjoying the fact that I have zero desire to careen around an arena at mach 10 with limited steering and am thankful for the sport of Working Equitation.

One of the items we found was a set of Rhythm Beads. I've thought that it would be helpful to have them for some exercises in the arena, and would help me with confirming our rhythm, besides that, music is supposed to sooth the savage beast, so what would it hurt, amiright? 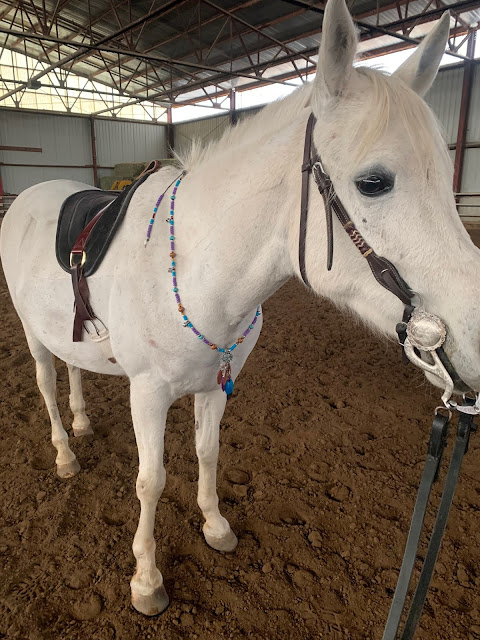 They are a turquoise blue-green, with purple accents and round orange beads that turn colors when they get warm (remember the mood rings in the 70's). The center piece is feathers and a shield wheel for weight. 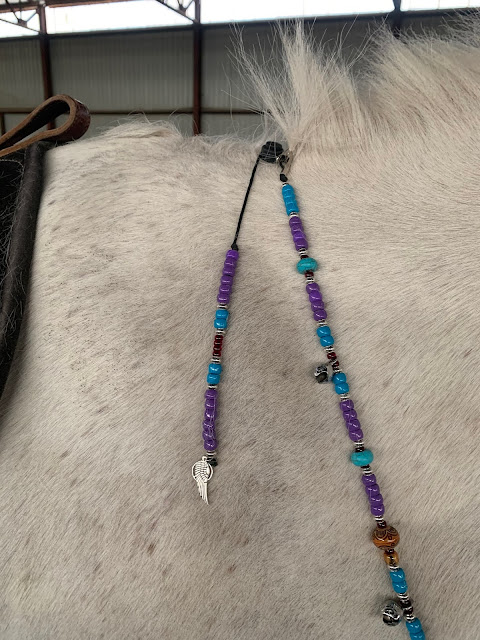 They also came with three strands to be hooked into the horse's mane, which were on the other side of his neck. 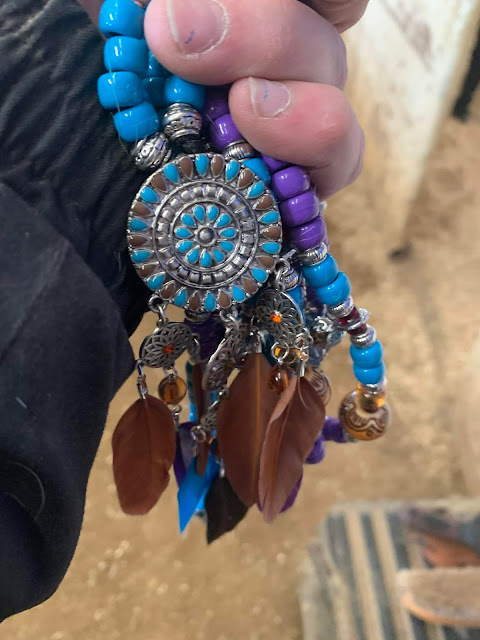 Center piece that hangs on his chest.

It was so much fun!!

We did shoulder in and haunches out, changes of bend and 10 meter half circles, half pass with changes, shallow serpentines with changes, pretty much anything Amanda could think to throw at us. I finally had to call a short break because I was starting to feel my exhaustion (bareback vs saddle - the struggle is real). I sat in the center of the arena and watched K get a very soft, very relaxed piaffe for a couple of steps and several moments of passage. Then we did another session with all three horses again. Laz led that round with Ashke and I taking up the rear behind Maggie. It was amazing. And like always, when I am not concentrating on each moment and just relaxing with the flow, his changes improved.

We talked about organizing a ride with six or eight of us, where we do a drill team ride. There's things its easier to figure out in a group and it teaches the horses to relax and move together. Plus, its fun to ride with your friends. I thought yesterday, while we were cantering behind Maggie, that Ashke doesn't rush or try to race the other horses at the canter in the arena, even when following another horse. I wish I could train that behavior on the trail as well, since we still struggle at the canter on trail.